The plaintiffs in the Hager V Attorney General case argue that journalists and their sources should be able to rely on the privilege of confidentiality particularly when investigating issues of public interest. But irrespective of the outcome of this case, New Zealand’s legislators need to address vague definitions within an inadequate law and establish a professional register of public interest journalists.
On Maori Television’s Media Take programme on Tuesday night, I joined Russell Brown and Toi Iti to discuss why journalism, journalists, and sources of information must be tightly defined in law so as to assure the privilege of confidentiality when pursuing public interest investigations. I argue that the time has come for a register of professional journalists to be established.The following is the background to this argument.

Irrespective of the outcome of the Hager case, the current law places media organisations, journalists, their sources, and the expression of public interest journalism, in jeopardy.

Put simply, the legal definitions of what is journalism, who is a journalist, and whether the identity of sources can be kept confidential, are vague. In June 2014, the High Court defined blogger Cameron Slater as a journalist.

The finding outraged some journalists who considered the title ought to be applied only to those who subscribe to the journalistic code of ethics and not bloggers who exhibit work contrary to elements within the code (ref. NZHerald).

Also in June 2014, a High Court judge ruled that a book written by David Fisher (a well-renowned and awarded New Zealand Herald journalist) about internet tycoon Kim Dotcom was not “news activity” and was not eligible for special legal protections (ref. NZHerald).

While the privilege of confidentiality is addressed in law the question of what is journalism, who can claim to be a journalist, and who can assume this privilege, is too vague. The current Act, and case law, presents as loose and ambiguous.

The absence of tight legal definitions causes an effect where the determinations of journalists to assert privilege are rendered unsound. As such, sources are left vulnerable, and serving the public interest through fourth estate endeavours is corroded.

In the High Court at Wellington last week, we heard submissionsthat allege abuses, that if accepted, would compel us to consider whether operational authorities of government (the Police) have operated contrary to the spirit of the Evidence Act, the Bill of Rights and the Search and Surveillance Act.

With respect to the Evidence Act, the judiciary is charged to consider ad-hoc arguments put to it through expensive legal submissions. In the meantime, the practice of public interest journalism in New Zealand is placed in limbo. For the record, the Evidence Act 2006 and its 2011 amendment define sources (informants), journalists, and news medium as:

Furthermore, the Act defines the conditions upon which anonymity may be, but not necessarily, relied upon:

(1)If a journalist has promised an informant not to disclose the informant’s identity, neither the journalist nor his or her employer is compellable in a civil or criminal proceeding to answer any question or produce any document that would disclose the identity of the informant or enable that identity to be discovered. (2)A Judge of the High Court may order that subsection (1) is not to apply if satisfied by a party to a civil or criminal proceeding that, having regard to the issues to be determined in that proceeding, the public interest in the disclosure of evidence of the identity of the informant outweighs—

(a)any likely adverse effect of the disclosure on the informant or any other person; and

(3)The Judge may make the order subject to any terms and conditions that the Judge thinks appropriate. (4)This section does not affect the power or authority of the House of Representatives. An order under subsection(2) may be made subject to the conditions (if any) the court thinks fit.

As you can see, the Act does not specify or define a difference between a person who may work as a journalist for a media company, a freelancer, or an independent investigative journalist. And, it blurs the lines between professional journalists and bloggers, those who occupy a space outside of the journalist code of ethics.

In fact, the code is not referred to at all even though it is the foundation upon which journalists work. Indeed, the law remains vague on defining what a journalist is. Most concerning, it is unclear on whether a journalist and her or his source should confidently assume the privilege of confidentiality.

Irrespective of the outcome of the Hager V Attorney General case, this enduring situation will certainly cause sources to disengage from public interest disclosures through fears of being identified and exposed to retribution, victimisation, and ridicule. In the absence of reliable definitions a vacuum exists. The situation is far from satisfactory, and in my view, it is time legislation was amended to:

The criteria, I argue, ought to be inclusive rather than exclusive and would consider a journalist applicant’s qualifications and/or experience of public interest journalism, and require adherence to the journalistic code of ethics, and, professional standards.

This issue isn’t just about journalists and their sources, it is about the health and function of New Zealand’s democracy, an issue that impacts on us all. I urge those who have an interest in investigative public interest journalism, fourth estate liberties, and our democracy to check out Jon Stephenson’s and Emily Menkes’ robust reportage of the Hager V Attorney General, Police, Manukau District Court case on EveningReport.nz. And also, please do digest another example of essential reading: Giovanni Tiso’s piece titled The Life and Death of the Political Author on The Pantograph Punch website. — 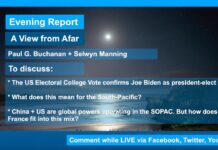 LIVE: A View from Afar with Paul Buchanan + Selwyn Manning on a Biden-led USA in SOPAC