ITEM ONE: New Zealand’s foreign affairs minister Murray McCully has urged representatives of Nauru Government to meet him in Sydney next week where he is expected to issue an ultimatum – that the Nauru Government must abandon its culture of regressive democratic practices. McCully has been persuaded to pressurise Nauru by a group of prominent academics, including former New Zealand prime minister, Sir Geoffrey Palmer, and former Parliamentary speaker, Margaret Wilson. Twenty nine senior academics made their concerns public via an open letter and stated: “Last year, the (Nauru) government forced out of office the island’s (then) only judge, and suspended most of the opposition from Parliament indefinitely. “The (Nauru) government has also prohibited local media from speaking to the opposition, and has closed down access to Facebook for Nauruan citizens, amongst other things. “The dismantling of an effective judicature… together with the silencing of the media, opposition and even ordinary citizens on Facebook means that the government of Nauru is now virtually immune from scrutiny of its actions.” Sir Geoffrey Palmer, who until recently lead the New Zealand Law Commission, urged Foreign Minister McCully to take a more aggressive stance against Nauru. The group believe Australia is not able to apply pressure to Nauru due to its asylum-seeker Pacific Solution policy. New Zealand gives $2.3 million a year in aid to the justice and education sectors in Nauru. It is understood that McCully will threaten to cancel the aid contributions should Nauru Government refuse to meet with McCully. ITEM TWO If you travel to New Zealand, and on arrival a uniformed officer approaches… then issues you with a card with a portrait of a dog on it… don’t worry we haven’t all lost the plot. New Zealand’s Aviation Security Service (Avsec) has decided to issue the cards to travellers to promote the work of explosive detector dogs that are helping to keep our airports and travellers safe. Each card displays a biography of a canine detective. And this week Fairfax media profiled Detective Kelcie, a German Shepherd Dog from Wellington. This dog’s card states Kelcie likes to swim, can smell a bone from over a kilometre away, and she has been trained to detect bombs and explosives. Apparently the cards have become quite popular with both adults and children, which goes to show a friendly message can sometimes serve a serious purpose. New Zealand Report is broadcast live on FiveAA.com.au and webcast on EveningReport.nz, LiveNews.co.nz, and ForeignAffairs.co.nz. –]]> 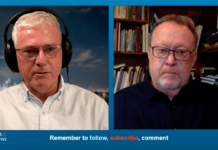