New Zealand Report with Selwyn Manning, Jane Reilly, David Penberthy, and Mark Aiston on FiveAA Australia – Record Rainfall Causes Flooding – Wellington shuts down + Body blocks busy intersection – Recorded LIVE on 15/05/15. ITEM ONE: New Zealand’s capital city Wellington came to a standstill yesterday (Thursday) after torrential rain caused flooding throughout the lower North Island. Roads in and out of Wellington were closed due to flooding, and the resulting gridlock brought the city to a standstill. The rain-storm caused schools to close, train services in Wellington were cancelled, and only limited bus services were operating giving priority to school children and the elderly. Flood-waters in the region caused streams and the Hutt River to overflow causing extensive flooding in Upper and Lower Hutt, Petone, Porirua and north-west suburbs right up to the Kapiti coast where a slip completely blocked off State Highway One – one of two primary routes in and out of the capital. Thousands of people were left stranded in the city overnight. Temporary accommodation was offered by Wellington residents and a Facebook page and Twitter hashtag was set up to guide people to places offering shelter, including the city’s central library which provided emergency accommodation for free. Rivers continued to rise throughout the afternoon and into the night, with flood-waters affecting residential and industrial areas. Weather watch New Zealand said fine weather is on its way, and the forecast for the weekend is improving. ITEM TWO: This item is rather macabre! The New Zealand Herald has reported how drivers at one of South Auckland’s busiest intersections were shocked after a body strapped to a gurney and wrapped in a sheet shot out the rear of a hearse. The body scooted into the middle of the cross-roads and blocked the busy Great South Road! The Herald reported how motorists Manase Fakapulia, his wife Alisi, and their 14-year-old daughter, Lineti, became horrified when the corpse fell from a Pacific Memorial hearse in front of them. Mrs Fakapulia said when the undertaker went to drive off “the body bag fell out on the trolley… No one wanted to get out, I could tell. I said ‘Babe, babe do you see what I see?’ and he just jumped out and helped lift it.” But when Mr Fakapulia tried to help the undertaker stuff the body back into the hearse “They couldn’t push it in because the boot kept falling down. He tried to open up the door two times, maybe three times but the door kept closing down…so my daughter walked out and opened up the boot.” Mrs Fakapulia said her husband was in shock after the incident: “He’s been up all night the last two nights thinking about it… he can’t sleep thinking about what happened.” The co-owner of Pacific Memorials undertakers, Carina Zhang, said the corpse had been inspected immediately after the incident and was unharmed. She has apologised to the family of the deceased. New Zealand Report broadcasts live on FiveAA.com.au Australia, and webcasts on EveningReport.nz, LiveNews.co.nz, and ForeignAffairs.co.nz.]]> 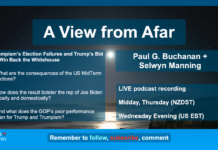