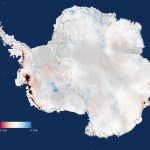 Much news in recent weeks from Antarctica, and none of it good. An Argentinian base on the tip of the Antarctic Peninsula recently reported a new high temperature record for the continent — 17.5ºC. A team of scientists has discovered that East Antarctica’s Totten Glacier — which drains a catchment that contains enough ice to raise sea levels by 3.5 metres — is vulnerable to melting caused by warm ocean water lapping underneath the ice and reaching inland1. Another group has stitched together satellite data on ice shelf thickness gathered from 1994 to 2012 and found that the ice shelves — mostly stable at the beginning of the period, are now losing mass fast2. From the abstract:

Overall, average ice-shelf volume change accelerated from negligible loss at 25 ± 64 km3 per year for 1994-2003 to rapid loss of 310 ± 74 km3 per year for 2003-2012. West Antarctic losses increased by 70% in the last decade, and earlier volume gain by East Antarctic ice shelves ceased. In the Amundsen and Bellingshausen regions, some ice shelves have lost up to 18% of their thickness in less than two decades.

The Amundsen region is home to the Pine Island Glacier, notorious for its current rapid loss of mass, and probably already past the point of no return for long term total melt. The map below shows the big picture: large red dots are ice shelves losing mass. Blue dots are shelves gaining mass. 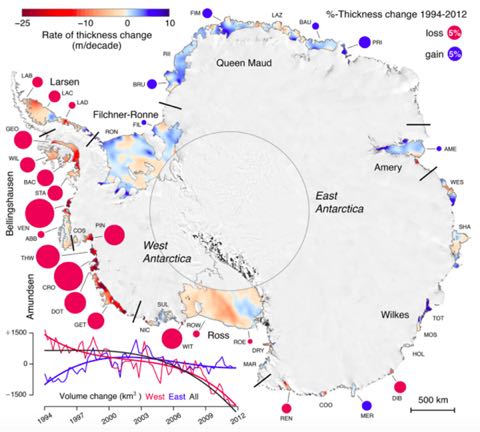 Ice shelves are important features of the Antarctic cryosphere. They buttress the ice piled up on the land, slowing down the flow of ice into the ocean. As the shelves lose mass, the flow of ice from the centre of the continent can speed up, adding to sea level rise. There’s a very good overview of the process — and the findings of the Paulo et al paper — in this excellent Carbon Brief analysis. The study of the Totten Glacier — one of the fastest thinning glaciers in East Antarctica — is the first to look at the detail of the sea floor and ice thickness in the area. The study finds that there are “tunnels” under the ice leading into a deep trough inland that cold convey warm water inland — the same process that has destabilised the Pine Island Glacier in West Antarctica. As the authors suggest, rather drily, “coastal processes in this area could have global consequences”. These signs of rapid changes around the coasts of Antarctica, together with hints that large parts of the huge East Antarctic ice sheet are at risk of following West Antarctica into the sea, suggest that even if sea levels only rise by a metre by the end of this century as the IPCC projected last year, the longer term picture will be a great deal wetter than that. After all, there is the equivalent of 60 metres of sea level rise locked up in East Antarctica. For a very good overview of the state of our understanding of what’s going on in Antarctica, I recommend a listen to VUW’s Professor Tim Naish being interviewed by Radio New Zealand National’s Kim Hill last Saturday. Naish even covers what’s happening to the sea ice down there, but a longer term study of the sea ice is getting under way, led by another VUW prof — Jim Renwick.