The area around New Zealand’s Parliament has today been the scene of a full-day ordeal of violence as police removed protesters whose behaviour prompted the Prime Minister to say there were “words I cannot use in this environment for what I saw”.

Early this morning, police launched an operation at Parliament and the surrounding areas in the capital Wellington “to restore order and access to the area”.

Before the sun rose, police could be seen getting information, holding shields.

As the sun set at the end of the day, about 150 protesters were peacefully facing police with riot shields on Featherston Street near the Railway Station — although other officers were clearing away signs of the earlier violence – bricks and bottles that had been thrown at them.

About 5pm, Prime Minister Jacinda Ardern addressed media and laid out just how she felt about the actions of the protesters.

Ardern said she was angry and deeply saddened to see Parliament desecrated in the way seen today, including the children’s playground being set alight.

An ‘illegal, hostile’ occupation
It demonstrated why the government refused to engage with the group, she said.

“It was an illegal occupation, they engaged in hostile, violent and aggressive behaviour throughout the occupation, and today that has culminated in the desecration of this Parliament’s grounds.

“I am absolutely committed we will restore those grounds and we will not be defined by one act by a small group of people.”

Ardern said there was a place for peaceful protest in this country, but “this is not the way that we engage and protest”. She said peaceful protest was the way to send a message, this by comparison was “a way to end up before the courts”.

How it played out
As the day began, some protesters had spent the night preparing for action, with cars and campervans moved to block streets.

As police moved into the area, a loud speaker blared instructions for protesters to leave or be arrested, while officers searched tents and checked no-one was in them before ripping them down.

As daylight set in, a clash between protesters and police followed.

But police gained significant ground, removing a number of vehicles and structures belonging to the protesters.

Leading up to midday, police in riot gear could be seen in among the operation. Pepper spray was used in response to protesters using fire extinguishers at officers.

About noon, Police Commissioner Andrew Coster said a point had been reached “where protest leaders were either unable or unwilling to effect substantial change”.

“We have been concerned that those with good intentions have been outnumbered by those willing to use violence,” he said.

“The harm being done far outweighs any legitimate protest.”

“We will continue this operation until this is completed.”

Commissioner Coster would not give a timeline, saying it would be when the job was done.

As the afternoon progressed, the situation heated up.

Just before 4pm, police said they had arrested 38 people and towed 30 vehicles.

Shortly after, police gained more ground including the Beehive forecourt and then began using fire hoses to spray protesters. 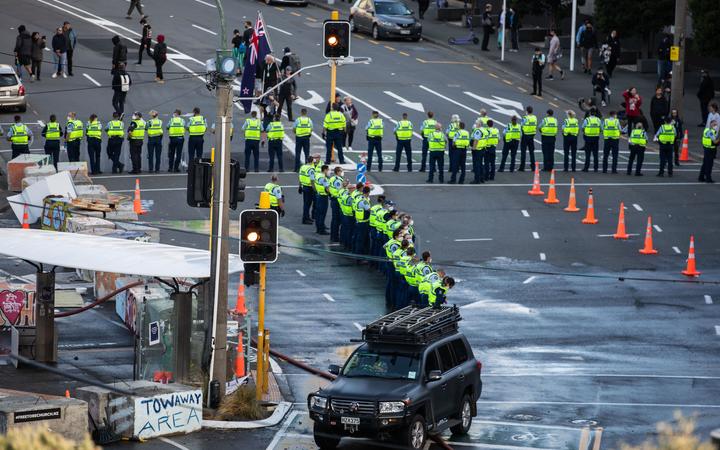 ‘Grounds reclaimed’
By 6pm, police had cleared Molesworth Street of all protester vehicles. They had arrested 65 people — that number would reach 87 by late Wednesday – and towed 50 vehicles.

Not long after, Assistant Police Commissioner Richard Chambers told Checkpoint that Parliament Grounds had been reclaimed after 23 days of occupation.

“We’ve made magnificent progress today our staff have done an incredible job, in very challenging circumstances.

“You will have seen that has been met with significant resistance and violence from some, and we are very pleased with the way that our staff dealt with it today.”

“They have a range of minor and serious but non-life threatening injuries. They are all receiving support and their families have been advised,” police said in a statement.

“Some injuries were lacerations caused by objects thrown at them. These included bricks and paving stones taken from the nearby streets, rocks, traffic cones, poles and wood from pallets. Staff were also showered with paint, petrol and water from a high-powered fire hose.”

Coming into the evening, police said they would continue efforts to clear Parliament grounds overnight.

There will be a substantial police presence in Wellington and at Parliament, and residents should be assured that police will continue to make their presence felt and keep them safe.

A small number of protesters remained near the Victoria University Pipitea campus.

Late on Wednesday evening, Speaker of Parliament Trevor Mallard said in a statement that Parliament’s grounds would be closed until further notice.

‘Recovery plan’
“A recovery plan for the grounds has been developed which includes working with mana whenua and coordinating offers of assistance from volunteer groups,” he said.

“Due to assessments of the grounds’ condition that must take place before that work can begin, and for health, safety, and sanitary reasons, I ask that all members of the public please stay away till advised otherwise.

“I’d like to take this opportunity to thank the police, Parliamentary Security, Buildings and Facilities, Health and Safety teams and all other staff for their continued efforts to keep everyone at Parliament and the surrounding areas safe.

“Their resilience and understanding, along with all of you who have been affected by this protest must be acknowledged and thanks given for everyone’s hard work and messages of support.”

More information about the recovery plan for Parliament’s grounds would be released when it was available, Mallard said.

“We will restore our beautiful grounds and I will keep you informed of developments.”