It’s been a big month, so far, for the Maldive Islands. Further, some of New Zealand’s leading cricketers (including captain Kane Williamson) are manuhiri in the Maldives. Indian Ocean neighbour – the Seychelles – has even more reported new cases per capita than the Maldives. I guess that neither country did nearly as well as New Zealand at keeping out visitors from Mumbai and New Delhi.

Otherwise, we continue to see quite a mix of countries from all over the world getting caught up in the present outbreak of Covid19. The second chart excludes countries with fewer than 500,000 people.

New Zealand should not be too smug. The latest Covid19 league tables include a number of island countries: as well as those mentioned there are Bahrain, Cabo Verde, Cyrus, Trinidad, and Guadeloupe. And French Guiana, while not technically an island, has the geopolitical characteristics of one.

Also of note is that the two small Latin American countries which New Zealanders feel particularly comfortable staying in – Uruguay and Costa Rica – are right up there in the top 10. So are all three of the Benelux countries, and France, and Sweden.

In Asia, of particular note is that Nepal is now suffering worse than India, and that Mongolia now presents a significant threat to China. (Presumably Mongolia got it from Russia.) Japan is also a worry; while it doesn’t have sufficient cases yet to make it onto the above league chart, in the last week it reported more cases per capita than the United Kingdom (though less than the United States).

In North America, Canada shows up on the second chart as having by no means gotten rid of Covid19. 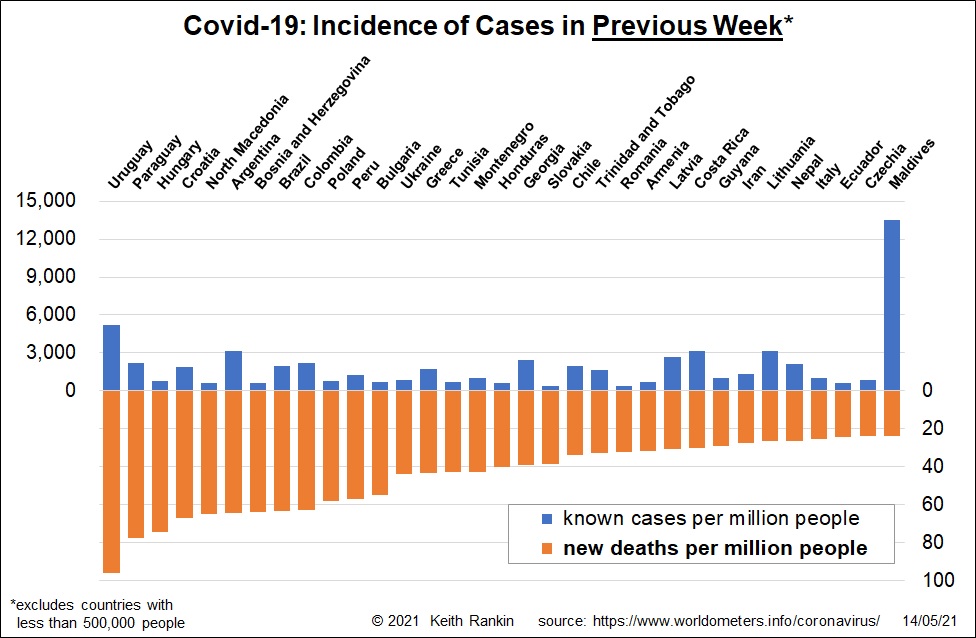 Re deaths, it is still South America and Eastern Europe which prevail. While many of these countries are improving, their recorded deaths are still much worse than India’s. While it is almost certainly true that neither India nor Mexico show up on these death charts due to undercounting, we cannot claim that India’s actual death rate is worse than that of, say, Bulgaria (12th on the list). And Nepal, which is on the death charts, clearly has Covid19 worse than India (though some parts of India – eg Goa and the parts bordering Nepal, and still New Delhi – will have more deaths per capita than Nepal, though not necessarily more deaths per capita than Kathmandu).

In Europe, Greece in particular is a concern. This is one of the ‘western’ countries which suffered much less from covid than the usual mercantilist suspects in the north and west of Europe. We also notice the Baltic States; all three – Estonia, Latvia and Lithuania – appear on one or other of these charts. Europe – the main culprit in the global spread of Covid19 – remains unable to shake it off.