While some competition is generally a good thing, bending to intense competition can damage businesses and society. Innovation is a much better route.

One of the most competitive societies I have had the privilege to visit many times is Singapore. The island is very densely populated, and the country features a similar level of GDP per capita as the US. Moreover, it has achieved this success in one generation, which is remarkable.

However, most of the economic growth has come from capital accumulation and labour, not productivity.

What this means is that the country has received more investment than others through attractive tax incentives and its strategic trade location on the Strait of Malacca. This is where East–West trade meets.

Singapore has also enjoyed very high rates of net migration and benefited from low-cost migrant labour, particularly in construction. It has not necessarily worked smarter.

You may be surprised to see how two supposed ‘rock star’ economies — Singapore and New Zealand — compare against some of the world’s most productive economies: 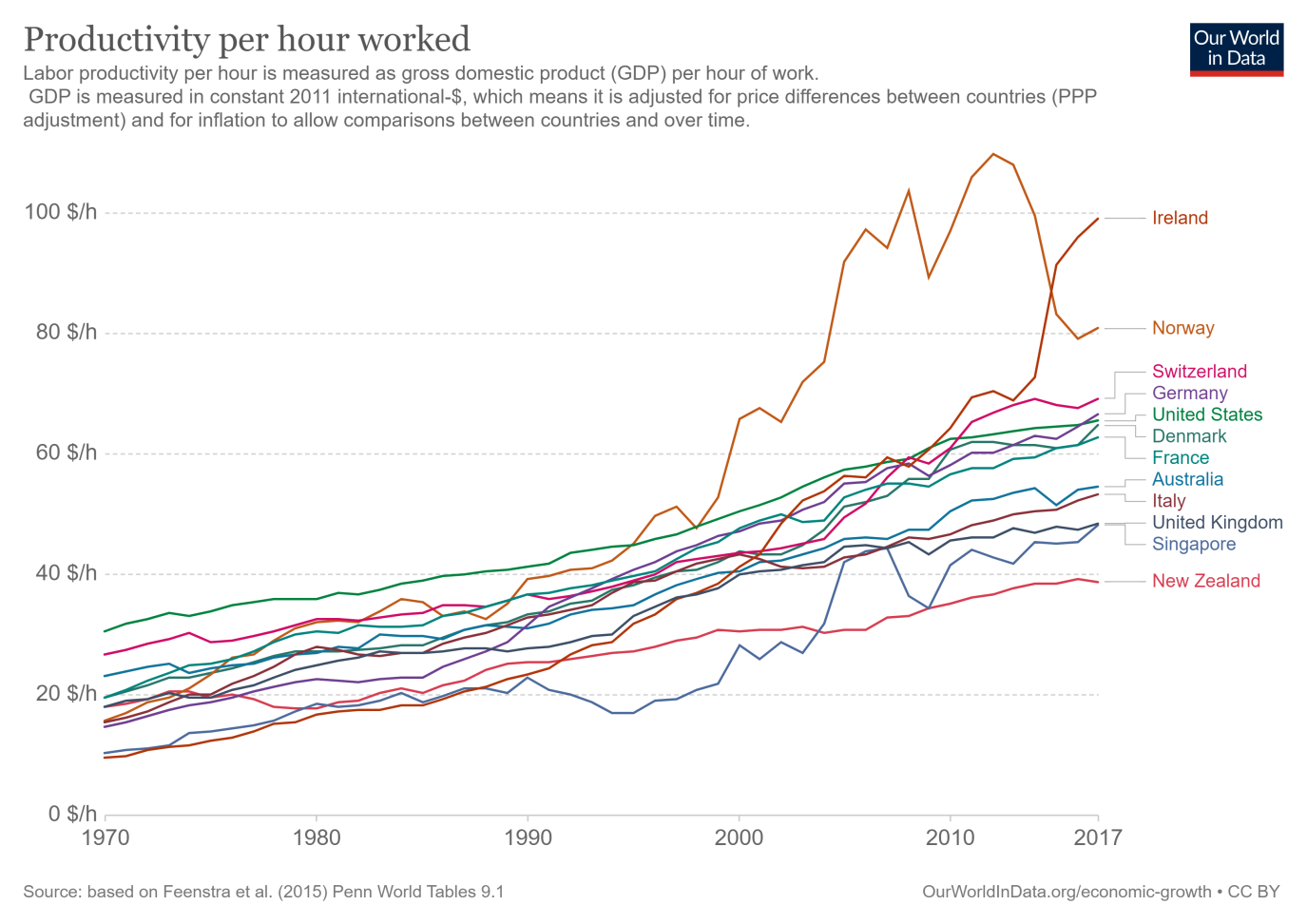 What do these productivity numbers really mean on the ground?

Perhaps to make it in Singapore, you need to compete aggressively in education. Then in the workplace. Notwithstanding a lack of physical space, this competition makes for a demanding society to live in. With anxiety rates above the norm, particularly for students, where a recent study showed 86% experienced grade stress — far above OECD averages.

I’ve added New Zealand into this comparison because it demonstrates a very different approach to competition. With low population density and abundant commodity exports, this country fails to add high value. In contrast to more productive exporters such as Germany and Ireland.

This demonstrates that if you want a productive, high-wealth society without the hardship of intense internal competition, the secret is innovation. Finding profitable niches without battling a stream of brutal competition.

Unfortunately, here in New Zealand, we seem to be attempting to apply the Singapore model of intense competition and previous high net migration, without the same levels of capital accumulation. Nor provision for sufficient infrastructure or housing — which Singapore resolved through government housing development and investment.

Drive into an upmarket Auckland suburb and you’ll witness the approach instantly.

I see people working long hours in gruelling corporate jobs to pay sky-high mortgages. Up at 5am for an early start to their 12-hour day. Unnecessary mortgage slavery perpetuated by decades of greedy bankers and careless government.

And I know I do not want this for my children. Honestly, I would rather they moved to a smaller centre. Or to Australia — well, maybe not Australia. But somewhere where they can do work they enjoy. Ideally innovate and find their own path. Without blind and often unproductive competition.

Simply, if you are in business — or in whatever you do — it could be more satisfying and enriching to innovate and find a profitable niche than compete with all the other graduates, homebuyers, social climbers, and corporate rats.

The path less travelled has power and beauty.

Here at Wealth Morning, we seek to invest in businesses that take this different path. They have something special about them. And can offer our readers growth and income.

We offer two opportunities in this regard:

And we will soon have a new mobile app enabling investors; one of the most innovative available in the market.

Watch this space. Stay innovative. A profitable niche could see you and your family sidestep the competition and succeed.

Simon is the Chief Executive Officer and Publisher at Wealth Morning. He has been investing in the markets since he was 17. He recently spent a couple of years working in the hedge-fund industry in Europe. Before this, he owned an award-winning professional-services business and online-learning company in Auckland for 20 years. He has completed the Certificate in Discretionary Investment Management from the Personal Finance Society (UK), has written a bestselling book, and manages global share portfolios. Simon is a shareholder of Wealth Morning.