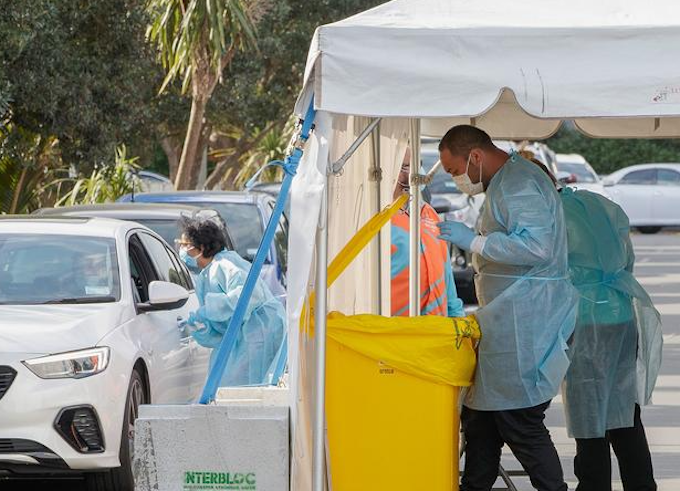 Auckland will remain in alert level three for a full two weeks, with the New Zealand government announcing that the country will remain at current covid-19 alert levels for 12 more days.

Prime Minister Jacinda Ardern and Director-General of Health Dr Ashley Bloomfield have announced the decision today at a briefing at the Beehive theatrette.

Ardern said Cabinet had unanimously decided today that the country would remain at the current alert levels.

But she said the settings would be reviewed on August 21.

“There is nothing to suggest we need to move to a level 4 lockdown at this stage.”

‘Strong health response best’
“Cabinet also does not want Auckland to be in level 3 any longer than is needed to ensure the outbreak is contained.

“The best economic response is a strong health response.”

Ardern said if it was found over the next seven days that the perimeter of the cluster was found, there would be time in the rest of alert level 3 to consider the situation.

“We have had a number of theories [about the source] that we have tried to chase down and we will continue to pursue.”

Ardern said closing the cluster did not mean the source had to be found – that had been demonstrated overseas.

“It is heartening to see at this stage that linkage between all the cases. If you make a wrong move with covid you can see the long term impact of that, and Australia has demonstrated that so we are looking to the experiences of others to inform our decision making.

“Hong Kong or the likes of Australia where they have taken a little more time, and existed with a more open environment while they’ve determined the perimeter of an outbreak, our view is it’s better to assess that with restrictions in place so we can get back to freedom faster.”

Decision on rest of NZ
A decision on moving the rest of the country out of level 2 would be made at the same time as choosing to move levels in Auckland.

The final game of the competition between the Blues and Crusaders scheduled for Sunday at Eden Park has been cancelled.

Dr Bloomfield said the government’s decision followed closely the information provided by himself and other public health experts.

“Together we have got rid of covid before. We have been world leading in our covid response. We can do all of that again. 1.4 million New Zealanders are carrying a heavy load for our team of 5 million right now.

“Here’s what I ask today. If you’re in Auckland, stay at home in your bubble. Wear a face covering if you can.”

Cabinet extends wage subsidy
It was important to remember that level 2 would allow for more economic activity than level 4, Ardern said.

“We will use what tools we have to protect jobs, incomes and businesses as well as people’s health.”

She said the wage subsidy scheme will be extended nationwide until the end of the level three restrictions.

Details will be finalised over the weekend.

“We do have an underspend currently for the second extension. We had an estimate that it would be roughly $2.6 [billion] to $3.9 billion, in terms of the drawdown on that. It’s actually come in closer to two [billion dollars]. There is already an appropriation we can draw on for a wage subsidy extension.”

Finance Minister Grant Robertson said the extended wage subsidy decision was made following the fact that a level 3 situation in Auckland would impact the rest of the country.

“Making the wage subsidy (extension) nationwide is a reflection of that.”

Changes to other business support schemes was being considered, including the Covid-19 leave scheme, he said.

Robertson said that was to ensure that people could have certainty about being able to remain at home.

“Our expectation is that access to the scheme will be similar to previously.”

Election date decision still to come
Ardern said today the most important focus was alert levels. She has not made a decision yet on the election date.

“I will make sure we have detail on the election. Keep in mind, the Electoral Commission has done planning around offering an election in a level 2 scenario.”

She said a decision would be made over the weekend.

“I’ve got another 48 hours. I’m going to use it, and I’ll come back on the question of the election.”

Face masks decision
Making masks mandatory had not been decided on yet.

Tokoroa was not in a higher alert level due to the clear link between the two cases there and another case, Ardern said.

“The reason we have treated that different to Auckland – Auckland is the source.”

She said the country was still a team of five million, and asked people who knew others in Auckland to reach out and be kind.

Over the weekend, roads and aviation borders out of Auckland would be assessed to see if any changes had to be made, Ardern said.

Dr Bloomfield said it was reassuring how early on in showing symptoms people were getting testing.

That was key in assisting quick containment and contact tracing, he said.

Modelling clusters not easy
Ardern said the latest modelling information she had was clusters were not an easy thing to successfully model.

“It’s when you have wider modelling and multiple clusters that modelling is more effective.”

But past clusters were a good indicator of how they worked.

Dr Bloomfield said the pattern of the spread over the next 7-12 days was critical.

“Partly is about the number and whether there is geographical containment and whether … there could be other spread.”

Ardern said having zero new cases was not necessary for moving back down levels.

She said the actions taken were to ensure the country could move back down alert levels as soon as possible.

The criteria for level 4 lockdown was “multiple outbreaks, multiple scenes of community transmission, just a much larger scale of things than we are seeing here”, Ardern said.

That was nothing that was being seen at the moment.

Cluster found ‘early in its life’
The government is attempting to get things back on track after the 102 days without community transmission came to an abrupt end on Tuesday. In less than 24 hours Auckland was in level 3 lockdown and the rest of the country had moved to level 2.

The prime minister said today there were signs the latest cluster has been found “early in its life”.

The earliest case to date is a worker at Americold who first become sick on July 31.

The source was still not clear, Ardern said, but genome sequencing “suggests it is not a case of the virus being dormant or of a burning ember in our community, it appears to be new to New Zealand”.

Today’s briefing comes in the wake of Dr Bloomfield’s announcement earlier today that there are another 12 new cases and one probable case of Covid-19 in Auckland and Waikato.

There are now a total of 48 active cases, with 30 linked to the community outbreak first identified in a family in South Auckland. The total number of confirmed cases of Covid-19 in New Zealand is now 1251.

Two of the 13 new cases are in Tokoroa.

Assisted dying referendum: people at the end of their lives say it offers a ‘good death’

Assisted dying referendum: people at the end of their lives say...

Curious Kids: could our entire reality be part of a simulation...