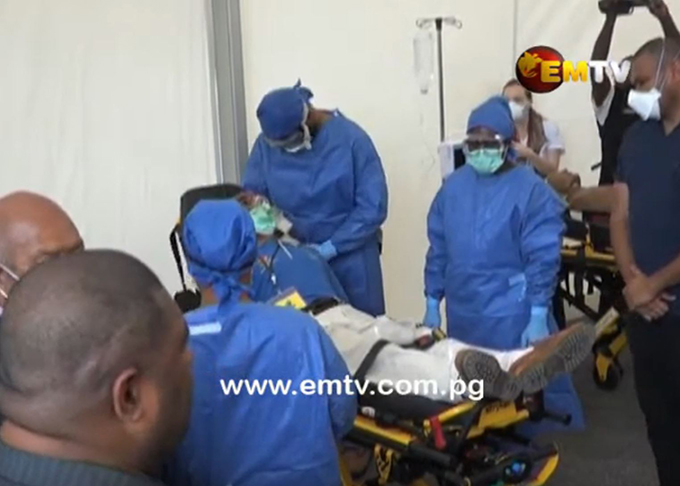 The 18th case is a 53-year-old man with no history of travel and who was experiencing fever, cough, shortness of breath and was tested via GeneXpert Testing.

The 19th case is a 39-year-old man who works as a medical officer.

Deputy Pandemic Controller Dr Paison Dakulala said that targeted testing strategy had given more efficient use of resources, rather than a wide net testing.

The focus is on testing symptomatic patients and pre-triaging is the key.

Dr Dakulala stressed his concern over the fact that the last five positive cases had been health workers.

“We have symptomatic people in our communities who are not staying home, but being socially active,” he said.

Infecting others
Dakulala stated that those people going to work, schools, moving around and possibly infecting others needed to present themselves for testing.

The National Control Centre has been challenged to upscale testing throughout the country while taking stock of quantities of Universal Transport Medium’s available locally and throughout the world.

The levels of PPE are at an acceptable level and staff are undergoing refresher courses around Infection Protection Control.

He said the argument that the country was immune from covid-19 or blessed with protection against the virus could easily be dispelled with what the statistics had shown over the last 5 days.

“We have initiated 200 tests and of those tests specifically, we have identified 7 positive cases,” he said.

Manning stressing that these rates were even alarming against world standards.

“This brings the number of active cases being isolated by the NCD PHA team to 7.”

“The capacity at Rita Flynn Emergency Ward for isolation is 70, at the current rate of infection per day and using exponential modelling, this has the potential to be reached by the end of the month” said Manning.

There were now calls for all public health authorities to take ownership of their areas of responsiblity and ensure testing was conducted at clinics.

Politics with Michelle Grattan: Concetta Fierravanti-Wells on aged care – what needs to be done differently

Australia’s cybersecurity strategy: cash for cyberpolice and training, but the cyberdevil is in the cyberdetail

Australia’s cybersecurity strategy: cash for cyberpolice and training, but the cyberdevil...

How the ‘National Cabinet of Whores’ is leading Australia’s coronavirus response...

How to keep your contact lenses clean (and what can go...

PNG surge in covid infections to 153 ‘expected’ and likely to...