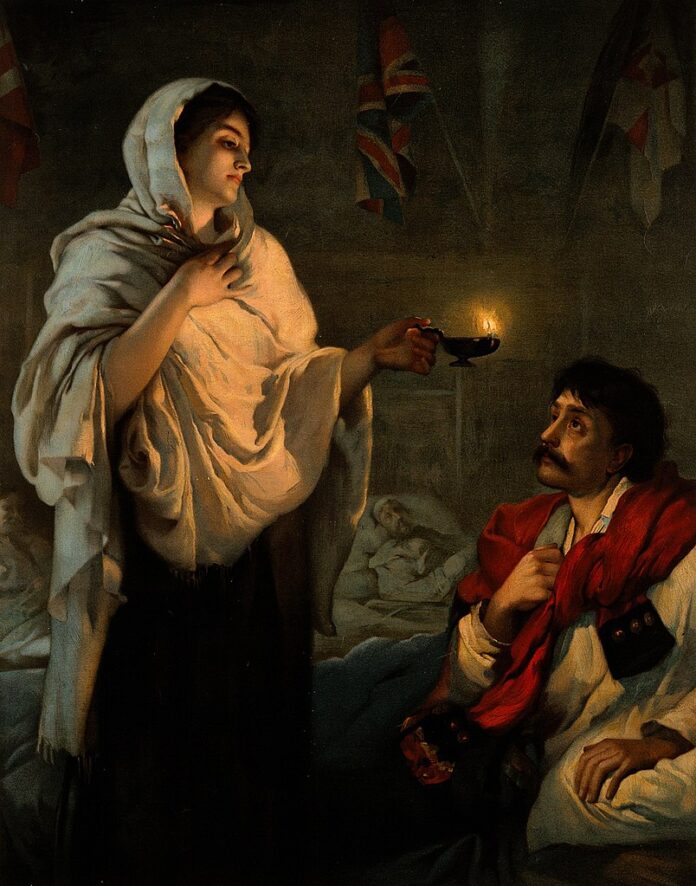 Florence Nightingale’s birth on May 12, 1820, is commemorated as International Nurses Day, honouring her founding role in modern nursing. Today would be her 200th birthday, so expect to hear even more about her.

Yet mention her name to nurses, the reaction tends to be an eye-roll. Why?

Read more: Florence Nightingale carried the lamp but modern nurses carry the can

First there is the impact of her myth. This myth was created when she headed a group of nurses to care for the thousands of British troops dying from disease during the Crimean War (1853-56).

The public revered Nightingale as the Lady with the Lamp, gliding around at night at Scutari Hospital in Turkey embodying selfless care. This image has been a burden for nurses as it ignores the skills involved in effective nursing.

Second, there was the impact of the real Nightingale. After the Crimean War, she spent most of her remaining 54 years as an invalid in her bedroom.

She wrote insightful reports and papers on reforming the army and improving public health. These were highly influential.

So too was her practical guide for women nursing family members at home, Notes on Nursing (1859). Later, her focus was on improving conditions in India.

In all her work, Nightingale aimed to prevent needless deaths from disease, as had occurred during the Crimean War.

In 1869, writing to one of the nurses she sent to Australia, Nightingale described her wartime experience as:

like a horrid spectre one is afraid of conjuring up out of the dark corner of one’s mind […] ready to spring, if one were not so overwhelmed with present work.

Her description resonates with the despair of those caring for COVID-19 patients with inadequate facilities today.

Meanwhile, the public insisted Nightingale reform civilian nursing. They poured money into a Nightingale Fund to establish a training school for nurses under her guidance.

Nightingale complained; she had not asked for the money nor been consulted about its aim. Eventually, in 1860, the Nightingale School of Nursing began at St Thomas’ Hospital, London. Though she tried to influence it, she had little to do with its management.

Nightingale also had little choice but to respond to the innumerable requests she received for advice, especially about hospital design and nursing.

Australians wanted a piece of her too

Australian hospitals and politicians equally clamoured to collaborate with the famed Nightingale.

One result was the spread of the hospital building style she favoured. These hospitals had separate buildings (pavilions) to help prevent cross-infection.

Inside were long, traditional wards that became known as Nightingale wards. They had high windows for light and ventilation; patients and beds were arranged for easy supervision. An example can be seen in the original buildings at Royal Prince Alfred Hospital, Sydney.

Read more: From army barracks to shopping malls: how hospital design has been a matter of life and death

Nightingale was not immune from imperialist prejudices. An example is her collecting statistics about indigenous health in British colonies.

As the Congress of Aboriginal and Torres Strait Islander Nurses and Midwives points out, her involvement did not help Indigenous Australians. Nor was she always successful.

While Australian hospitals and governments boasted they consulted her, the tyranny of distance was against them. In the 1860s, she commented on plans for new wards at Sydney Infirmary (now Sydney Hospital), but in the three months it took for her letter to arrive, the plans had changed.

It was certainly not her fault that, after the building was completed, it was discovered the architects had forgotten to include toilets.

Nightingale’s major contribution to Australian nursing occurred when she was asked to establish a school of nursing at Sydney Infirmary.

The new nurses were expected to be a secular version of the other trained nurses in the colony, the Sisters of Charity.

Read more: Florence Nightingale: a pioneer of hand washing and hygiene for health

Nightingale agreed to send nurses to Sydney, but largely left it to the matron of the UK’s St Thomas’s Hospital to choose them. Only later would Nightingale view the matron as someone who would not know “a sheep’s head from a carrot”.

The six nurses arrived in 1868. Most were inexperienced, including their leader Lucy Osburn. Nightingale tried to advise, but again the length of time letters took to arrive meant they were of little use. Problems mounted. Three years later, Nightingale disowned the project and deemed Osburn a failure.

Nightingale had been too hasty. Osburn learnt from her mistakes and persisted in her work. She implemented Nightingale’s key ideals including strict hygiene and conscientious, patient-centred nursing.

She demonstrated that nursing needed to be taught, rather than learnt from experience. As important, her nurses had reasonable pay and good living conditions in the Nightingale wing. Better conditions attracted nurses more able to implement the new standards of antiseptic practice.

Today’s nurses have reason to be ambivalent about Nightingale’s impact, but her ideals have helped ensure they are among the most trusted occupational group.

– ref. Which Florence Nightingale will we remember today? The ‘Lady with the Lamp’ or the influential writer and activist? – https://theconversation.com/which-florence-nightingale-will-we-remember-today-the-lady-with-the-lamp-or-the-influential-writer-and-activist-136497