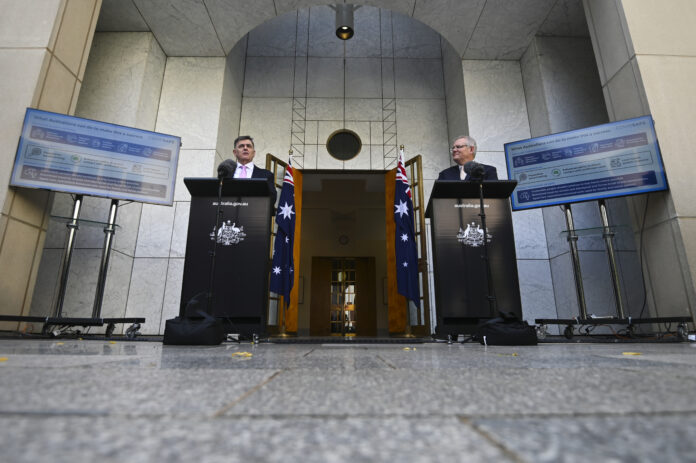 Source: The Conversation (Au and NZ) – By Tony Blakely, Professor of Epidemiology, University of Melbourne

The federal government has laid out a three-step guide for the states and territories for relaxing the physical distancing measures that have served Australia so well. We need to get back to school, work and play.

Australia is one of the lucky countries, blessed by being “girt by sea”, with a little bit more time to respond to the COVID-19 pandemic – and some good, strong early leadership (such as closing the border to China). We have used that time well, getting the case numbers down to not much more than New Zealand’s low rate, even though they faced a more severe lockdown. Some states, such as WA, may even have succeeded in eliminating community transmission.

Morrison’s language last week of expecting ongoing outbreaks suggests the goal is not to eliminate, but to suppress case numbers. This means accepting there will be grumbling transmission of the virus that pops up here and there as (hopefully) small outbreaks we can stamp out. But there is a risk of things getting out of control, with a second wave of infections possibly much greater than the first.

Read more: We may well be able to eliminate coronavirus, but we’ll probably never eradicate it. Here’s the difference

The best way forward in a suppression world

Think of it like a seesaw. On one side we have things we want back – the kids at school, going back to work, going to the pub, playing team sports. The problem is each one of these things will make it easier for the virus to circulate. If we went straight back to our old normal ways, it’s inevitable COVID-19 would take off as an epidemic that would swamp our health system – and cause substantial illness and death. We are not going to do that.

So we have to stack the other side of the seesaw with the counterbalancing of really good surveillance systems, testing, keeping our distance, and contact tracing (in which case, yes, the COVID-Safe App can help here).

With each of these things together, it will in theory allow us to get out and about without the epidemic taking off again.

But we do need to remember it is a theory the world has not tested before. We need to approach this cautiously, learn as we go, and generate the evidence in real time.

How do we do that? By relaxing measures in batches. Hit “release” on the first tranche, then monitor what happens very closely for three to four weeks. (And do not stuff it up by muddying the waters with more loosening ups before the three to four-week window has passed.)

If by three to four weeks, there has not been an unacceptable surge in cases, then release the next tranche and repeat the cycle. If and when the case load gets too high, we then have reached the tipping point for the seesaw – and we will need to stabilise or even tighten up again.

The issue, though, is how far we can get before the seesaw looks like it is tipping. We may get a rude shock; we may not get much of our liberty back before we have to equilibrate, and even go back into lock-down if there is a strong surge in cases.

The fear that is often mentioned is that of a “second wave” of infections that could surpass the first. That will happen in the states and territories that have not eliminated the virus if we open up too rapidly – hence the need for a stepped approach that can be stopped at or before the tipping point that will lead to an unacceptable second wave.

What is an acceptable level of community transmission in Australia?

Understandably, no politician has been brave enough to state publicly how much of an increase in cases is acceptable. But we will find out once restrictions are relaxed and cases start to inevitably rise.

The “acceptable” number of cases we want to remain under might be as low at ten cases per day – a number that would see low levels of death and severe illness. Alternatively, and perhaps better, we may use the number of outbreaks – something like no more than one new outbreak per week in each state or territory.

An outbreak could be defined as one new case with no detectable infection source, through to dozens of infections from the same source (as per the current abattoir outbreak in Victoria).

Learning to live with the virus in this suppression world is likely to be hard work. Which gives reason to pause and ask “is elimination really off the table?” For the country as a whole, probably. The government (and society) has decided to trade off the risk of more infections for some of our freedoms back. Which is understandable.

Everything about COVID-19 is calculated risk-taking. While some states, such as WA, may have achieved elimination, most have not. So loosening up now will likely mean elimination is unachievable, and suppression our only path forward.

– ref. The stepped approach out of lockdown is the only way forward, but how much we’ll allow the curve to rise is still an unknown – https://theconversation.com/the-stepped-approach-out-of-lockdown-is-the-only-way-forward-but-how-much-well-allow-the-curve-to-rise-is-still-an-unknown-138260