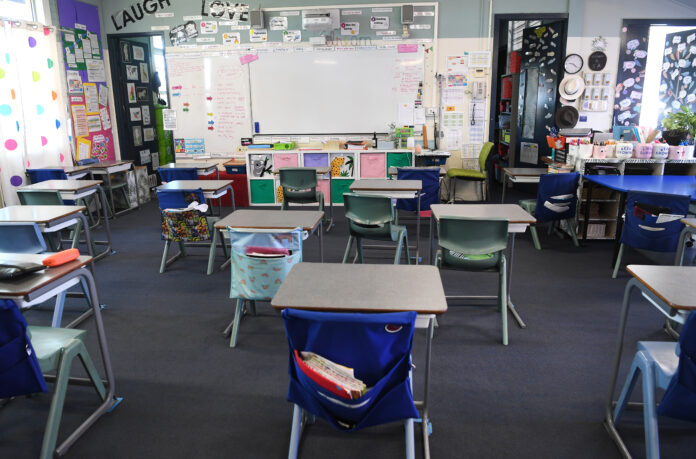 Conflict between the federal and state governments broke into the open yesterday when Education Minister Dan Tehan attacked, and later apologised to, a premier over a sensitive element of the coronavirus pandemic’s management: school education.

The episode saw Tehan strenuously criticise Victorian Premier Daniel Andrews over his government’s refusal to allow face-to-face teaching for all students to resume in the state’s schools.

Tehan’s attack not only breached Prime Minister Scott Morrison’s advice so far in the pandemic that Australians should follow their premiers’ advice, but also, embarrassingly, came as the Victorian government announced that a Melbourne teacher had tested positive to COVID-19, with the resulting closure of the Meadowglen Primary School.

Schools should be peaceful sites for the education and development of our children – at least, that’s the ideal. For the past half-century, they have instead often been flashpoints for philosophical and political struggles that capitalise on the ferocious passion of parents wanting what’s best for their children.

Tehan’s intervention yesterday was a miscalculated escalation of the campaign the Morrison government began last week to pressure reluctant state governments to resume face-to-face teaching in government schools. It is something only the states can authorise, since they have constitutional authority over school education.

The Morrison government is also using its spending power in the private system to pressure private schools to do the same.

Read more: View from The Hill: So you wanted to spend more time with the kids?

Federal health advisers say face-to-face teaching is safe, judging on balance that its educational benefit outweighs what so far appears to be a modest health risk for most children. However, the resumption of face-to-face teaching is not merely a matter of teachers and children in classrooms. It’s also a trigger for mass people movement at a time the lockdown has not completed its job.

The vast majority of people know and understand that a million kids, from the Catholic, government and independent sector, roaming around Victoria going to and from school, tens of thousands of teachers, hundreds of thousands of parents doing drop-offs and pick-ups – that’s hardly staying at home, is it? It’s hardly consistent with doing anything other than spreading the virus.

The stand-off is the result of a steady shift over five decades in the pattern of school funding in Australia. Cheryl Saunders, emeritus professor of law at the University of Melbourne, argues it has led to a “bizarre division between the governance arrangements for public and private schools that … is now becoming unsustainable”.

Historically in Australia, government funding only went to free and secular public schools. The federal government, lacking constitutional responsibility for school education, did not fund them at all.

Conservative prime minister Robert Menzies broke with that tradition in 1964, initiating “state aid” for non-government schools. Two years later, at Gough Whitlam’s instigation, the Labor opposition changed its policy in that direction too.

Demographic as well as political factors drove this change. The post-war baby boom triggered a rapid expansion in school numbers that state governments, along with the Catholic school system, struggled to finance. Overcrowding and under-resourcing were rife.

Federal governments of both political persuasions sent money to the states for schools in the form of “tied grants”, with conditions attached. State governments were not compelled to accept the conditions attached to the grants, but if they did not, the money could be withheld. This system of tied grants over time vastly expanded federal spending on schools, but it did not change the federal government’s position from one of influence to one of authority over them.

There was also a profound difference between the Coalition and Labor approach to school funding. Coalition governments explicitly, and over time aggressively, favoured private schools. In contrast, Labor adopted a “needs-based” approach, allocating funding according to student need, irrespective of whether a school was government or private.

Liberal prime minister John Howard lavishly expanded private school spending. The dramatic growth in religious schools under his government, from Christian fundamentalist through to traditional Islamic schools, hastened the fragmentation of the Australian school system. Despite declining religious faith in Australia overall, taxpayers subsidise one of the highest concentrations of religious schools of any country in the developed world.

Once established, bloated federal spending on private schools has proved hard to unwind by the occasional Labor politician brave enough to propose even relatively modest changes to it. For example, Mark Latham proposed when Labor opposition leader to redistribute money from the richest private schools to needy government and non-government schools. With the LNP in power federally for 18 of the past 24 years, the pattern of massive federal private school spending has been cemented into the budget.

The Morrison government’s inability to direct schools to resume face-to-face teaching at this point in its management of the COVID-19 pandemic underlines its relative powerlessness, despite its massive spending on them. Saunders’ warning about the constitutional fragility of the government’s manipulation of grants to non-government schools to force the issue should give it pause for thought.

Read more: Sending children back to school during coronavirus has human rights implications

The contemporary history of the coronavirus crisis shows the premiers’ cautious approach overall has in any case been correct to date.

The decision in March of NSW Premier Gladys Berejiklian and Daniel Andrews to get out in front of the federal government’s foot-dragging over a lockdown gave Morrison little choice but to pivot behind the two biggest states on the issue.

The premiers’ informally coordinated action spurred a shift in federal stance that undoubtedly saved many lives. It also saved the Morrison government from the political embarrassment of what in retrospect was clearly a catastrophic crisis management misstep in the making.

The premiers may well be right, too, about holding off a bit longer on the resumption of face-to-face teaching at this point in the coronavirus curve.

– ref. Schools have been ideological battlegrounds in the past. In the coronavirus crisis, they are again – https://theconversation.com/schools-have-been-ideological-battlegrounds-in-the-past-in-the-coronavirus-crisis-they-are-again-137250