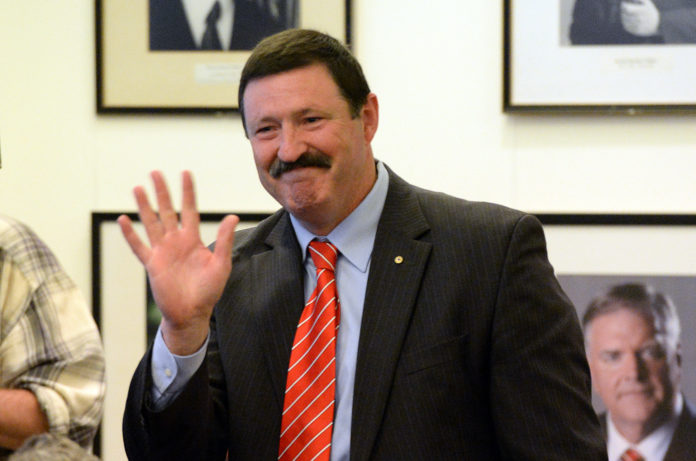 Scott Morrison and Anthony Albanese could be set for a face-off at a by-election in the marginal NSW seat of Eden-Monaro.

Labor MP Mike Kelly is expected to announce this week whether he will quit parliament. He has suffered continuing serious health problems.

Kelly, formerly a lawyer in the military who served in Iraq and on other overseas deployments, won the seat in 2007, lost it in 2013, and won it back in 2016. He is considered to have a strong personal vote.

Eden-Monaro is on a margin of about 1%. It has a large rural and coastal hinterland and contains the major town of Queanbeyan, which abuts Canberra. The seat has a high proportion of public servants.

Parts of the electorate were hit by the recent bush fires.

On the Coalition side, NSW deputy premier John Barilaro, the Nationals leader whose state seat is in the electorate, has left open the option of running, saying he is “not ruling anything out”.

If he won the seat, this would carry the risk of fresh instability in the federal Nationals. Deputy Prime Minister Michael McCormack could find himself under pressure from the ambitious Barilaro.

The Nationals polled only 7% in the seat at the last federal election but Barilaro is popular and has high recognition. He has good support in Queanbeyan.

Liberal senator Jim Molan, who lives in the electorate, might have a tilt at Liberal preselection.

He said he was keeping “all my options open”, although he also said, “I have important causes to continue to fight for as a Senator”. When he won Senate preselection for a casual vacancy, it was on the basis he would only serve the remainder of this term.

In a series of tweets, Molan predicted both the Liberals and the Nationals would run if there were a byelection.

Molan also noted, “We all know that by-elections are notoriously difficult to win, especially for governments. No incumbent government has won a seat from an opposition in the last 100 years.”

NSW transport minister Andrew Constance, a Liberal who holds the state seat of Bega and had a high profile during the bushfires, has also been mentioned as a possible contender for Liberal preselection.

Campaigning in a by-election this year would be constrained by the coronavirus, which will affect interactions even after most restrictions are rolled back.

His handling of the virus crisis has seen a big rise in Scott Morrison’s personal ratings, with this week’s Newspoll showing his approval at plus 40. Anthony Albanese is on plus 11. Morrison leads Albanese as better PM 56-28%.

But on the two-party vote the Coalition and Labor are on 50-50%, compared with the Coalition’s 51-49% in the previous poll.

A snapshot of how seriously the Australian economy is suffering from the coronavirus crisis will be given by treasurer Josh Frydenberg when parliament resumes on Tuesday May 12 for three days of sitting.

Frydenberg’s statement will come a day after the scheduled review of various restrictions, expected to see the nation starting to reopen a range of activities.

Frydenberg says the government will also provide an update on the economic and fiscal outlook in June, after the March quarter national accounts.

The virus crisis has meant the budget has been pushed back to October, with Morrison signalling last week he wants it to contain significant reform measures.

Last week Reserve Bank governor Philip Lowe said Australian output was likely to fall by 10% in the first half of 2020 and unemployment was likely to reach 10% by June.

On the health side, the government is delighted with the initial public response to its tracing app which had more than two million downloads by late Monday.

The Victorian government has announced a testing blitz to set the state up for the potential easing of restrictions. Up to 100,000 people across the state are to be tested over the next fortnight.

Premier Daniel Andrews and state health minister Jenny Mikakos said this would “help inform decisions about slowly lifting restrictions, ahead of the State of Emergency being reviewed on 11 May”.