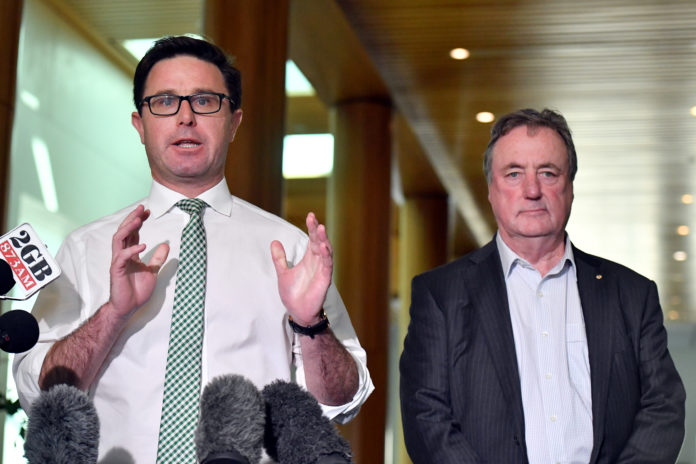 Perhaps surprising is the report’s sparse discussion of the Murray Darling Basin Plan, which has been the focus of irrigators’ anger and denunciation by National Party leaders: Deputy Prime Minister Michael McCormack and NSW Deputy Premier John Barilaro.

For the new report, Keelty investigated the changing distribution of “inflows” – water flowing into the River Murray in the southern states.

Climate change has brought the inflow to just a trickle. This dramatic reduction over the past 20 years is what Keelty has described as “the most telling finding”.

Read more: The Murray-Darling Basin scandal: economists have seen it coming for decades

He also investigated the reserve policies under which the three states choose – or don’t choose – to hold back water in Hume and Dartmouth Dams to manage future droughts.

Keelty says there’s little transparency or clarity about how much water states are allocated under the Murray Darling Basin Agreement (the arrangement for sharing water between the states which underpins the Basin Plan). This failure in communication and leadership across such a vital system must change.

One major finding of Keelty’s inquiry is that the federal government has little power to change the MDB Agreement between the three states, which was first approved in 1914-15. Any amendment requires the approval of all three governments.

To increase the volume of water provided to NSW irrigators, South Australia and Victoria would need to agree to reduce the volumes supplied to their own entitlement holders. That will not happen.

Why has the agreement lasted so long?

Over the past century it has proved robust under a wide range of conditions. Its central principle is to share water with a proportion-of-available-flow formula, giving each state a percentage of whatever is available, no matter whether it’s a lot, or not much.

After receiving its share of the River Murray flows, each state is then free to manage its allocation as it wishes.

Historically, South Australia and Victoria have chosen to reserve or hold back a larger proportion of their shares each year in Hume and Dartmouth dams to use in future droughts, compared with New South Wales.

In part this difference derives from the long-term water needs of orchards and vines in South Australia and Victoria, in contrast to annual crops such as rice and cotton in New South Wales.

As a result, South Australia and Victoria have a higher proportion of high security entitlements. That means they receive 100% most years. Only in extreme drought years is their allocation reduced.

NSW, on the other hand, has a higher proportion of low security general entitlements. In dry and normal years they receive a proportion of their entitlements. Only in wet years do they get the full 100%. (These differences in reliability are reflected in the cost of entitlements on the water market.)

What’s more, each state makes its own decision about how its state allocation is shared between its entitlement holders (95% of water goes to irrigators the rest supplies towns and industry).

South Australia chooses to distribute a much smaller proportion to its entitlement holders than New South Wales. It also restricted the number of licences in the 1970s. That combination ensures a very high level of reliability in supply. Victoria took a similar approach.

Read more: 5 ways the government can clean up the Murray-Darling Basin Plan

But New South Wales did not restrict licences until the 1990s. It also recognised unused entitlements, so further reducing the frequency of years in which any individual would receive their full allocation of water.

When climate change is taken into account these differences between the three states result in their irrigators having significantly different risk profiles.

The climate change threat to the basin is very real

Despite climate denial in the National Party, the threat is very real in the MDB. The report describes a massive reduction in inflows over the past 20 years, approximately half compared with the previous century. One drought could be an aberration, but two begins to look like a pattern.

The report also suggests that in many cases irrigator expectations of what should be normal were formed during the wet period Australia experienced between the second world war and the 1990s.

Added to this have been business decisions by many irrigators to sell their entitlements and rely on the water market, a business model based on what now seems like unrealistic inflow expectations.

In effect, successive New South Wales governments – a significant part of the state’s irrigation sector in the southern part of the state and the National Party – gambled against the climate and are now paying a high price.

In desperation, they’re focusing on alternative sources. This includes the water in Hume and Dartmouth held under the reserves policy of the two other states; environmental entitlements managed by the Commonwealth Environmental Water Holder; the very large volume of water lost to evaporation in the lower lakes in South Australia; and the possibility of savings resulting from changes to management of the system by the Murray-Darling Basin Authority.

Failure in leadership and communication

For reasons already outlined, the state reserves policy is not likely to change and use of the Commonwealth Environmental Water Holder environmental water entitlements would not be permitted under current legislation.

Management of the lower lakes is being reviewed through another investigation so is not discussed in the report. The report also states that management of the MDB Authority is subject to regular detailed assessment by state governments, and they have assessed its performance as satisfactory.

Read more: A referendum won’t save the Murray-Darling Basin

However the report was critical of the performance of all MDB governments with regard to leadership and communications suggesting that failures in those areas were largely responsible for the public concern which triggered its investigation.