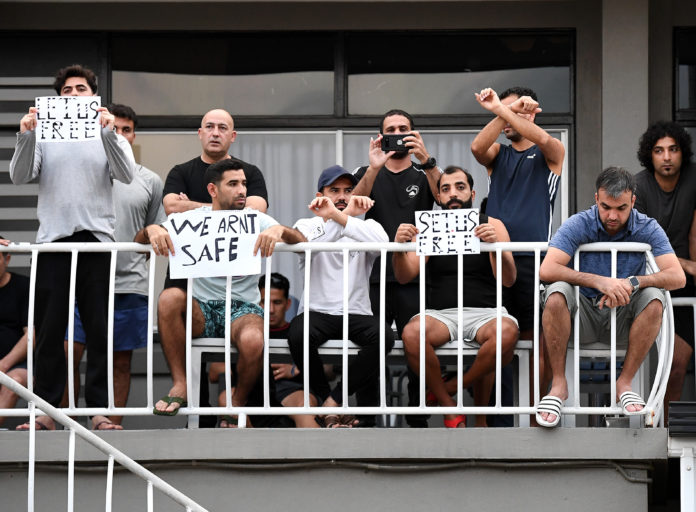 In Australia, much of the discussion about detaining asylum seekers has focused on offshore sites on Manus, Nauru and Christmas Island.

But, as the recent ABC drama series Stateless reminds us, detention of asylum seekers within Australia has a longer history and continues today.

The Department of Home Affairs recorded 1,436 people in detention on mainland Australia at the end of February.

Read more: Stateless review: remembering a time when we were outraged

Not all are in the standard detention centres. We’ve seen a return of hotels used for detention and that’s a worrying trend, particularly in light of the COVID-19 pandemic. The government has been told hotels are “not appropriate places of detention”.

The use of hotels as Alternative Places of Detention (APOD) is not a new practice. For example, the Asti Motel in Darwin was used to detain unaccompanied minors and families with children in 2010.

Hotels are being used now to detain asylum seekers, specifically at Kangaroo Point Central in Brisbane and the Mantra Bell City in suburban Melbourne.

Most of those detained in these hotels were transferred throughout 2019 – following several years of detention in Papua New Guinea and Nauru – under the now-repealed Medevac provision.

Some media have portrayed the use of hotels to detain asylum seekers as a form of luxury accommodation at taxpayers’ expense.

In Queensland, The Courier Mail adopted this tactic when it said the 45 asylum seekers detained in Brisbane were in a four-star, city hotel costing Australian taxpayers more than $410,000 a week.

No luxury for ‘guests’

But this supposed luxury accommodation is indisputably a site of detention, rather than a comfortable holiday, with untold impacts on physical and mental health.

Those detained in Brisbane and Melbourne are typically held two or more to a room, under the constant watch of security officers. They are allowed use of the hotel’s gym facilities for only a few hours a day at most.

In order to physically go outside, those held at Kangaroo Point Central or the Mantra Bell City must be transferred by bus to other immigration sites in Brisbane and Melbourne, after being subjected to body pat-downs, where they may briefly access the exercise areas.

Independent reviews of the detention situation in Australia are relatively minimal and infrequent.

The Commonwealth Ombudsman, tasked with immigration detention oversight since 2011, released its first review to the public only in February of this year.

But this report only covers its inspections from January to June 2019, at roughly the time the hotels were brought into use. It said:

During this reporting period, we continued to highlight our concern about the facilities provided in the non-medical APODs. These include shortfalls in daily access to outdoor recreation areas, dining areas also being used as multi-purpose rooms, and medical and mental health clinics that do not support the detainees’ right to private consultations.

The Australian Human Rights Commission conducts periodic reviews of detention sites. It said in its May 2019 report:

… hotels are not appropriate places of detention, given their lack of dedicated facilities and restrictions on access to open space.

It found the restrictions on the mobility of detainees was significantly greater within hotel APODs than in any mainland detention centre.

Hotels for ‘short period’ use

In response to the AHRC’s recommendation that hotels only be used in exceptional circumstances or for very short periods of detention, the Department of Home Affairs responded:

Those held in the hotels in Brisbane and Melbourne – many previously transferred due to severe physical and mental health issues in Manus or Nauru – have described how their health concerns have been exacerbated since arriving.

Most say they have now been detained for several months, often spending 19 hours or more per day in their rooms. That’s anything but a “short period” of detention.

The COVID-19 crisis has generated considerable additional concern for the hotel detainees, who have reported minimal or non-existent measures to prevent an outbreak.

A guard at Kangaroo Point Central tested positive for COVID-19 on March 18.

Visits to detainees have been suspended, as well as transfers to the Brisbane and Melbourne immigration centres for outdoor recreation time. The cramped conditions in hotel rooms, common spaces and eating areas have not been addressed. The Ombudsman has now been banned from conducting inspections.

Across the globe, calls and petitions have been made to “decarcerate” or reduce the number of people in prisons and detention centres in light of COVID-19.

In the UK, the Home Office released almost 300 asylum seekers from detention, roughly a quarter of the total detained.

In Australia such action has yet to be taken. Protests within the hotels and immigration detention centres, statements by lawyers and health experts, and online petitions are increasing pressure on the government to release detainees into the community.

Yet, rather than reducing the numbers, transfers are instead increasing numbers within hotels. Last week, detainees at the Brisbane immigration transit accommodation in Pinkenba (up to 204 men according to February statistics) began to be transferred to the Kangaroo Point Central Hotel.