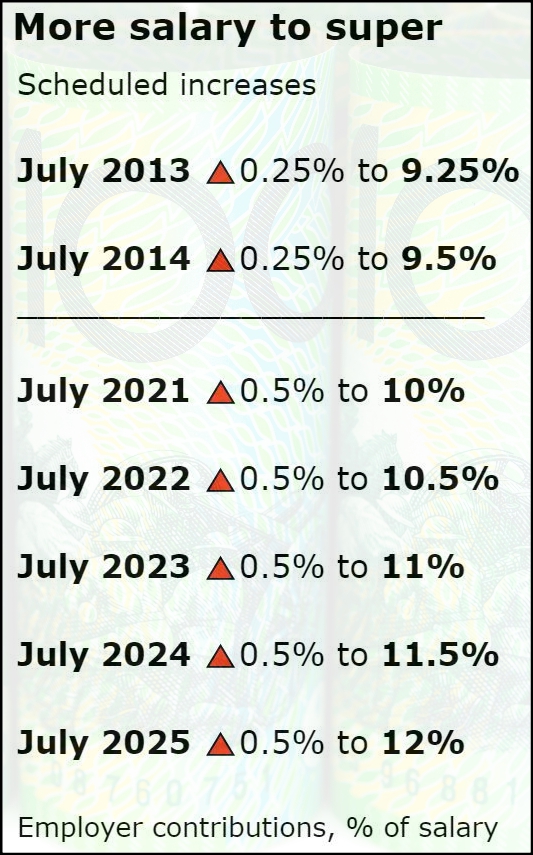 Understandably, given we are in a crisis, the government has baulked at including superannuation contributions in the A$140 billion worth of $1,500 per fortnight wage top-ups it will be directing to six million Australians.

As the JobKeeper fact sheet puts it:

It will be up to the employer if they want to pay superannuation on any additional wage paid because of the JobKeeper Payment.

This is in the middle of a treasury led Retirement Income Review that is considering, among other things, whether the current 9.5% of salary contribution should be increased to 10% and then to 10.5% and then in a series of annual steps to 12% by 2025.

In considering the idea (it is actually leglislated – if the government decided not to go ahead it would need to unleglislate it) it helps to go back to basiscs.

The blinding power of money

The trouble with money is most people are so busy looking at it they are blind to what’s going on in the real economy – by which I mean the production and distribution of goods and services.

Our current material standard of living depends almost entirely on our current ability to produce goods and services (assuming for a moment imports are funded by exports).

Similarly, our standard of living in 2050 will depend almost entirely on our capacity to produce goods at that time. This means it has little to do with how much money is in our superannuation accounts.

Part of the justification for superannuation is to get us more resources in retirement, and it will for those who have big super balances, but it won’t do much to change the total amount of resources available at the time.

The limits to saving

Often it’s put another way. We are told baby boomers need to fund themselves in retirement, instead of relying on pensions paid for by those who are still in the workforce.

But imagine a perfect scenario where every retired baby boomer has $1 million in super, freeing those still working from the tax burden of funding the pension.

When the boomers are using their super to buy services and goods, who are they going to take them away from?

You guessed it, those still working.

They’ll be giving up resources to support the retirement of boomers, whoever supplies the cash.

If there was no superannuation and the government instead taxed current workers in order to fund retiree consumption, the real cost to workers would be the same. That cost is the provision of goods and services to retired people instead of workers.

Individuals can indeed save for the future by foregoing some goods and services today in order to have more of them later. Financial planners refer to it as consumption smoothing.

But an entire society can’t save for the future through consumption smoothing.

If Australia as a whole consumes fewer goods and services in one year, it is likely to reduce rather than increase its future wealth because it is fully utilised labour and capital that drives investment and productivity.

That’s what lies at the core of misunderstandings about the superannuation system. Foreign investment aside, it can’t allow an entire society to save for the future to support itself in retirement.

It can skew the distribution of resources in future years, away from those of working age and those with low super balances towards those with (tax concession subsidised) high super balances.

If our goal is an adequate and sustainable income in retirement for all Australians, our main priority ought to be ensuring that those remaining in the workforce are productive enough to support themselves, their children, those without work and those who have retired.

In other words, if you’re worried about the economic impact of our ageing population on our material standard of living (and there are reasons not to be worried) you would want our focus to be on productivity, rather than retirement savings.

Like most important economic questions, the best retirement income system is not, at its core, solely an economic question, it is also a moral and political question about distribution and inequality.

So, with that in mind, here’s what my personal moral (plus economic) analysis tells me would be the best retirement income system.

We could give the money back, slowly

The best way would be to get rid of compulsory superannuation, give all the money back to account holders (slowly to avoid too much inflation), mandate a 9.5% pay rise in its place and redirect the tens of billions of dollars we currently spend on superannuation tax concessions toward rent assistance, a higher Newstart allowance and a higher pension.

With retired renters better looked after, a moderate (say 20%) increase in the pension, and continued indexation of the pension to wages, no retired Australian would be living in poverty.

– ref. The coronavirus response calls into question the future of super – https://theconversation.com/the-coronavirus-response-calls-into-question-the-future-of-super-133906