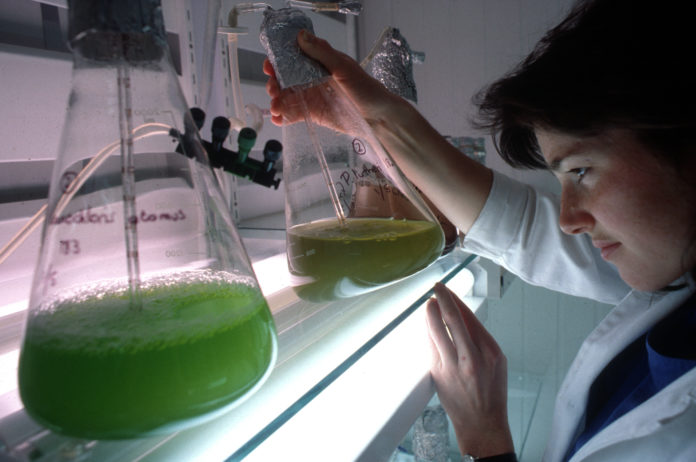 As the climate warms, the land we use for growing energy-intensive crops such as wheat and corn is becoming less productive. We need to find ways to feed the earth’s growing population that isn’t so burdensome on the environment.

One potential solution is to cultivate microalgae – microscopic aquatic organisms that are packed with nutrients. Microalgae are single-celled organisms that look like tiny pills and taste a bit like grass.

They are relatively easy to cultivate and have several advantages over animal and plant protein.

Algae don’t require pesticides to sustain their productivity. Algae can also be grown in wastewaters (water that has been used in the home or in some industrial process), taking up nutrients and other dissolved substances into their biomass. This results in fewer contaminants being released into the environment and less pollution in our waterways.

2. It can be grown year-round

High growth and reproduction rates mean microalgae can double their biomass in as little as one to three days, depending on the time of the year. While their growth rate is slower in winter, they are not limited to a growing season, such as plants, or a long maturation period, such as animals.

This means microalgae produce more biomass on a given area of land per year, than animals or plants.

High growth rates also mean frequent harvesting. This makes microalgal cultures more resilient to sudden or extreme weather events, where production losses may be only several days of growth rather than the entire annual crop.

Read more: Micro solutions for a macro problem: How marine algae could help feed the world

3. It has more protein

The higher growth rate of microalgae and ability to produce their own food from the sun, means microalgal protein yields are more than 100 times greater than animal-based proteins, including beef, eggs and dairy (0.01 – 0.23 tonnes per hectare per year).

4. Farms can be built anywhere

Algae production systems don’t require arable land. They comprise either open ponds or closed vessels with a light source, known as photobioreactors. The systems can be built almost anywhere, including non-productive land or in the sea.

Open ponds are shallow (between 10 and 50 cm deep), and the algae culture is gently circulated by a paddlewheel. Closed photobioreactors consist of an array of tubes or flat panels, through which algae is circulated. Both types of production systems can be modified to suit the environment.

Thousands of marine and estuarine microalgal species grow best in seawater rather than freshwater. This would reduce our reliance on fresh water for food production.

Algae have long been recognised for their nutritional properties, forming a vital food source in human diets since as early as 14,000 BC. Over the last few decades, microalgae have been used in vitamin supplements and health food products, including protein bars and powders, green smoothies and Omega-3 capsules.

Microalgae contain proteins, fats, carbohydrates and other nutritional components that have wide potential application in the food industry. For example, algae have a broad array of amino acids that support human growth and development; some are comparable with the levels in egg, soy and wheat protein.

Read more: How hacking photosynthesis could fight deforestation and famine

To date, microalgae have successfully been incorporated into a range of edible products to increase their nutritional value, including yoghurts, biscuits, bread and pasta. Manufacturers have been able to swap plant for algal-protein by simply introducing it as a powder into production streams.

Apart from adding nutrients, microalgae have other properties that facilitate their incorporation into foods, including emulsifying, foaming, gelation, and absorption of fat and water.

Using microalgae in emulsions allows for a decrease in the percentage of oil, showing promise for their potential use in low-fat products. When added to desserts as colouring agents, the cell structure in microalgae protects pigments from thermal degradation during processing, enabling foods to maintain their vibrancy.

Algae can be harvested by sedimentation, flotation or filtration, with not an abattoir or live exporter in sight.

8. It can be used in sustainable products

Microalgae are increasingly being used as sustainable components of other products, including cosmetics, nutraceuticals, industrial enzymes and bioplastics, and as a biofuel to replace fossil fuels in niche markets.

Many microalgae have high levels of palmitic acid. This acid is also the principal component of palm oil – a widely used oil in food production which drives mass deforestation and loss of animal habitat. Replacing palm oil with microalgae would reduce reliance on this unsustainable industry.

9. An opportunity for developing regions

The low-tech, basic infrastructure needed for microalgal farming could provide economic opportunities for developing regions. For example, research has shown a number of African nations have suitable land, labor and climatic conditions to grow microalgae as a source of bioenergy.

Microalgae are being produced commercially in Australia, including at Hutt Lagoon in Western Australia, the world’s largest microalgae production plant. There, the alga Dunaliella salina is grown to produce beta-carotene, a food pigment and source of vitamin A.

Elsewhere in Australia, microalgae is grown to produce Spirulina, which is marketed as a health food. Researchers are developing the use of microalgae further, including as a feed supplement for beef cattle.

But the current range of microalgae products grown in Australia is limited. The nation has a suitable climate and the technology; now it needs growers and manufacturers.

Government support is required to enable the agricultural and manufacturing sectors to create algae-based products – current stimulus spending provides such an opportunity. This would not only create new jobs, but enable Australian businesses to become more resilient into the future.

– ref. More protein and good for the planet: 9 reasons we should be eating microalgae – https://theconversation.com/more-protein-and-good-for-the-planet-9-reasons-we-should-be-eating-microalgae-124591