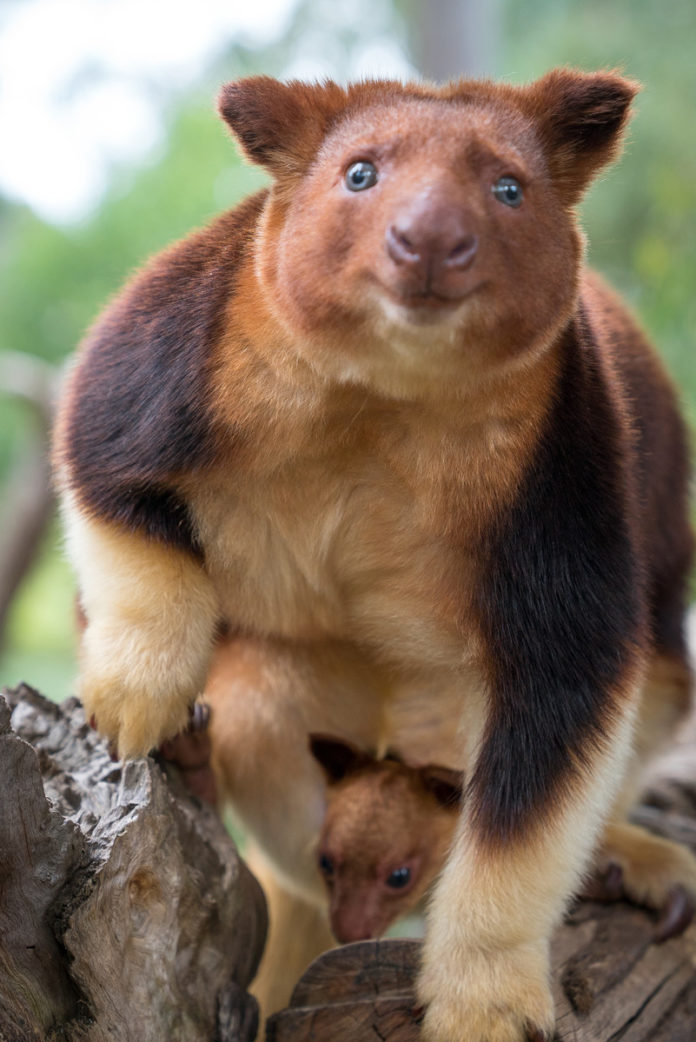 Tree kangaroos are so unusual that when Europeans first encountered them in Australia in 1872, they were sceptical. Who would believe a kangaroo could climb a tree?

But the recent birth of Chimbu – a Goodfellow’s tree kangaroo at Healesville Sanctuary – gives us the chance to watch one of these unique, and very rare, creatures grow up.

Read more: In the remote Cambodian jungles, we made sure rare Siamese crocodiles would have enough food

The Goodfellow’s tree kangaroo is a threatened species found in forests in the Central Cordillera mountain ranges of Papua New Guinea, from sea level to high in the clouds.

Chimbu’s birth in September is the latest success of a complex web of international conservation. Zoos and other organisations around the world transfer and match tree-kangaroos to avoid inbreeding and sustain a genetically healthy captive population.

Europeans in New Guinea first described tree kangaroos in 1828. While there have been plenty of disagreements about who is related to whom, we now know there are 14 distinct species.

Early explorers considered the very idea of a climbing roo ridiculous, but these animals are specially adapted to life in the trees. They likely all evolved from a terrestrial ancestor earlier in the Pliocene, 5.3 million to 2.5 million years ago.

Tree kangaroos have much longer forelimbs than their ground-dwelling cousins and their claws are much larger and strongly curved. This provides much stronger grip when climbing trees and gripping smaller branches.

They still have large strong hind limbs, but their feet are shorter, broader and have a long curved claw on each toe.

The pad of the hindfoot is single, large and with prominent grooves, all of which enhance the animal’s grip when climbing and walking in the canopy. The tails of tree kangaroos aren’t capable of grasping things like a monkey’s, but they’re long and often held out behind the animal for balance.

But perhaps one of the most obvious differences between tree kangaroos and their terrestrial cousins is their adorably small bear-like ears.

Traditionally hunted for food, hassled by dogs and threatened by the destruction of their forest habitat, the soft thud of tree roo feet among the trees is falling silent.

But conservation work in their natural habitat and through a globally managed tree kangaroo captive breeding program is helping not only the species, but the people who live alongside them.

Chimbu was born in Victoria, but is really an international fellow. His mother Mani came from the National Zoo and Aquarium in Canberra, and his father Bagam arriving from Kreffeld Zoo in Germany.

Mani and Bagam were paired based on the recommendation of scientists and managers who maintain a studbook of Goodfellow’s tree kangaroos around the world.

These gorgeous animals are generally chocolate brown on the back, shading to pale brown or cream on the face and belly, and often with a single or double narrow pale stripe down the back.

Their beautiful striped tails are one of their most noticeable features. And while the current population size is unknown, this tree kangaroo is thought to be declining due to hunting for food, local trading for cultural purposes, and habitat destruction through local deforestation and shifting cultivation.

Managing tree kangaroos around the globe

The captive population of Goodfellow’s tree kangaroos in our region is coordinated by the Australasian Zoos and Aquarium Association.

The plan is to maintain long-term healthy populations that are genetically diverse, stable and show natural behaviours to ensure the animals are thriving in their zoo homes.

In turn, the regional program is part of a global species management plan coordinated by the World Association of Zoos and Aquariums.

A key feature of these regional/global management programs is to avoid any inbreeding. Detailed histories of all animals in the population are closely managed, and suitable breeding pairs are identified by specialist zoo keepers called “Studbook Keepers”.

This is why Chimbu was born from a long-distance romance and travel by his parents.

Your cuppa can help

Supporting wildlife conservation in the wild and with local communities is the driving force for zoos globally.

Although the Goodfellow’s tree kangaroos are officially endangered, we don’t know much about them in the wild. Right now, the Wildlife Conservation Society is working out how many are in the wild and where, so scientists can develop a detailed conservation program.

Read more: Yes, kangaroos are endangered – but not the species you think

Income from coffee sales generates much greater access to healthcare and education, major hurdles in these remote villages. Money from sale of the coffee beans is the only regular income into these villages.

So if you do decide to visit Chimbu at the Healesville Sanctuary (in person or virtually) remember you can also buy some coffee to help his wild cousins.

This article is co-authored by Chris Banks, Manager International Conservation, Zoos Victoria, who has worked with tree kangaroo and community conservation for over 20 years

– ref. Meet Chimbu, the blue-eyed, bear-eared tree kangaroo. Your cuppa can help save his species – https://theconversation.com/meet-chimbu-the-blue-eyed-bear-eared-tree-kangaroo-your-cuppa-can-help-save-his-species-135033