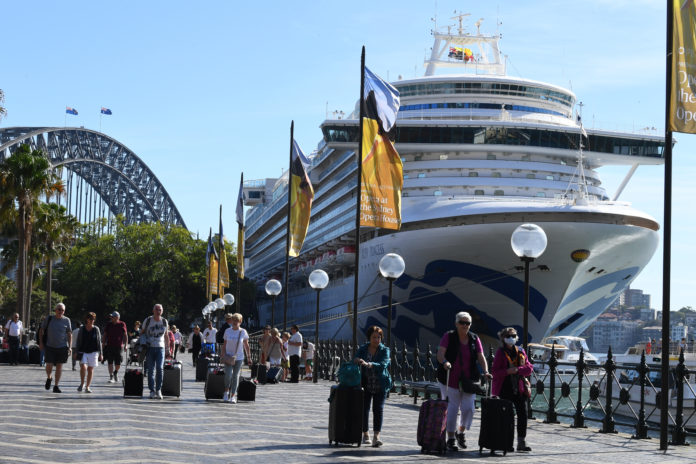 There are now nearly 300 cases of COVID-19 linked to passengers who disembarked from the Ruby Princess cruise ship without any health checks from authorities.

Amid public condemnation, video of travellers squashed together in the immigration queue at Sydney airport made the rounds last week on social media.

Border security at both airports and cruise terminals primarily falls under the purview of the Australian Border Force (ABF). Both episodes have raised critical questions about the management of our border security and who exactly is responsible for what during the coronavirus crisis.

Overlapping responsibilities at the border

The first thing to talk about here is Australia’s federal system and the “national cabinet” of Commonwealth, state and territory leaders that has been set up to respond to coronavirus.

One of the reasons for this approach is that certain roles were ceded to the national government at federation, including border control. But it’s not that simple – there are actually various agencies in charge of different facets of border control.

The ABF, which sits within Home Affairs, is the lead agency responsible for overseeing the movement of people and goods across Australia’s international borders.

Biosecurity Australia, in the Department of Agriculture, works with ABF to protect Australia from any form of disease, including those brought in by humans. And the states are responsible for health delivery, which means anyone identified at the border with health concerns is transferred to the local health authority.

This partly explains why there was confusion over who was responsible for the Ruby Princess passengers. The inability of these three agencies to coordinate effectively at the time showed a gap in existing arrangements.

Australia has had to adopt a risk-management approach to border security, given the range of threats the country faces (narcotics, biosecurity, organised crime), as well as the large volume of movements across the border (more than 44.7 million people per year and 53 million air cargo consignments).

And the numbers of travellers and imports crossing the border are increasing at double-figure rates. As Michael Outram, ABF commissioner, said at Senate Estimates recently,

Such enduring increases in volume necessitate a range of responses that improve efficiency and optimise the impact of our finite resources.

The ABF uses a framework of pre-arrival, arrival and post-arrival assessments and controls to identify, prevent and respond to threats.

On the front end, this means working closely with other countries and organisations to identify areas of risk – narcotics-producing countries, for example – and trying to prevent these threats from getting to Australia in the first place. As such, only a small number of specialised border officials are required at the “primary line” of airport terminals.

Read more: In the war against coronavirus, we need the military to play a much bigger role

Health threats are also risk-managed. As such, global pandemics have been part of the normal forecasting and response mechanisms used by ABF and its partners in the past. They developed action plans, for instance, after the SARS, MERS and Ebola epidemics.

This system relies on early identification and effective containment of a disease, along with other factors, such as how early symptoms appear, how contagious and lethal a disease is and whether vaccines are available.

In the case of SARS and MERS, for example, the diseases had limited spread, early onset of symptoms and relatively low transmission rates, even though initial information was limited and problematic.

However, the enormity and spread of COVID-19 is unparalleled in the modern era, requiring a rapid rethink of our strategies.

It was only two months ago that Chinese and WHO officials declared the virus could be transmitted between humans. Only 218 cases were officially confirmed in China at the time.

Research suggests that actual cases were already in the thousands. And international travel was continuing as usual, with around 2,000 people flying from Wuhan (the epicentre of the virus) to Sydney in the previous month.

Why cruise ships are usually so low risk

Where do cruise ships fit into this? Like airlines, cruise liners are required to check the health of passengers and inform the ABF of any illnesses before arriving in Australia.

They are then given permission to dock and for passengers to disembark with minimal physical checks at the terminal. This permission is known as “pratique”. It essentially means that risks are managed before arrival.

These arrangements, together with the profile of passengers from countries without major health issues and the medical resources available onboard ships, mean that cruises previously presented an extremely low health risk.

And like border authorities, cruise lines have had a limited understanding of coronavirus until very recently.

While all this activity is happening behind the scenes, Australia has also been streamlining the immigration process for travellers. The SmartGates, for instance, whisk more than 27.5 million air travellers through immigration in a matter of seconds annually.

All of this means a better passenger experience and use of taxpayer resources. But COVID-19 has challenged the systems we have in place and shown there’s still a need to be able to adapt quickly and reimpose physical barriers and other controls when necessary.

What lessons can ABF learn?

After the mistakes and creative responses of recent days, the ABF and its parent organisation, Home Affairs, should now be poring over these lessons and others to see how they can improve their operations.

In the case of the Ruby Princess, federal and state authorities identified the problem and adapted quickly, as seen by the revised arrangements for the reception of cruise ships in Western Australia. Border and health authorities are now working together to ensure stringent health checks for passengers and crew.

And state health officials and the ABF have worked out new arrangements for air arrivals, including an order that nurses and biosecurity staff give temperature checks for all incoming passengers and enforcing a 14-day quarantine in hotels.

The roles of varying agencies is also becoming clearer. In NSW, the state police have taken control of the quarantining of returning overseas passengers. Managing social distancing and imposing other physical measures in the terminals, meanwhile, should now be an integral part of ongoing training of border officials and airport staff.

Another key lesson: there is now a special place in the risk matrix for health issues like coronavirus that may be rare in frequency, but have extremely damaging consequences. From now on, health checks and mandatory quarantines should be put in place much more quickly.

Read more: Yes, Peter Dutton has a lot of power, but a strong Home Affairs is actually a good thing for Australia

These are practical matters that agencies can learn from and adjust as required. But perhaps the greater challenge is one that’s less obvious.

A modern border management system relies significantly on the international system of rules, regulations and data sharing. In a world of increasing competition between the major powers and the rise of misinformation, it is more difficult to vet the quality of information being shared and rely on international partners to collaborate.

COVID-19 has presented a strategic shock to Australia’s border operations. The good news is we are now seeing better collaboration and extraordinary adaptation among the agencies in charge of border security. A willingness to engage, cooperate and learn quickly from mistakes is what is needed right now – and to be sure we are ready for the next challenge.

– ref. Coronavirus has seriously tested our border security. Have we learned from our mistakes? – https://theconversation.com/coronavirus-has-seriously-tested-our-border-security-have-we-learned-from-our-mistakes-134794

If border restrictions increase to combat new COVID-19 strains, what rights do returning New Zealanders have?