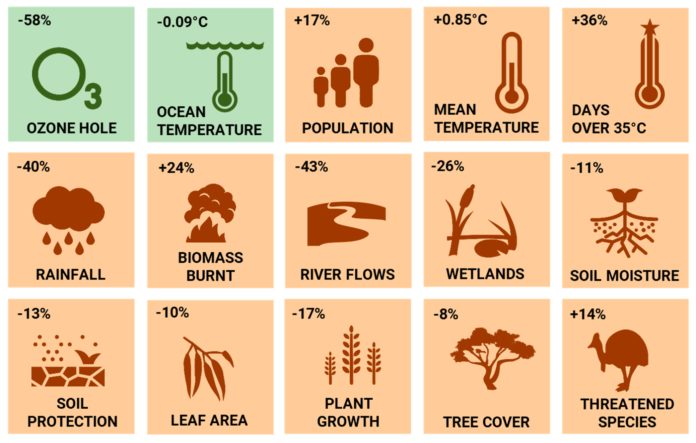 2019 was the year Australians confronted the fact that a healthy environment is more than just a pretty waterfall in a national park; a nice extra we can do without. We do not survive without air to breathe, water to drink, soil to grow food and weather we can cope with.

Every year, we collate a vast number of measurements on the state of our environment: weather, oceans, fire, water, soils, vegetation, population pressure, and biodiversity. The data is collected in many different ways: by satellites, field stations, surveys and so on.

We process this data into several indicators of environmental health at both national and regional levels.

The report for 2019, released today, makes for grim reading. It reveals the worst environmental conditions in many decades, perhaps centuries, and confirms the devastating damage global warming and mismanagement are wreaking on our natural resources.

Immediate action is needed to put Australia’s environment on a course to recovery.

Environment scores in the red

From the long list of environmental indicators we report on, we use seven to calculate an Environmental Condition Score (ECS) for each region, as well as nationally.

These seven indicators – high temperatures, river flows, wetlands, soil health, vegetation condition, growth conditions and tree cover – are chosen because they allow a comparison against previous years. In Australia’s dry environment, they tend to move up and down together, which gives the score more robustness. See the interactive graphic below to find the score for your region.

Nationally, Australia’s environmental condition score fell by 2.3 points in 2019, to a very low 0.8 out of ten. This is the lowest score since at least 2000 – the start of the period for which we have detailed data.

Condition scores declined in every state and territory. The worst conditions were seen in the Northern Territory (0.2 points), New South Wales (0.3 points) and Western Australia (0.4 points), with the latter also recording the greatest decline from the previous year (-5.7 points).

What is most striking is that almost the entire nation suffered terrible environmental conditions in 2019. In each case, the changes can be traced back to dry, hot conditions. Only parts of Queensland escaped the drought.

Comparing local government areas, the worst conditions occurred in Armidale and Gwydir in northern NSW. In contrast, Winton and Townsville in Queensland escaped the overall poor conditions, thanks to the beneficial impact of high rainfall early in the year – although those same events also caused floods killing around 600,000 livestock.

So what exactly happened in Australia in 2019 to cause such widespread environmental damage? There were several causes.

Across most of Australia, the environment was already reeling from poor conditions in 2018. Also, cool temperatures in the Indian Ocean delayed the onset of the monsoon in northern Australia and reduced the flow of moisture to the rest of the continent, creating hot and dry conditions. Average rainfall was a mere 229 mm across the continent, the lowest in more than 119 years and probably longer than that.

The heat was also extraordinary. The average number of days above 35°C across the country was 36% more than the average for the 19 years prior.

In eastern Australia, arid and hot conditions pushed farmers and ecosystems deeper into drought. In many regions, dryness and declining protection from wind erosion created the worst soil conditions in at least 20 years. Consequences included several dust storms and widespread dieback of forests, especially in NSW.

The severe drought also affected inland water systems, especially the Darling River and its tributaries. Town water supply reservoirs ran out of water, the rivers stopped flowing, and the heat turned the remaining pools into death traps for fish.

Of course, 2019 will be remembered as the year of unprecedented bushfires. Nationally, the total area burnt was not unusual, not even when the fires of early 2020 are included. But this is only because fire activity was much below average in northern Australia, where ongoing dry conditions left little vegetation to burn.

The extent of forest fires last year was unprecedented, however. As predicted well in advance, the tinder-dry forests in eastern Australia provided the fuel for a dramatic fire season that started in September. Between then and the first month of 2020, vast areas of forest in New South Wales, eastern Victoria, Kangaroo Island and the Australian Capital Territory went up in flames.

Read more: Yes, the Australian bush is recovering from bushfires – but it may never be the same

The ecological damage was also profound. Fires raged through ecosystems poorly adapted to fire, from rainforests in tropical Queensland to alpine vegetation in Tasmania and the Snowy Mountains of NSW. It remains to be seen whether they can recover. Across NSW, 35% of rainforests were turned to cinders.

About 191 species of animals and plants saw more than one-third of their living area burnt, among them 52 species that were already threatened. Thankfully, the last remaining stands of the prehistoric Wollemi pine and the rare Nightcap Oak were saved.

Even before the fires, 40 plant and animal species were added to the threatened list in 2019, bringing the total to 1890. Following the fires, more species are likely to be added in 2020.

We’re not doomed yet

Last year was neither an outlier nor the “new normal” – it will get worse.

Greenhouse gas concentrations continued to increase rapidly in 2019, causing the temperature of the atmosphere and oceans to soar. Australia’s population also continued to grow quickly and with it, greenhouse gases emissions and other pollution, and our demand for land to build, mine and farm on.

Whether we want to hear it or not, last year represented another step towards an ever-more dismal future, unless we take serious action.

Read more: Here’s what the coronavirus pandemic can teach us about tackling climate change

The current coronavirus pandemic shows that as individuals, and collectively, we can take dramatic action once we acknowledge the urgency of a threat. By comparison, addressing environmental decline will cost less, whereas the long-term costs of not acting will be far greater.

There is much we can do. In the short term, we can help our natural ecosystems recover from the drought and fires. Government agencies and land owners can cull and manage invasive species in fire-affected areas – from weeds, to foxes, cats and feral horses – and stop damaging logging in fire-affected areas.

Individuals can do their bit. We can donate money or time to organisations committed to helping ecosystems recover. Record what you see on bushwalks to help environmental managers monitor and assist ecological recovery.

But the damage of climate change is not limited to natural environments. We must get serious about curbing greenhouse emissions. Humanity has the tools, technology and ingenuity to do it and Australia, one of the countries worst affected by climate change, should lead the world.

Beyond that, individuals can also make a contribution: recycle and reuse rather than buy new, choose low-emission and renewable energy technology and reduce waste – it can save money even now. Let governments and politicians hear your voice. Try to convince friends and family that things need to change.

In the long term, we must find a more balanced relationship with the natural world, understanding that our own survival will depend on it.

The full report and webinar are available here.

Read more: Lots of people want to help nature after the bushfires – we must seize the moment

– ref. A major scorecard gives the health of Australia’s environment less than 1 out of 10 – https://theconversation.com/a-major-scorecard-gives-the-health-of-australias-environment-less-than-1-out-of-10-133444

Keith Rankin Analysis – The 2020 New Zealand Election is Not...