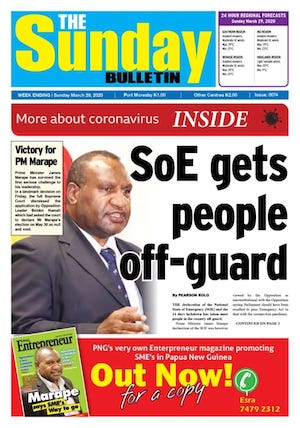 Papua New Guinea will have only one press release in the afternoons at 4:00pm daily to give updates on the Covid–19 in the country in a reshuffle of information briefings.

Nurses in Port Moresby came together this week to protest against the national government over lack of personal protection equipment (PPE) to combat the Covid–19 coronavirus pandemic.

“Starting today [Friday] media statements and updates will come from me as the minister responsible, or the Prime Minister, James Marape, and if we are not there it will be the Controller, who is the Police Commissioner David Manning,” Wong said.

“We have already contained the Police Minister Bryan Kramer. He is not a doctor, he is not a nurse…he just picks up information from certain people and pushes it out and this is where he causes mass panic and irritation among the medical fraternity,” claimed the minister.

The Sunday Bulletin confirmed that many citizens had panicked since the national government declaring the state of emergency due to the outbreak of the Covid–19 pandemic in Wuhan, China, which quickly spread across the globe infecting many thousands with death rates rising sharply.

There was no clear information and instructions disseminated to the population of the country, although the only foreigner who tested positive after arriving in the country, an Australian mineworker, had already been airlifted to his origin.

Confusing information
Although no PNG citizen has contracted the deadly virus as yet, information on the Covid–19 since day one had been confusing.

Also the health minister’s absence in many media conferences with the police minister “taking over the show” has led to many drawing conclusions about who is telling the truth.

Wong said he had much respect for the nurses and he would do everything possible under his leadership to make sure priority was given to health workers.

The Prime Minister has asked the nurses to return to work and them that throughout the country PPE would be made available in the hospitals in the coming weeks.

The nurses were also assured that the government under his leadership would make sure all grievances raised by the nurses would be addressed including the issue on the insurance cover for all workers in the country.

Pacific Media Watch reports that Police Minister Bryan Kramer usually provides clarity on government policy with clear and concise information on PNG developments in both his public statements and on his Facebook page  Kramer Report.

Pacific Media Watch correspondent Bob Howarth described Kramer this weekend as “overshadowing” both the Prime Minister and Minister Wong with not only his frankness, but also for “chastised local reporters for not self-distancing 1.5 metres” and “repeating questions viewers couldn’t hear”.

Correspondents on The Sunday Bulletin page also leapt to Kramer’s defence, saying it was not him that was creating “confusion”.

Paul Barker, executive director the PNG Institute of National Affairs, wrote: “It’s not Kramer that provides confusion and lack of clarity, in fact, quite the opposite from what we hear.”

Thomas Opa, a real estate business director, wrote: “The fact is that [Prime Minister Marape] wants Kramer to speak on behalf of the government because there is clarity, no ambiguity and everyone understands Kramer. He is articulate.

“We may not like him but let’s accept the fact that Kramer is a good communicator. He is what [is] needed by the government to ensure the government message is heard loud and clear to put confidence in our people that the government is in control.”

Simon Eroro is a reporter for The Sunday Bulletin.