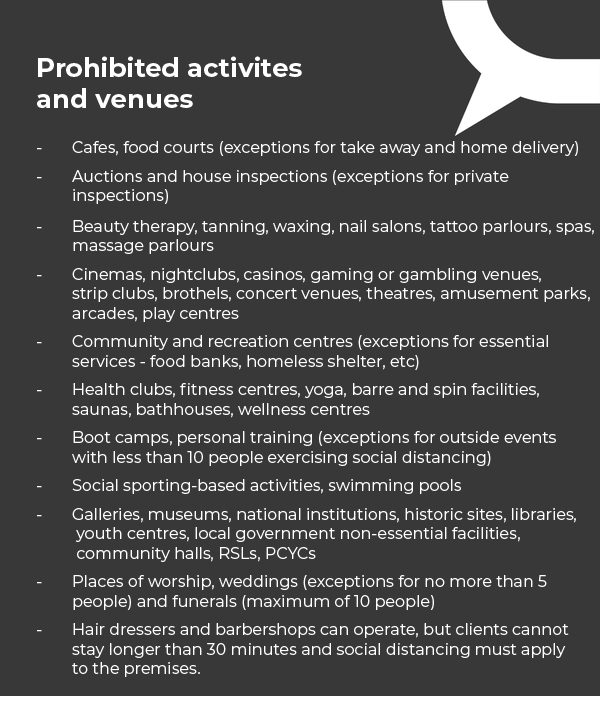 Only five people will be able to attend a wedding – the couple, the celebrant and two witnesses – and funerals will be restricted to 10 in the latest round of life-changing restrictions to be imposed on Australians to fight the coronavirus’s spread.

Real estate auctions and “open house” inspections will be stopped, and Australians will now be prohibited from leaving the country, rather than just strongly advised not to do so.

Scott Morrison, announcing the new crackdowns, also told people to stay home, except when it was absolutely necessary to go out. But they shouldn’t have the extended family around the dinner table or to a barbecue.

However he is still advising people to send their children to school, and on Wednesday will meet teachers’ union representatives to discuss arrangements to protect staff, especially older teachers more vulnerable to the virus. Schools would need to reopen on the other side of the holidays, he said.

Addressing a news conference after Tuesday night’s federal-state national cabinet, Morrison said the widened list of bans would include food courts in shopping centres, except for takeaways. Outdoor and indoor markets – excluding food markets essential to ensure the food supply across the country – will be a decision for each state and territory.

A range of personal services, including beauty therapy, tanning, waxing, nail salons and tattoo parlors, will be shut down, as well as spas and massage parlours. This does not extend to physiotherapists and similar allied health services.

Hairdressers and barbers have escaped closure, but with a social distancing limit to the number of people on their premises, and the stipulation a patron can only be there for 30 minutes.

Boot camps may be held outside with no more than 10 people.

Morrison said people should “stay at home unless it is absolutely necessary you go out.

“Going out for the basics, going out for exercise, perhaps with your partner or family members, provided it’s a small group – that’s fine.” As was going out to work, where it was not possible to work from home – but not “participating more broadly in the community”.

Visits to your house “should be kept to a minimum and with very small numbers of guests.

“So that means barbecues of lots of friends, or even family, extended family, coming together to celebrate one-year-old birthday parties and all those sorts of things, we can’t do those things now.

“These will be a significant sacrifice, I know.

“Gathering together in that way. even around the large family table in the family home when all the siblings get together and bring the kids, these are not things we can do now. All of these things present risks”.

He said states and territories were considering whether they would make it an offence to organise house parties.

Read more: View from The Hill: Entertainment venues closed in draconian measures to fight the virus

“Outdoors, do not congregate together in groups.

“If you’re gathering together in a group, say, 10 people, together outside in a group, that’s not OK. We’ve got to move people on.”

Morrison said the “hopefully” a full shutdown of the retail sector would not be necessary,

“I do note in a lot of the commentary … there seems to be a great wish to go to that point. Well, be careful what you wish for on something like that. … Because that would need to be sustained for a very long time. And that could have a very significant and even more onerous impact on life in Australia.

“We should seek to try to avoid that where it is possible. But if it is necessary for health reasons, ultimately, those decisions will be taken at the time”.

Asked about why an outside boot camp of ten people was allowed, Morrison said “that is a business, that is someone’s livelihood and you are saying that I should turn their livelihood off. I’m not going to do that lightly. If it is not believed to be necessary based on the medical expert advice.

“I am not going to be cavalier about people’s jobs and their businesses. Where possible the national cabinet together is going to try and keep Australia functioning in a way that continues to support jobs and activity in our economy which is not going to compromise the health advice that we’re receiving.

“You could rush to causing great and unnecessary harm because understand this, this country is not dealing with one crisis, we’re dealing with two crises. We are dealing with a health crisis that has caused an economic crisis.

“I am very concerned about the economic crisis that could also take a great toll on people’s lives, not just their livelihoods. The stresses that that will put on families. The things that can happen when families are under stress.

“I am as concerned about those outcomes as I am about the health outcomes of managing the outbreak of the coronavirus and it is a delicate task for the national cabinet to balance those two.

“Lives are at risk in both cases. And so the national cabinet won’t just rush on the sense of an opinion of inevitability. We will calmly consider the medical advice that is put to us and weigh those things up and make sensible decisions as leaders. I will not be cavalier about it and neither will other premiers and chief ministers.”

He apologised for the systems failure that prevented people accessing Centrelink, prompting huge queues with many people who had lost jobs visibly upset.

He appealed to people “even in these most difficult of circumstances to be patient. Everyone is doing their best. What we are dealing with an unprecedented. No system is built to deal with the circumstance and events we are facing as a nation.”.

The Chief Medical Officer, Brendan Murphy, said the steep growth in the number of cases – the tally is now passed 2000 – was “very concerning”.

Nine reported a panel of experts from the Group of Eight universities commissioned by the federal government had recommended that “Australia without delay implement stronger national social distancing measures, more extensive banning of mass gatherings, school closure or class dismissal”.

The group, in advice presented on March 22, also urged “much-enhanced” testing without delay.

It said: “Countries with significant COVID-19 infections have eventually been forced into strong public health measures in a reactive manner. It became unavoidable from a public health perspective.

“Proactive measures will result in a smaller epidemic and less stress on the health system. Reactive measures (such as in Italy) may result in a greater burden of morbidity and mortality and delay in reaching the point of recovery.

“The only difference is at what point these measures are implemented, whether proactive or reactive, and how large the resulting epidemic will be.”

The “dominant” position in the group was for “a comprehensive, simultaneous ban across Australia”, but the other view among its participants was for a “more proportionate response”.

With the government going down the latter path, Morrison and Murphy were noticeably uncomfortable when questioned about the advice.

Former prime minister Tony Abbott, who as health minister in 2004 drove preparations for a possible bird flu pandemic, called for a total shutdown.

“We need to have a very, very complete shutdown now to do everything we humanly can to prevent the spread of the disease, he told 2GB.

“You can only put the economy into a coma for so long, it can’t be indefinite,” he said.

“But the more complete it is now the more likely it is to be short-lived.”

– ref. In the age of coronavirus, only tiny weddings are allowed and the extended family BBQ is out – https://theconversation.com/in-the-age-of-coronavirus-only-tiny-weddings-are-allowed-and-the-extended-family-bbq-is-out-134584