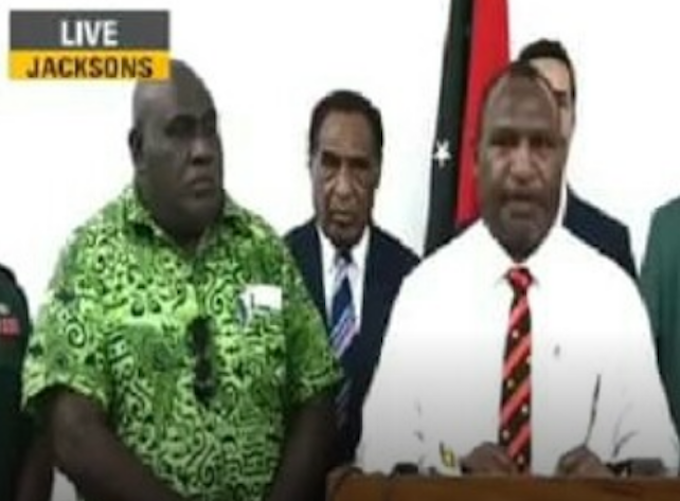 In what is arguably the most anticipated media conference since the announcement of his new cabinet in early 2019, Prime Minister James Marape appeared to dodge the question burning on a restless nation’s lips – Do we have the first case of Covid-19?

He’d stepped off the Falcon jet after a trip to Kokopo, to an already eager audience awaiting him. That was at 6pm local.

An hour and a briefing later, he was ready to face the media. Members of his cabinet, as well as the hierarchy of the police, defence and technical assistance from the Health Department by his side, Marape began:

“There is now a case established in Lae. A few days ago there was a report that emanated from a test that was done by the PNG Institute of Medical Research that did indicate the possibility of a person infected.

“To confirm further, we’ve run two tests, one test proved negative, but that wasn’t conclusive, but the second test proved positive. So we are now all awaited that candidate that we’ve confirmed as a person that is a suspect case.

“He belongs to about 19 or so persons of interest that [have] come into our country since Covid-19 was first established.”

Credit to systems
Marape gave credit to the systems set in place since the outbreak of the global pandemic. A system which, in a wider sense has so far been successful despite the obvious challenges faced by Papua New Guinea.

“Since January, there were over 5000 or so travellers who’ve come into our country, our own observation or contact points and system checks at Jackson’s Airport as well as our four designated ports have been managing them, keeping track of them ….

“We’ve been able to contain down to the 19 persons of interest, and of those 19, one now has come out, and this in my view has given me a little bit of satisfaction in the fact that our own system, despite the inadequacies that we have in our system… are able to trace those persons of interest and this one person in Morobe.”

Papua New Guineans would have felt both relief and anxiety in that initial opening statement. For weeks, there had been numerous calls for action.

He’d had two actually. The first, probable. The second negative.

And while the gravity of the situation certainly would have played on the prime minister’s mind, he appeared cordial at times, and flippant in his discourse to the media present.

‘We mustn’t panic’
On more than one occasion repetitive: “This in my view is giving us an opportunity to have one case in which it could make our government assess for further cases if it does happen. So we announce to the country that we mustn’t panic, in as much as we can we have systems in place to monitor those who are persons of interest.”

Positive words from the prime minister, sadly, in stark contrast to global events. Italy has announced another 627 deaths overnight taking its death toll to at least 4032.

More than 47,000 cases of the virus have now been reported in the country. More people have now died after contracting the coronavirus in Italy then in China were when the outbreak begun.

All that in a nation with one of the best health infrastructures in Europe.

Reports from Lae City yesterday was that a stakeholders’ meeting was being held between the health authorities, business houses, customs and police on plans to contain Covid-19 in Lae and Morobe.

A submission of K5 million was made to the Morobe Provincial Government for the operation by the Provincial Covid-19 Response Committee almost two weeks ago and they are still waiting for a response.

That follows a K15 million budget from the Response Team to the National Health Department that has been pending since its submission three weeks ago.

Isolation centre not done
Worse, the promised isolation centre by the government that will be set up at Lae’s Angau General Hospital has also not been done.

The prime minister’s call for calm and composure did little to calm more than 8 million frayed nerves. And the backlash would follow soon after.

As the wave of growing frustration finally erupted. One social commentator saying the prime minister, and health and police minister had prematurely announced a negative result from the case subject in question.

Another stating that given the passenger’s itinerary, quarantine measures could have been instigated in advance. These comments among a handful of positive criticisms.

The word handful being key. There were so few. The majority of followers were far less forgiving in their statements.

And while it was the PM in the spotlight, the target was Health Minister Wong.

Three days ago Wong, released a statement, pleased to announce the probable case returned negative thanking the public for “continuing to work with us” to ensure PNG continued Covid-19 free.

Borders now closed
Earlier yesterday, in a Gazetted release, Minister Wong said Papua New Guinea’s borders were now officially closed, the exceptions being to incoming health workers, people assisting with PNG’s Covid-19 response, diplomats with written authorisation from the Minister for Health, flight crews, and cargo vessel crews (though they may not leave the aircraft or vessel) and military personnel.

Professionally presented, as per the office being held. What hasn’t been appreciated, have been the social media posts.

Leading many to question the integrity of the source.

The Prime Minister’s initial negative result post was an offhand remark taken amid a score of smiling children. The Police Minister Bryan Kramer also doing so.

The Health Minister’s release was made on his Facebook page.

It wasn’t until half an hour later that an actual “official” document was presented for the media to disseminate to a worried public.

Crux of the issue
And that’s the crux of the issue. That disconnect between available information, and its presentation to the masses. Verified. Correct. And without need for interpretation.

Tonight saw all three in the centre of the screen, as it was broadcast live……. All over the world.

Surprisingly, Wong stood in the background. Alongside him, Kramer, who of all MPs in Parliament has been the most social media savvy (taking nothing away from certain Instagrammers.)

In any case, the body language, strategic positioning of MPs around Prime Minister Marape didn’t give off the confident reassurance the nation needed.

The provinces, however, have stepped up their own protective mechanisms.

East New Britain was the first province to feel the impact of the coronavirus threat, albeit economically. Early this month the province was facing a crumbling tourism industry following the refusal to allow the Queen Elizabeth II cruise ship to visit due to the threat of the coronavirus.

A ban was put in place by the ENB Provincial Authority.

The border provinces with Indonesia, West and East Sepik, have united to provide resources to protect communities against the Covid-19.

Chairman of the Inter-agency Working Committee, Timothy Teklan, said the risk was high and he has called on the national government to declare a state of emergency along the PNG-Indonesian border.

Political leaders of West Sepik have committed K500,000 towards awareness, containment, recovery and other necessary plans to protect communities.

In Manus, the province plans restrictions on people travelling in and out. The travel restrictions will be imposed on both foreigners and nationals.

Madang Governor Peter Yama said he was prepared to stop all foreign vessels and international visitors from entering the province.

His assessment, a blunt: “We don’t have any contingency plan…there’s nothing in place, there is no money and no appropriation for such money like this in here for that purpose…if coronavirus breaks out in Madang province – my people will die like flies. And that’s my fear.”

Isolation facilities have been set up at the Port Moresby General Hospital and Taurama Military Clinic.

And three days ago the Papua New Guinea Defence Force was put on alert as the health minister formally declared the Covid-19 as a “quarantinable disease” under the country’s health laws.

One thing is for sure, Covid-19, is a litmus test for the government. Already its communication strategy has left a lot to be desired.

In fact, what led to the anticipation of last night’s statement by the prime minister, was a “leaked” National Department of Health release, showing the official government crest with the words “…Confirming our first Covid-19 case.”

Maddeningly, almost immediately after the prime minister’s short address, the PNG IMR, established as fact, what was coyly stated: PNG has its first positive case of Covid-19.

If in the past the government has been accused of failing in providing proper infrastructure, in light of this worldwide crise, they are now failing at what Papua New Guineans are traditionally good at – communication.