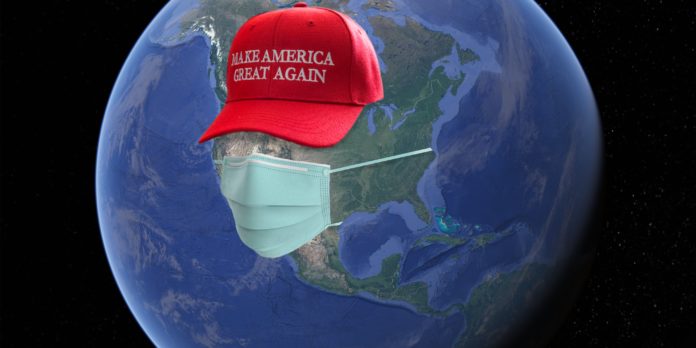 When the Federal Reserve cut interest rates to the bone this week, this represented the most decisive action taken so far to forestall recession caused by a global health crisis.

The US central bank’s dramatic intervention is an acknowledgement that a health pandemic risks the most severe downturn in the global economy since the Global Financial Crisis of 2008-09.

But the question should be asked: why it is being left to the Fed to do the heavy lifting in response to a global health emergency that risks morphing into an economic crisis?

What sort of leadership is the White House providing globally?

Why, indeed, has the US president not convened a meeting of G20 leaders, or officials, to coordinate a global response to the pandemic itself and to risks of a severe economic retrenchment?

Read more: Will coronavirus damage Trump in the US general election? And Morrison’s ratings improve in Newspoll

The short answer is that American leadership has been conflicted.

President Donald Trump’s initial response to the emergence of the COVID-19 contagion in China was to play down its likely effects.

At one point Trump referred to reports of an emerging pandemic as a “hoax” designed to harm his presidency.

His media allies attacked those who sought to raise the alarm.

Valuable time has been squandered in forging a global response to a global health emergency and now economic crisis-in-the-making.

Winston Churchill has had attributed to him what may be an apocryphal quote. This is that America always does the right thing once it has exhausted other possibilities.

In the age of Trump, it would take a leap of faith to assume American leadership will provide the sort of guidance the world has come to expect, even take for granted.

America may, as Churchill observed, step up, but precious time has been lost.

Various world leaders, including Australia’s Scott Morrison, have begun calling for an emergency G20 session to respond to the risks of a much more severe slowdown than had seemed likely as recently as late February.

At a G20 gathering in Riyadh, finance ministers and heads of central banks resolved to monitor risks to the global economy.

Surprisingly, these officials did not come forward with a plan beyond an agreement to take “further action” if global growth slowed more sharply than the International Monetary Fund anticipated.

In a presentation, the IMF predicted the pandemic would shave a modest 0.1% off global growth. Growth would pick up in the latter half of the year and into 2021.

Depending on the longevity of the COVID-19 crisis, that expectation now appears far-fetched and even laughable. China’s growth has been revised down sharply in the latest IMF assessments.

In view of what has transpired in the three weeks since the Riyadh meeting it is clear the IMF significantly understated the economic consequences of a mushrooming health emergency.

Riyadh participants, who included US Treasury Steven Mnuchin, would certainly not have anticipated the sort of dramatic action taken overnight by the Federal Reserve.

Nor would they have expected the speed with which coronavirus has spread across the globe.

The Fed reduced its benchmark interest rate to a range of 0-0.25%. This is effectively a zero rate of interest, trending towards negative interest rates. This is not a vote of confidence in the durability of the American economy, or in the resilience of the global system.

The central bank’s loosening of the spigots in the purchases of billions of dollars of Treasury securities and mortgage-backed debt – so-called quantitative easing – is designed to throw a lifeline to a sputtering economy.

The last thing America needs is another mortgage-backed securities meltdown. This is what brought on the GFC.

None of this reflects a great deal of confidence in the ability of the American and global economies to withstand the twin shocks of a health emergency and a global economy made vulnerable by an overdependence on Chinese growth.

As a growth engine, China had been pumping up global growth, but the air is going out of those tyres. Irrespective of how long the COVID-19 crisis lasts, we will enter a new phase in which Chinese growth will be tempered.

In the meantime, the world finds itself at its most precarious moment since the GFC. The health emergency might be brought under control without lasting damage to the global economy. Global growth might be restored to an extent.

However, what remains in question is whether an American administration led by an avowed populist who has eschewed a global leadership role will become the champion of a much-needed multilateral response to a health and economic crisis.

When the GFC hit, America stepped up. Then Treasury Secretary Henry Paulsen guided an American response. The G20 played its part.

Lack of confidence in American leadership is not least of the contributing factors to a global sense of panic. The Federal Reserve has done its best. It might not be enough.

– ref. Lack of confidence in US leadership adds to coronavirus panic – https://theconversation.com/lack-of-confidence-in-us-leadership-adds-to-coronavirus-panic-133760