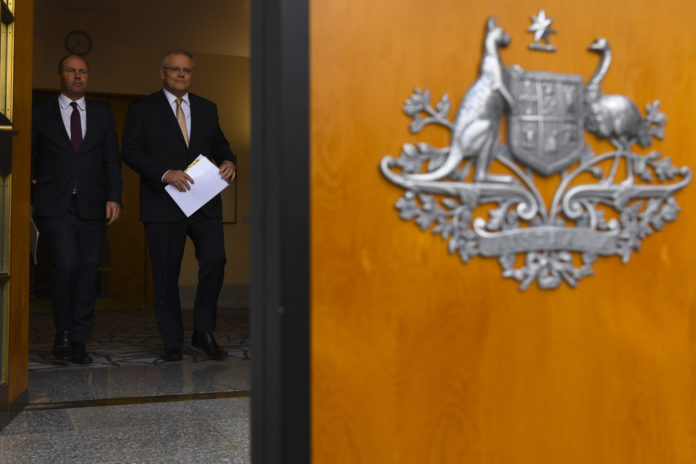 Let’s hope it won’t come to this, but handling the coronavirus might eventually make dealing with the global financial crisis look rather a doddle.

The GFC was devastating – for businesses, individuals and many economies. But it was a financial crisis that drove an economic crisis. When a health crisis is the driver of an economic crisis, the uncertainties are multiplied, and people’s reactions are more difficult to predict.

Will the government’s mega $17.6 billion stimulus package be sufficiently big and well targeted to head off an Australian recession? That was the obvious question when on Thursday Scott Morrison had to eat many of his previous words about Labor’s alleged waywardness in times past and announce his own cash splash for individuals and businesses.

It’s easy to ask but no one can be confident about the answer.

The spending has been carefully pitched to try to stop the economy tanking via a negative June quarter (the general assumption is the March one is down the gurgler). Some $11 billion will go out the door by June 30, and it is estimated the measures will add 1.5% to growth in the June quarter. The rub is, no one knows how much the virus will take off growth in that quarter.

One pressing uncertainty is whether there’ll be a shutdown of major events. So far, the medical advice has been that mass gatherings should not be abandoned.

Scott Morrison told reporters he was looking forward to attending the football this weekend. But many organisations are cancelling smaller events, ranging from the school fete to the business conference. Government House in Canberra has pulled its weekend open day.

There’s an increasing prospect large gatherings will have to be stopped, something primarily in state governments’ hands.

Former Labor leader Bill Shorten on Thursday suggested this should come sooner rather than later. “This is going to be a major policy question, not in weeks and months, but in days. Do we keep having big events? Will we teach school from home?” he said on Sky.

“But we’ve got to have more social distancing. And that is the only way to stop this pandemic being worse than it might otherwise be,” he said.

A pattern is emerging overseas. In the United States the National Basketball Association (NBA) has suspended its season after a player tested positive, and many sporting and other activities around the world are being called off.

On Friday morning the Grand Prix, due to be held in Melbourne, was cancelled.

The cancelling of events, whether after official decrees or by the actions of individual organisations, will hit the economy hard, but the impact must be near impossible to predict.

In any crisis, confidence is key. In this crisis, people obviously are worried not just about jobs and income but also about the sickness.

Different segments of the population will vary in their principal concerns. Young people will be more preoccupied with the employment and financial implications, older people with health matters, but there will be much overlap, with many of the young and middle aged fretting about older relatives.

Glitches will be found and priorities disputed but in general the government’s package appears sound. Nearly $12 billion goes to business, largely to small and medium sized enterprises, in an attempt to keep people in jobs. Meanwhile Morrison is putting moral pressure on big businesses to look after their own. Some are responding.

The $4.8 billion for 6.5 million welfare recipients and other lower income people to receive a one-off $750 payment is unashamedly designed to boost household consumption ASAP. The government can’t wait to get the money out – it will be dispatched from the end of this month.

Here, however, more uncertainties emerge. All the economic data and past experiences say giving these people money will see it spent rather than saved. But will things be the same in these extraordinary circumstances?

About half the beneficiaries of this cash are pensioners – people in the coronavirus’ most vulnerable age group. How many of them will be fearful enough about their health prospects to think they should put away some or all of their windfall from the government?

In political terms, there are lessons in the unfolding crisis.

Politicians should remember that old adage of what goes around, comes around. The Coalition in recent years has made a mantra of how the Rudd government spent too much on combatting the impact of the GFC.

There’s an argument that Labor overspent in its second stimulus package, costing $42 billion, and we know it had flaws. But it was better to err on the side of overkill, and now it’s Kevin Rudd and former treasurer Wayne Swan running round finger pointing.

The Morrison government is aware of the danger of doing too little, hence as it crafted the measures it “grew” the package (which compares with Rudd’s $10.4 billion first tranche). And it stresses the plan is “scalable” – an ugly way of promising to do more if necessary. The next opportunity will be in the May budget.

It’s the same with the government’s crowing about the (prospective) surplus while this was still in the budget’s womb. It will be born a deficit.

Politicians never seem to learn it’s best not to get too full of yourself.

On Thursday night Morrison took the rare course of an address to the nation. He wanted to reassure the public. But are people comforted these days by anything a political leader says? In our age of distrust of the political class, probably not much. Perhaps better to put the Chief Medical Officer on.

Commentators have been saying this crisis will make or break Morrison. We can’t be sure about this either.

If the economy goes into a serious recession, that would transform the political landscape, but in what way is another unknown. A recession helped see off the Fraser government. But as treasurer Paul Keating announced “the recession we had to have” at the start of the 1990s and then as prime minister he won an election in 1993.

So a recession wouldn’t necessarily be fatal for the Morrison government. Nor would avoiding one necessarily deliver the Prime Minister the votes of a thankful electorate.

The public were not grateful to Labor for warding off recession. Gratitude isn’t something today’s fractious voters are inclined to hand out. They thought it was Labor’s job to get them through the GFC. If the Coalition prevents a recession Morrison will receive some bouquets, but whether their pleasant scent lingered would depend on a whole lot else.

– ref. Grattan on Friday: Will many people be too worried to spend the cash splashed their way? – https://theconversation.com/grattan-on-friday-will-many-people-be-too-worried-to-spend-the-cash-splashed-their-way-133544