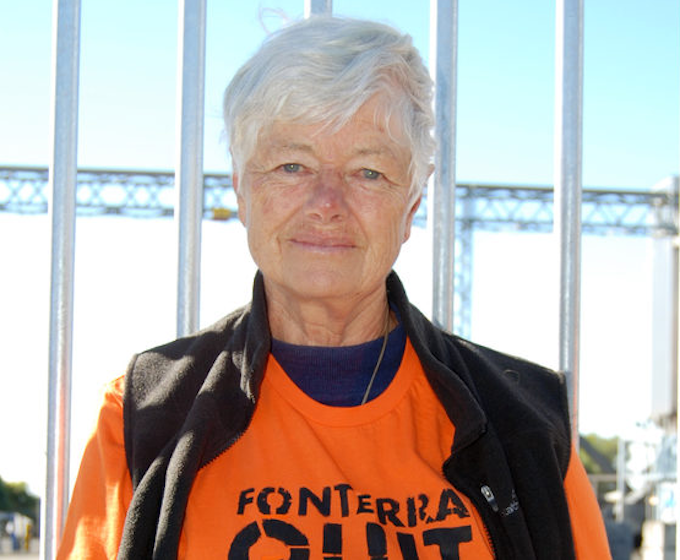 Her husband, Harry Parke, said the death was totally unexpected.

“Yesterday morning she was out on the farm doing stuff, she had a bit of a fall and finally ended up in Thames Hospital where she had a massive stroke and died at 9.45pm last night – very peacefully I might add,” he said.

READ MORE: What the Green Party has achieved in 18 years

“The day before, she was using a chainsaw – that’s the sort of person she is. She worked a lot harder than I ever did. I was totally in awe of her.

“Fortunately we both had very much the same convictions about what needed changing in the planet and we had a very close relationship.”

Fitzsimons became the co-leader of the Green Party of Aotearoa New Zealand in 1995, and when the party joined the Alliance led by Jim Anderton’s New Labour Party, she took on the deputy leadership role.

After the first MMP election in 1996, she entered Parliament as a list MP for the Alliance but it was not long before strains appeared in the grouping.

Left the Alliance
She felt herself left out of its decision-making and the Green Party itself was increasingly unhappy with the Alliance’s direction.

The agreement to send New Zealand troops to Afghanistan in the United States’-led so-called war on terror was a step too far for the Greens and they left the Alliance.

Fitzsimons won the Coromandel seat for the Greens in 1999, the country’s first elected Green MP and was disappointed when she lost it in the following election, although the party remained in Parliament due to its party vote.

She and her co-leader Rod Donald were strong influences in the change in public perception of the party as a group of sandal-wearing tree-huggers.

Parke said Fitzsimmons was “instrumental” in getting the Green Party up and running in the 1990s. More recently, her focus had been on climate change.

“She fought really hard to get people to accept you can’t keep growing the economy and stop climate change. It just seems people don’t want to hear that.”

“She strongly believed that never got you anywhere, that all it did was take the focus off the subject you were talking about and your energy needed to be totally on what you were trying to achieve. I think she held that up admirably,” Parke said.

“She totally lived her convictions and there was no way that anyone could say she didn’t live up to what she was saying.”

Fitzsimons was made a Companion of the New Zealand Order of Merit in 2010.