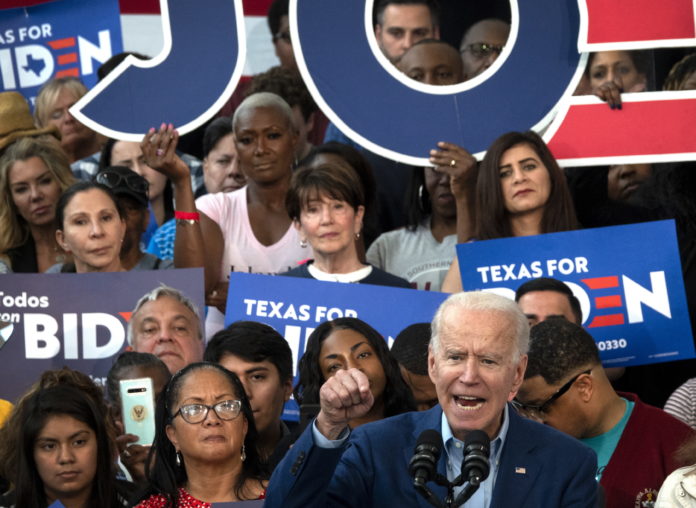 Super Tuesday has continued Joe Biden’s recovery from the brink of disaster.

After a larger-than-expected win in South Carolina, Biden became the clear alternative to Bernie Sanders in the contest to be the Democratic Party’s nominee for the US presidency. Just before Super Tuesday, his moderate rivals, Pete Buttigieg and Amy Klobuchar, dropped out, giving him their endorsements. Just as in South Carolina, the African American vote in southern states proved critical for Biden. He now holds a narrow delegate lead over Sanders.

Sanders held his own on Super Tuesday, especially in California, where he stands to harvest more than 150 delegates. But his campaign will be disappointed that they couldn’t land a knockout blow, especially in Texas where Sanders led in polls but Biden won.

It is now a two-person race, with an advantage to Biden. There have been a lot of crazy, chaotic stories over the past six months. The unlikely rise of South Bend Mayor Pete Buttigieg. The trials of Elizabeth Warren, widely admired but cursed by self-fulfilling prophecies about her electability. The jaw-droppingly expensive, and futile, campaign of Mike Bloomberg. The demoralising fiasco of the Iowa caucuses.

After all that, we’re back to the two men who seemed the most likely contenders before it all began.

So what can we learn from Super Tuesday in 2020?

The power of the black Southern vote

After his shockingly poor results in the Iowa and New Hampshire races, Biden warned that 99.9% of African American voters had not yet had a say in the primaries. This was Biden’s big gamble – that black voters in South Carolina would redeem him.

Biden boasts long-standing connections with African American leaders and the reflected glory of Barack Obama’s presidency when he served as vice president. But as early losses mounted, campaign money dried up and his poll lead shrank in South Carolina, his prospects looked increasingly shaky.

His saviour was the very senior and respected congressman James Clyburn, who gave Biden his endorsement days before the election. A huge 47% of South Carolina voters said Clyburn’s endorsement was important, and Biden won two-thirds of the black vote there.

African American voters powered Biden’s Super Tuesday victories in Virginia, North Carolina, Alabama and, crucially, in Texas. Overall, he won more than 60% of the black vote, which makes up a quarter or more of the Democratic Party electorate (and the majority in some southern states). It is widely believed in the Democratic Party that an energised black electorate is critical to beating Trump and winning house and senate races, and this will draw more support to Biden.

But is it important to remember that African Americans are not politically monolithic. These wins in the South reflect Biden’s strengths with older and more conservative voters. In California he won about a third of the black vote.

Bernie Sanders is winning in western states like California, Nevada and Colorado. This is partly because of the enthusiasm he has generated among working-class Latino voters, who are drawn to his economic message.

Latinos, who are about a third of the Democratic electorate in California, are younger than the rest of the population and will be increasingly important in future Democratic coalitions. Sanders won around half the Latino vote in California and 39% of it in Texas.

The great promise of Sanders is that he can reach young voters who would otherwise avoid politics. His electability against Trump hinges on large increases in youth turnout. So far, those increases haven’t transpired for him in the primaries. It may well be different in a general election, but we’ll never know if it doesn’t happen in the remaining primary races.

Former New York Mayor Michael Bloomberg spent an incredible half-a-billion dollars (A$768 million) on his campaign in the Super Tuesday states, and has little to show for it. He has now exited the race, but his money will stay in. He is likely to play a Clive Palmer role, unable to buy office for himself, but willing to spend hugely to get a candidate and a president who will act in his interests.

Bloomberg, who wasn’t on the first three ballots, left his run too late. He got only two debates, the first of which was a disaster. He had no chance after Biden harnessed the moderate vote with his South Carolina win.

This will be a lesson for any future candidates tempted to wait out the early races. But it is a lesson Bloomberg should already have known. The mayor of New York before him, Rudy Giuliani, also gambled everything on the fourth race of the 2008 primaries. He spent US$59 million to get a single delegate in Florida.

Whatever else he may have lost, Bloomberg has smashed the record for flushing money down the electoral toilet.

The race is now Biden’s to lose, but it is far from over. Biden has so far relied on the patronage of wealthy and powerful people. He is likely to enjoy more of that from Bloomberg, and may hope for the ultimate endorsement from Barack Obama (though it’s unclear that Obama will endorse anyone in the primaries).

But his campaign still has serious organisational weaknesses. While endorsing Biden, Clyburn took the unusual step of publicly pointing out that he lacks campaign infrastructure. Biden has been a less-than-inspirational speaker on the campaign trail. His single most powerful asset is a widespread belief that he can beat Trump.

Sanders has a genuine movement behind him, which the last two winners of the presidential election also had. His social-democratic agenda has changed the debate in the Democratic Party and the nation. Progressives have decisively chosen him over Elizabeth Warren. But Sanders has an uphill fight now that Democratic moderates have settled on a single champion.