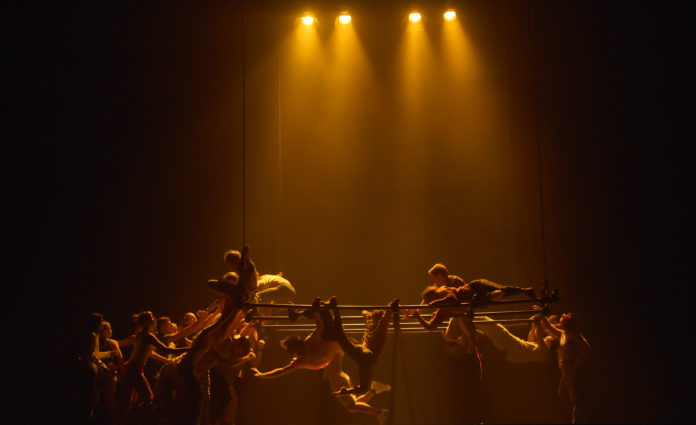 Review: Leviathan, directed by Yaron Lifschitz. Circa in collaboration with Co:3 Australia, MAXIMA Circus and CircusWA for Perth Festival.

As the audience takes their seats, two feet poke out from beneath the curtain.

In hindsight, it’s the first trick they play on us, lulling us with this image of a human body involved in the ordinary business of lying down.

Things get complicated fast. The single figure is joined by a cast of about 40 on a vast stage filled with discarded party streamers. It’s as if we’ve arrived too late for a fancy dress party. There’s an astronaut, a king, an assortment of other costumes.

A great height, and a stomach-dropping fall.

For the next 80 minutes, Leviathan progresses through a melange of bodies moving through space. Transforming shapes, they morph from humans to totems to mythical creatures (perhaps the leviathans of the title) back to humans. From extraordinary to ordinary and back again.

Each sequence stands on its own while also seeming to build on what came before. At its most basic level, Leviathan is a series of bodies climbing up and climbing down, falling and getting up again, but the work’s cumulative effect evokes an almost contemplative, trance-like reverie in the viewer.

Directed by Yaron Lifschitz for Brisbane’s Circa Ensemble in collaboration with three West Australian companies – Co:3 Australia, MAXIMA Circus and CircusWA – Leviathan is a highly accomplished work and a one-of-a-kind collaboration.

Casts of this size are a rare treat and a great outcome for any festival. Leviathan – in process, form and content – speaks directly to Perth Festival’s celebration of “our town, our place and our Festival”. Bringing together four companies means the cast members range from children to young adults to adults, and the sense of on-stage community is palpable.

Dressed in an eclectic array of contemporary streetwear they could have been any of the (mostly) young audience members. I could have sworn I’d seen one of them leaning against a street sign on my way into the theatre.

Community underpins Lifschitz’s vision for the piece. In the program he refers to the frontispiece of Thomas Hobbes’ book Leviathan as inspiration:

A monster king rising up out of the sea whose body is constituted by these tiny little people – the populace.

Taking Hobbes’ exploration of power, the individual and society, Lifschitz explores individual freedom and the responsibility each of us has to be part of a community by acknowledging our interdependence. He does so by creating a performance that moves between extraordinary individual feats and startling images of the mass at work.

It is a repeated motif, but one that stays vivid and fresh in the hands of this extraordinary creative team and cast.

Somewhere between contemporary circus and dance, Leviathan moves between exquisitely precise choreography and kinaesthetic improvisation, between union and seeming chaos.

When the party space transforms, it is possible to imagine a human chessboard that becomes a school playground that becomes a prison. The associations flow free and fast. At points throughout, an overhead perspective of the performers is provided via a live-feed projection at the top of the stage: the kaleidoscope of possibilities expands further.

Read more: Sequins and symphonies: how opera ran away with the circus

In a show full of many extraordinary physical feats of strength and dexterity there is an astonishing duet between a young woman in a fluoro-green tank top and a young man in fluoro-pink shoes.

Performed with physical and emotional intensity, he seems to lift and manipulate her with just his hands placed on her face. Just when our eyes tell us he’s lifting her it becomes apparent that her strength is doing just as much of the work. It is one of many tricks of light, time, space and physical ability that cause a literal gasp in the audience as it comes to a momentarily terrifying then stunning conclusion. The work of both performers here is truly mesmerising.

The cast is characterised by a compelling seriousness of purpose. For the majority of the performance they are an anonymous mass, as the lighting celebrates the imprint of their bodies in space, rather than their faces.

However, towards the end, there is a moment of direct eye-to-eye connection with the audience as each of them gives a final straight-to-camera curtain call.

Leviathan plays at the Regal Theatre until March 1.

Is Trump’s truculence an attempted coup or the last-ditch efforts of a man whose star is fading?

COVID has presented unique challenges for people with eating disorders. They’ll need support beyond the pandemic

Is Trump’s truculence an attempted coup or the last-ditch efforts of...

Silky oaks are older than dinosaurs and literally drip nectar –...

Children may transmit coronavirus at the same rate as adults: what...

It seemed like a good idea in lockdown, but is moving...