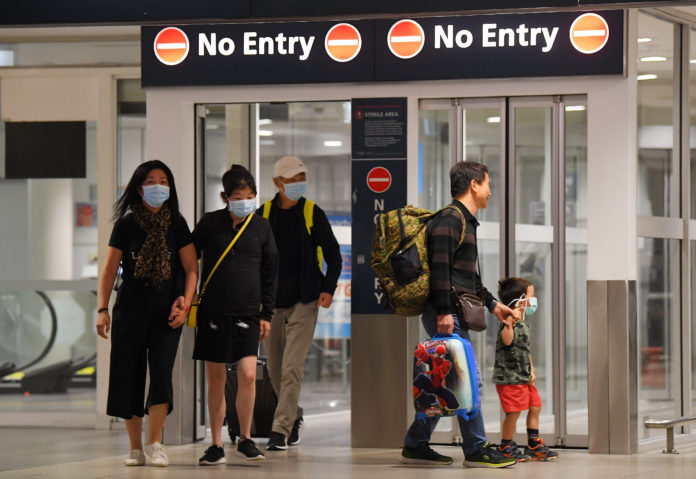 Seen as a political narrative, the Morrison government’s handling of the coronavirus (COVID-19) fits the patterns of its approaches on border security and anti-terrorism.

Stressing the central imperative is to “keep Australians safe”, it has taken the most risk-averse path.

With the exception of returning Australians and their immediate families, the border has been closed to people who’ve been recently in China. On Thursday the ban was extended until at least February 29, which would be a month’s shutdown.

The border-closure went beyond the World Health Organisation’s stand, which did not recommend any travel restrictions, although many other countries did impose them.

Those Australians from the government-organised flights from Wuhan and the cruise ship Diamond Princess were put into quarantine on Christmas Island and a centre near Darwin.

All through, the government has stressed it has acted on the advice of its medical experts.

Coincidentally, the political advice would probably have accorded with the medical. People are easily spooked; they want to feel protected to the maximum. And with only a handful of cases in Australia, that goal has been achieved.

The travel ban is now a week-to-week matter.

The problem for the government is that the timing of its lifting will inevitably have an element of arbitrariness.

The government has to be able to say it is based on medical advice. Even so, whenever the border is reopened, there’ll still be many new COVID-19 cases emerging in China.

But the longer the ban stays – in other words, the more cautious the government remains – the greater the cost to the Australian economy.

It sounds, and is, a crude proposition, but there is a trade off here between Australia’s health security and its economic wellbeing, and at some point the balance will have to swing in favour of the latter.

Scott Morrison said on Thursday the “first priority” was the health and welfare of Australians, but added, “We’re also very mindful though of the significant economic impacts of this virus, but that’s not restricted to Australia, that is happening globally”.

Morrison flagged the government was working on some arrangements to mitigate the effect on the university sector, which has seen about 100,000 students in limbo.

If the ban is kept on too long, deepening the economic harm, the government will pay the price later. There is already some questioning of whether the ban’s economic damage is greater than the risk posed by an open border.

There was a hint in the government’s statement extending the ban that its lifting might not be too far away. The health experts had advised “there are signs the spread of the coronavirus in Chinese provinces outside Hubei province is slowing. We will need to watch closely whether this positive trend continues as people return to work after the holidays,” it said.

The coronavirus has been a sharp reminder of how vulnerable Australia is, despite all its strengths. This vulnerability has been exposed on multiple fronts: specific industries and exports with considerable China-dependency, notably tertiary education and tourism; parts of the small business sector; the wider economy, and the budget.

The economic fallouts are direct and indirect. The impact of the virus on the Chinese economy will flow through to the international economy, adding to the headwinds Australia faces.

Read more: Coronavirus: the blow to the Chinese economy could be felt for years

COVID-19 is set to be more serious for our economy than the impact of the bushfires, and its implications are harder to assess.

No one can judge how long the disruption will last. It affects supply chains, with some Australian manufacturers finding their inputs hard to get because of factories closing in China. As well, with fewer air services available, it is more difficult to dispatch some products to China.

The virus’s economic impact will be at the centre of discussions at the G20 finance ministers meeting in Saudi Arabia which treasurer Josh Frydenberg attends this weekend.

On another front, COVID-19 has seen the latest manifestation of that strand running back through Australian history, which used to be called our fear of the “yellow peril”.

Leaving aside loss of business from absent Chinese tourists and students, there is no objective reason why customers should have deserted Chinese restaurants. Certainly there should be no backlash against Chinese people in Australia. But old prejudices are never far below the surface.

The Victorian government this week announced measures to show “solidarity” with the Chinese community, including lighting iconic buildings in red and gold, and roundtables to “bring Chinese community leaders together to share ideas on how to revitalise local businesses and boost trade”. The state government plans to lead a delegation of 100 Victorian businesses to China.

Coronavirus has complicated Australia’s already difficult relationship with Chinese authorities. The Chinese government has been very critical of the travel ban, calling it “extreme” and an “overreaction”.

While the federal government wouldn’t be too concerned about the criticism itself – the Chinese were unforgivably secretive about the virus initially – it potentially complicates a situation where there are more matters to be negotiated.

These include arrangements by tertiary institutions for online courses.

Phil Honeywood, CEO of the International Education Association of Australia and chair of the government’s Global Reputation Taskforce, which is advising on how best to assist the education sector post coronavirus, says the Chinese government will have to approve such online courses.

“Any offshore qualification has to be signed off by the Chinese ministry of education in order for the Chinese student, when they go home, to get the official certification from their own government that would help them in the job market,” he says.

“And this is a challenge in itself, at the best of times, with some courses. And now we have this conundrum of … will the ministry of education agree to compromise on what in the past has been fairly rigid rules around academic credit from online learning?”

COVID-19 will have a long-term impact on the thinking of universities, a number of which were already aware of the danger of the sector’s over-reliance on the Chinese market.

In economic terms, the government hopes COVID-19 will not go beyond a short sharp shock. It is a salutary reminder of how much Australia’s economic fortunes are tied to one country, but in practical terms the scope for reducing that dependence is very limited.