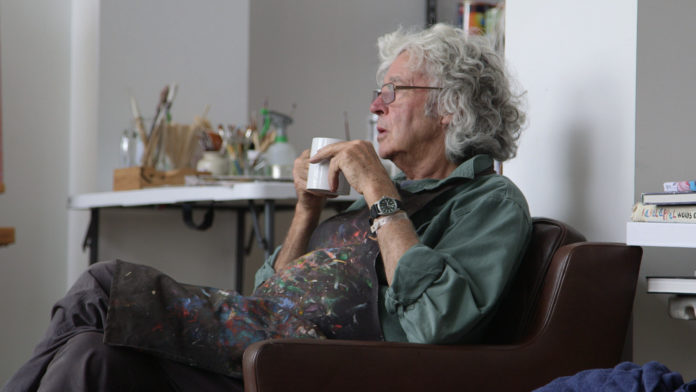 The cartoonist’s task is to give voice to ideas and sentiments that are repressed in culture. For Michael Leunig, it was an odd poetic impulse – a strand of lyricism, which Australians probably never suspected they possessed – that gave rise to his iconic work. According to the National Trust, he is an Australian National Living Treasure.

As the subject of Kasimir Burgess’s documentary The Leunig Fragments, Leunig is an oddly esoteric figure.

He is pictured sipping tea from a pristine white Ikea cup, curled up foetal-like on a couch, staring wide-eyed at the sky, or out across the misty water; dressed like a solitary trainspotter in a dark anorak and felt scarf, strangely child-like, but with lots of wild grey hair.

Leunig is best known for his daily newspaper cartoons featuring the whimsical characters Vasco Pyjama and Mr Curly. Together with his signature images of the duck, the teapot, an odd star or waning moon, they have supported his commentary on Australia’s political, social and emotional life for decades.

Audiences will also know Leunig for his paintings and poetry, but more so for the “Leunig industry”, the dozens of newspaper lift outs, posters and calendars, not to mention mugs, aprons, totes, tea towels and assorted kitsch synonymous with Australian popular culture through the 1980s and 90s.

For all its ubiquity, Leunig’s whimsy can be deceptively cutting, or, as Philip Adams puts it, “weaponised”.

The edge manifests itself in the disturbing use of light, dark, wings, halos, and clouds — let’s face it, this is an oddly religious mythos for a newspaper cartoonist (he once told Andrew Denton he liked the sound of the word, “God”) – and it hints at Leunig’s darker, more strident and uncomfortable themes.

Born in Footscray in Melbourne’s inner west, Leunig was the son of an abattoir worker and the second eldest of five children. He became estranged from both his parents and siblings. He tells Burgess he never attended his parents’ funerals; never visited their graves; and doesn’t know where they’re buried. He doesn’t mention his sister, feminist cartoonist Mary Leunig, once in the course of Burgess’ film.

Burgess documentary storytelling is restrained and unobtrusive. He doesn’t impose a narrative, but, as his title suggests, lets the “fragments” tell the story. Shaped by image, soundtrack and theme, the result feels more like a musical score than conventional filmic story telling. It stumbles into the terrain of the literal only once or twice.

There’s also a layer of self-reflectivity that pulls the narrative together, giving context through the elements of docudrama that are woven into the film – the auditioning of a child actor to play Leunig as a boy is priceless; also conspicuous is the visual motif of the English teacher; a female muse from Leunig’s childhood that he seems to have carried with him throughout his life.

But at the end of it all, Leunig the man remains a mystery, which, I suspect is precisely Burgess’ point.

Leunig’s career is not without controversy; a fact this documentary rather evades.

Leunig’s parody of John Howard as the prime minister who couldn’t stoop lower than he had, “No Disrespect Intended, however … ”, which was notoriously dropped from the Sydney Morning Herald, doesn’t appear. Nor does the controversy that swirled around the cartoons about the occupation of the Gaza.

His condemnation of the War on Terror is featured but treated poetically rather than specifically, or politically.

Worryingly, Leunig’s recurrent blasts at women he portrays as selfish or neglectful float across the screen and are seldom contextualised or even questioned.

After all, Leunig is well known for his anti-feminism: his opposition to childcare services for women who need to work to support their families, the outrageous irresponsibility of his anti-vaxx cartoons also aimed at mothers, his mindless tirades against young women who, he alleges, love their digital devices more than they love their babies.

Leunig’s short animation Dripping Tap, for example, runs almost full length in this documentary. In this video a husband, unable to sleep, tells his wife about the hopes and dreams and life and romance that is leaking out of his heart and into the mattress. Leunig’s punchline, delivered by the wife, is not only unkind, it is fundamentally chauvinist. “No, it’s definitely the cold tap in the laundry” is predicated on the assumption that women – unlike men – have no hopes or dreams or poetry, just domestic concerns.

Women, like the figure of the teacher muse in this film, are just there to support men.

This documentary is beautiful, but it’s also more than a little deceptive in the way that it skates seamlessly across the surface of Leunig’s thoughts. Burgess should have dug a little deeper, down into the dark.

The Leunig Fragments opens in cinemas from February 13.