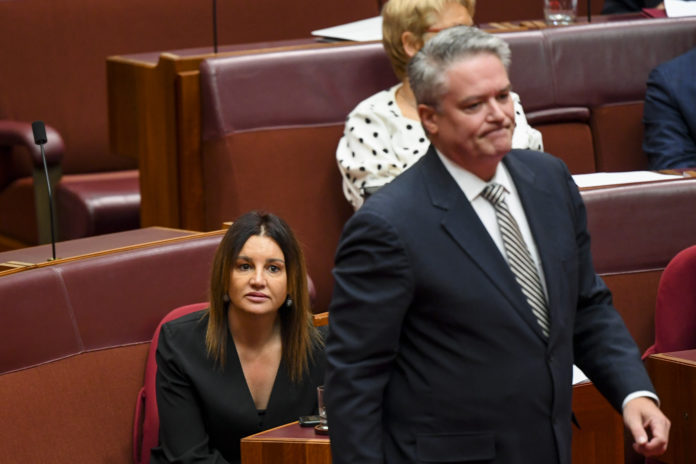 A bid to hobble Senate leader Mathias Cormann in retaliation for the government’s refusal to produce the report from top public servant Phil Gaetjens on Bridget McKenzie failed after Pauline Hanson withdrew her support and Centre Alliance split.

Under the plan, Cormann would not have been allowed to answer questions in the Senate on behalf of the prime minister, represent him at estimates, or sit at the centre table in the chamber. The ban would have applied until March 6 unless the government tabled the report.

Initially Pauline Hanson signed up to the motion but then at the last moment withdrew her support. One Nation was the decider – if its two votes had stayed with the Labor-initiated motion, it would have passed.

With one Centre Alliance senator abstaining, the vote was lost 35-36.

Centre Alliance’s Rex Patrick spoke strongly in favor of the motion, saying the Senate needed to push back against the government running to a bunker called “cabinet”.

His party colleague Stirling Griff, explaining his abstention, said later he supported the premise behind the motion but the penalty would have had no real consequences other than humiliating Cormann.

Hanson told the Senate on reflection she was against setting a precedent. “Senator Cormann is an elected member of this chamber. He has a right to his place in this chamber,” she said. “It is not up to us to take away that right that was given to him by the Australian people when they voted for him.”

Cormann said the ban proposal was completely unprecedented in the Senate’s history and claimed it exceeded the Senate’s powers.

Earlier this week the government defied a call from the Senate to produce the Gaetjens report on McKenzie’s conduct in the sports rorts affair.

Morrison asked Gaetjens, the secretary of the Department of Prime Minister and Cabinet (and his one-time chief of staff), to advise him on whether she had breached ministerial standards.

This followed an Auditor-General report finding her decisions on grants were politically skewed.

But Gaetjens concluded political considerations had not been the primary determining factor in the grants’ allocation, although he did find she had breached ministerial standards by not declaring her association with gun organisations. On this basis she resigned from the cabinet, and the deputy leadership of the Nationals – which set off a train of events still destabilising the Nationals.

Read more: View from The Hill: We need to see Gaetjens’ report on McKenzie – not least for Gaetjens’ sake

In response to a Senate order to produce the report, the government claimed public interest immunity, saying it was a cabinet document.

Labor’s Senate leader, Penny Wong, accused the government of a “disgusting political coverup” in refusing to table the Gaetjens report and other documents.

“This is all about protection of the prime minister, who is up to his neck in the sports rorts scandal,” Wong said.

“We’re being asked to accept that the findings of an independent statutory officer, the Auditor-General, should be overridden by a secret report authored by someone of dubious credibility – because Mr Gaetjens is Mr Morrison’s mate, his former chief of staff, and that inquiry was commissioned by Mr Morrison to get exactly the advice he wanted so that he could do what he had already decided,” Wong said.

Earlier this week, crossbencher Jacqui Lambie launched a scathing attack on the government’s refusal to release the report.

“We’re supposed to trust this so-called independent process that found that senator McKenzie made a mistake in not declaring her shooting club membership, but not that she misused taxpayer funds.

“According to the prime minister, we’re supposed to trust that there was no basis for the suggestion that political considerations were the primary determining factor,” she told the Senate.

“Does he take millions of Australians out there for absolute morons?”