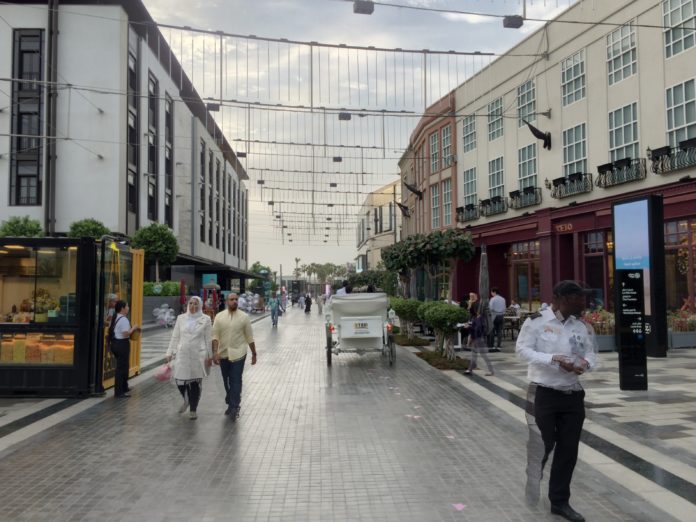 Dubai became known for its gargantuan architectural gymnastics and mega shopping malls earlier this century. Today it is increasingly being recognised for its manufactured urban precincts, and large-scale events and festivals. Behind this shift has been an approach to urban development that prioritises the visitor’s experience.

…are seeking an experience, they want to take it home with them, or look back on an event as something like a new adventure – one that they may never have a chance to do again. People expect a complete experience that is distinctive in each place.

Placemaking is playing a key role in all this. Advocates for placemaking in the Western world articulate it as a bottom-up process generating activated, inclusive and enriching urban spaces.

In Dubai, however, autocratic ruler Sheikh Mohammed bin Rashid al Maktoum is driving top-down placemaking of key urban projects. In a bid to turn Dubai into one of the cultural epicentres of the world, in 2014 he urged:

Let us work as one team to transform our city into a cultural hub that attracts creative artists … a vibrant place for all.

Supporting these ambitions is a government target of 20 million tourists a year visiting the city by 2020.

Read more: Your choice of holiday destination is a political act

Delivering this cultural experience are Dubai’s gargantuan property developers, including Emaar, Meraas, Dubai Properties and Nakheel. All are linked to Sheikh Mohammed and his ruling family and have placemaking-driven urban projects under way around the city.

“Brand Dubai”, the creative arm of the government media office, supports these developers through street art and art installations. These “communicate positive messages about Dubai’s unique culture, values and identity” and, by extension, Dubai’s leadership.

Most significant of the urban projects is the revitalisation and extension of the historic Dubai Creek districts. Sheikh Mohammed describes the area as the “very heart and soul of Dubai”. Other key placemaking projects include:

Collectively these projects are elegantly designed and enjoyable enough to visit. However, they also embody socio-cultural agendas, a dimension of such projects that the urban professions (inclusive of placemaking) tend to overlook.

Read more: Sense of place: messier than it ever was, so how do we manage this shifting world?

One of the key values of urban public space is that it carries the potential for random social encounters. Sociologist Richard Sennet argues that such encounters with difference is the key quality of true urbanity; that the density and diversity of people in public space has a civilising function that produces tolerance of difference and enables the formation of new identities.

Clearly a very multicultural city, such as Dubai, could function as Sennett suggests. But this is (often) not the case. Placemaking in Dubai carefully packages urban projects to offer highly choreographed and exclusive experiences for wealthy consumers, whether tourists or locals.

Dubai’s unskilled migrant underclass is effectively denied entry to such heavily place-branded projects. They are kept out not by fences, but by various “soft” strategies including high parking fees, lack of public transport, and aesthetic codes that signify a project’s exclusiveness.

As a result such projects (often) become “protected playgrounds”, which strip away the uncertainty and anonymity from urban life. As urban critic Kim Dovey explains, this “avoidance of risk leads [to the] sanitisation” of the urban experience, which otherwise enriches a city’s culture.

Nostalgic narrative has a powerful subtext

Much of the placemaking in Dubai has also been focused on recreating the traditional urban forms of a pre-petroleum Dubai, as destinations for Emiratis and wealthy tourists and expatriates. Examples of this nostalgia-laced placemaking include the Old Town, Souq Al Bahar, Souq Madinat Jumeirah, and Al Seef along Dubai Creek.

Further to its superficiality, the placemaking and design profession’s willingness to revive such traditional charades has a political dimension that goes unacknowledged. Cities do not “have” a memory – they “make” one for themselves with the aid of symbols, images, rites, ceremonies, places, and monuments. Dubai’s rulers use nostalgic urban forms, generated through placemaking, to construct a narrative that the rule of Sheikh Mohammed culminates a logical progression from Dubai’s ancient history to the present day.

The propagation of such narratives in Dubai is a flow-on effect of the Arab Spring. It has led to a harsher tone on issues of identity and national culture. Increasingly, locals are calling openly for state intervention to defend against “threats” allegedly posed by foreigners to “national culture”.

Sheikh Mohammed’s keen interest in branding urban open spaces in Dubai is not coincidental. The mobilisations of the Arab Spring all took place in urban spaces such as Tahir Square in Cairo and Bahrain’s Pearl Roundabout. Attempts to promote particular nostalgic images of urban spaces in Dubai are, in part, an attempt to claim these spaces as not being open to appropriation for protests – subtle or overt.

Read more: How city squares can be public places of protest or centres of state control

Placemaking in Dubai is laced with complex power relations. This remains unacknowledged in much of the academic literature on placemaking.

Placemaking in Dubai – in some instances – has collapsed into a form of place branding that obscures societal exclusion, serves autocratic political agendas and grinds down urban authenticity. Dubai’s development companies are exporting their models of development to a vast region. It is important to scrutinise placemaking’s role in this concerning model of development.

This article is based on a longer version to be published in LA+ Interdisciplinary Journal of Landscape Architecture, no 11 (2020), and the book Desert Paradises.

– ref. Been to Dubai lately? It’s a city where top-down placemaking serves its political masters – https://theconversation.com/been-to-dubai-lately-its-a-city-where-top-down-placemaking-serves-its-political-masters-128859