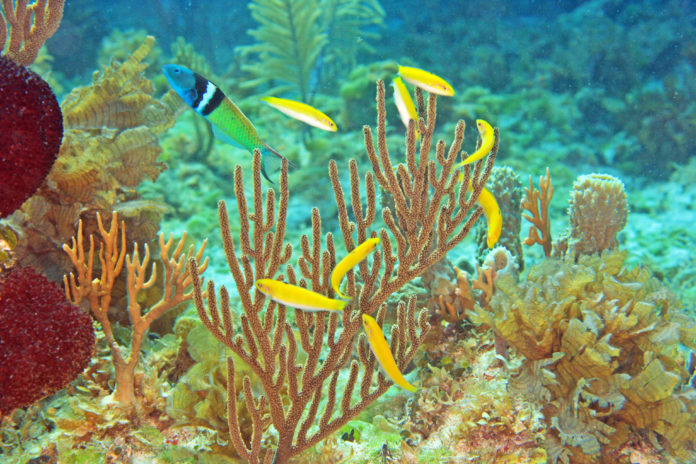 The bluehead wrasse is a fish that lives in small social groups in coral reefs in the Caribbean. Only the male has a blue head – signalling his social dominance over a harem of yellow-striped females.

If this male is removed from the group, something extraordinary happens: the largest female in the group changes sex to become male. Her behaviour changes within minutes. Within ten days, her ovaries transform into sperm-producing testes. Within 21 days she appears completely male.

But how does the wrasse change sex, and why did evolution select this system?

Also, given that fish share sex-determining genes with mammals, would an understanding of this provide new insight into how sex works in humans and other animals?

How does the transformation happen?

The trigger for sex change in the bluehead wrasse and some other species is social. When the male fish is removed, the largest female immediately senses his absence and adopts full male breeding behaviours the same day.

How this social cue translates into molecular action remains a bit of a mystery, but it probably involves stress. High levels of the stress hormone cortisol are associated with temperature-based sex determination in other fish and reptiles. Cortisol probably alters reproductive function by impacting sex hormone levels.

Stress could be the unifying mechanism that channels environmental information into a change in sex.

Our research traced changes in the activity of all 20,000-odd bluehead wrasse genes during the female to male transformation.

Read more: Sex lives of reptiles could leave them vulnerable to climate change

Unsurprisingly, we found the gene that produces the female hormone (estrogen) rapidly shuts off, and genes responsible for making male hormones (androgens) are turned on.

We also noticed changes in the activity of developmentally important genes whose roles in sex determination remain unknown. This included genes known to “epigenetically” regulate the activity of other genes.

Epigenetics refers to regulation “above the gene”. For example, there are many fish and reptile species in which the sex of developing embryos is determined by environmental cues, such as the temperature at which eggs are incubated. The sex is not determined by different genes, but by the environment impacting the activity of these genes.

Similar mechanisms regulate adult sex change in fish, so this may be important in translating the social cue into molecular action.

Surprisingly, we saw the turn-on of some powerful genes that are active in embryos and stem cells. These genes keep cells in a neutral embryo-like state, from which they can mature (differentiate) into any tissue type. They can also revert differentiated cells to an embryo-like state.

This suggests that transitioning from ovaries to testes in wrasse involves reversing the cell differentiation process – something scientists have argued about for decades.

What are the advantages?

Researchers have identified more than 500 fish species that regularly change sex as adults.

Clown fish begin life as males, then change into females, and kobudai do the opposite. Some species, including gobies, can change sex back and forth. The transformation may be triggered by age, size, or social status.

Read more: Climate change can tip the gender balance, but fish can tip it back

Sex change is an advantage when an individual’s reproductive value is greater as one sex when it is small, and greater as the other sex when it grows bigger.

Sex change might also advantage a population recovering from overfishing, which often targets larger fish and leaves the population deficient in one sex. Thus, a mechanism for replacing the missing sex would be an advantage.

Male and female wrasse differ in size, colour, behaviour, but especially in their reproductive organs – the ovary and testes.

Sex change in the wrasse involves complete remodelling of the gonad from an ovary producing eggs to a testis producing sperm.

This differs from other fish that routinely change sex when they get big enough. Their gonads contain both male and female tissues, and sex change occurs when one outgrows the other. So, fish employ all sorts of strategies to get the most out of sex.

In contrast, humans and other mammals determine sex via a gene on the male-only Y chromosome. This gene triggers the formation of testes in the embryo, which unleash male hormones and direct male development of the baby.

Read more: What makes you a man or a woman? Geneticist Jenny Graves explains

The human sex system is nowhere near as flexible as that of fish or reptiles. There is no evidence any environmental factors influence the sex determination of mammalian embryos, let alone cause sex change in adults.

That said, humans share with all vertebrates (including fish) about 30 genes that control ovary or testis differentiation. Mutation in any of these genes can tilt development toward male or female, resulting in atypical sexual development, but never sex change.

Perhaps an understanding of epigenetic changes in fish sex can offer us valuable insight, as we wrestle with new ideas about human sex and gender.

– ref. What we learn from a fish that can change sex in just 10 days – http://theconversation.com/what-we-learn-from-a-fish-that-can-change-sex-in-just-10-days-129063