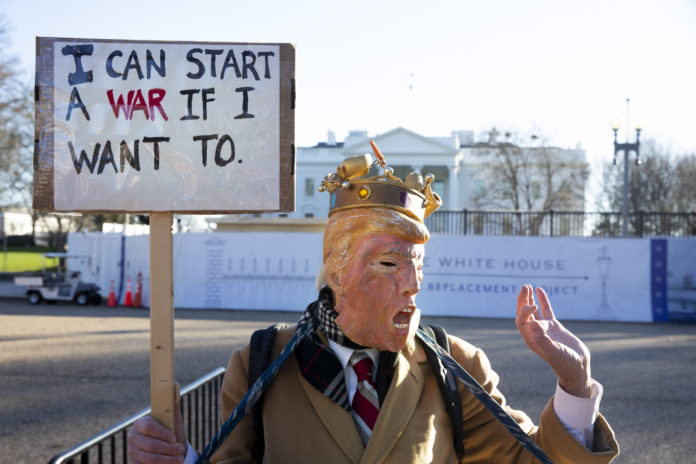 Since the US assassination of Iranian general Qassem Soleimani, the immediate crisis appears to have dissipated. However, the wider ramifications pose a worrying precedent for international affairs.

For many, the killing was unexpected. But this was no Trump administration miscalculation. It’s the latest in a wider decay of the liberal norms that underpin diplomacy, conflict resolution and the day-to-day functioning of interstate relations.

Once championed by Washington, these rules have become increasingly rejected under President Donald Trump. That threatens to inject even more instability into our global system.

What are norms in international relations?

“Norms” is the term foreign policy people use to mean actions that are implicitly or explicitly acknowledged as reasonable for states to undertake – like a rulebook that guides the conduct of international relations. Norms influence everything from human rights protection to when and how it is appropriate to use force.

Norms differ from laws, as they lack formal enforcement mechanisms. Nevertheless, there can be major repercussions when they are violated.

For instance, in previous centuries, war was seen as a natural part of statecraft and something to be celebrated. However, this view has changed markedly, largely due to the catastrophic great wars. Today, war is viewed by most countries as something to be avoided, and only used as a last resort.

This has led to an overall decline in major conflicts and the establishment of a range of international bodies designed to prevent, constrain and moderate war.

Norms provide a kind of “standard operating procedure” for states, which is especially pertinent in times of crisis and uncertainty. Understanding that one’s rivals generally wish to avoid conflict allows states to formulate policies aimed at deescalation and détente.

When countries deviate from these norms, however, it injects unpredictability into the system. This can lead to miscalculation, panicked escalation and, ultimately, violent conflict.

The rise of the ‘liberal international order’

The most influential body of norms today are encapsulated in what foreign policy analysts call the liberal international order, which emerged from Western consensus after the second world war.

This order does several important things, such as:

The liberal international order rejects actions – such as the assassination of state officials like Soleimani – which are likely to inflame, rather than resolve, tensions.

Many scholars and analysts argue that such norms have been a significant factor in the period of relative global peace since the second world war.

The US and liberal international norms

Over the past 70 years, the US been at the centre of many of the institutions that promote these rules, including the WTO, NATO, UN and IMF.

While the constraints of the liberal international order have not always benefited it – Washington has lost numerous trade disputes in the WTO, for instance – the US has been able to shape the very nature of the international system.

It’s one thing to win in a game, quite another to dictate the rules by which that game is played.

As a result, the US has sought to promote itself not just as an adherent of liberal norms, but as an exemplar of them. Notable exceptions not withstanding, this has been a position held across both Republican and Democratic administrations, from Harry Truman to Barack Obama.

Why assassinations matter to international norms

The US abandoned the practice of political assassinations in the wake of the infamous Church committee of 1975.

This inquiry exposed repeated CIA attempts to kill foreign leaders and officials. Such clandestine activities were seen as out of sync with the strengthening liberal norms of the day. If the US was really committed to promoting the order, how could it engage in actions that flagrantly undermined peace and stability?

Read more: Iran vows revenge for Soleimani’s killing, but here’s why it won’t seek direct confrontation with the US

After the inquiry, the US halted its assassination programs, and adopted alternative methods of dealing with troublesome regimes. These included sanctions and funding and training opposition groups.

In the modern era, the targeting of state officials in assassinations is understood to be strictly verboten and reckless. This position allows officials to engage with more confidence and good faith in diplomacy, and dissuades states from engaging in such activities.

Upsetting the balance of the world order

In retrospect, Trump’s willingness to reject liberal norms on assassinations hardly seems out of character for someone who has shown profound hostility for them.

Trump has undermined longstanding alliances and weakened important mechanisms of collective cooperation, all while encouraging the worst predilections of authoritarian leaders.

Trump’s blase attitude towards the importance of liberal norms and institutions has left traditional allies feeling increasingly insecure and unable to rely on the US.

Dictatorial leaders of rival states have felt empowered by Trump’s own penchant for authoritarian behaviour at home, and more confident to violate international norms without fear of significant collective reprisal.

Soleimani’s assassination presents a further worrying decline in the influence of liberal norms. Not only does it position the US as a transgressive state with little concern for the rules of the international system, it also provides precedent for states to engage in such activities themselves.

At the best of times, this would be an unpleasant development.

Within the chaos of our current world “order”, however, the resumption of political assassination poses serious concerns for the future stability of the entire international system.

– ref. Political assassinations were once unthinkable. Why the US killing of Soleimani sets a worrying precedent – http://theconversation.com/political-assassinations-were-once-unthinkable-why-the-us-killing-of-soleimani-sets-a-worrying-precedent-129622