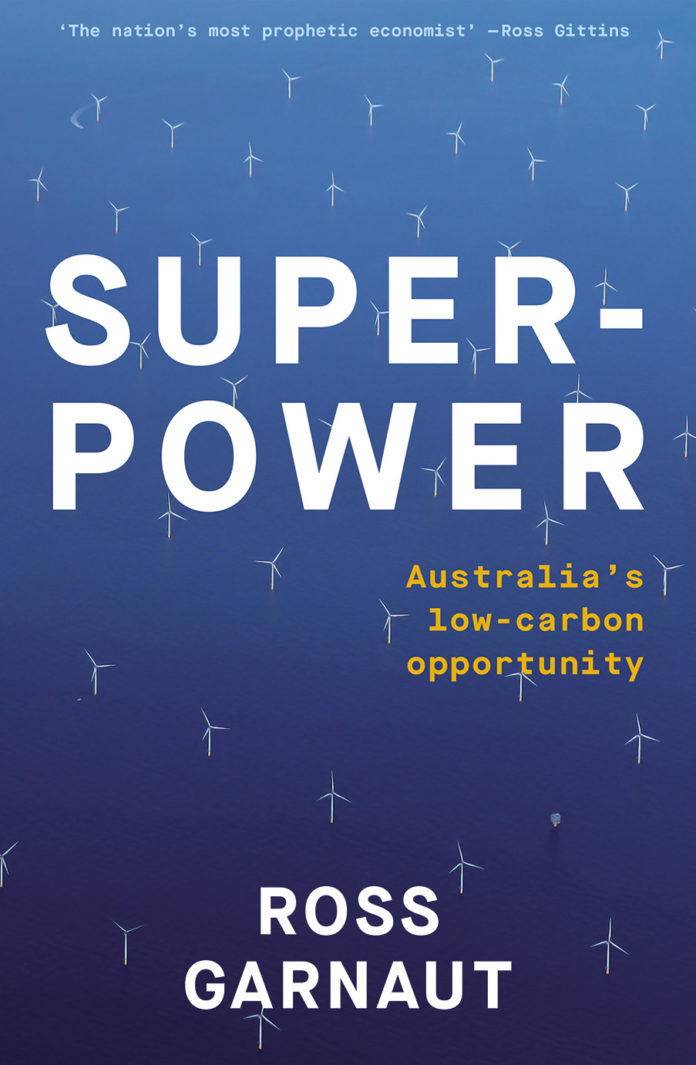 One of the dominant ideas buzzing around the internet is that there’s little we can do to escape the prospect of more frequent and worse bushfires – ever.

That’s because there’s little we can do to slow or reverse the change in the climate.

Australia accounts for just 1.3% of global emissions. That’s much more than you would expect on the basis of our share of world’s population, which is 0.33%. But even if we stopped greenhouse gas emissions as soon as we could and started sucking carbon back in (as would be possible with reafforestation) it’d make little difference to total global emissions, which is what matters – or so the argument goes.

But this argument ignores the huge out-of-proportion power we have to influence other countries.

There’s no better indicator of that than in Ross Garnaut’s new book Super-power: Australia’s low-carbon opportunity.

We’re more important than we think

Garnaut conducted two climate change reviews for Australian governments, the first in 2008 for the state and Commonwealth governments, and the second in 2011 for the Gillard government.

In the second, he produced two projections of China’s emissions, based on what was known at the time.

One was “business as usual”, which showed continued very rapid increases. The other took into account China’s commitments at the just-completed 2010 United Nations Cancun climate change conference.

China’s annual emissions matter more than those of any other country – they account for 27% of the global total, which is a relatively new phenomenon.

The bulk of the industrial carbon dioxide already in the atmosphere was put there by the United States and the Soviet Union, who have been big emitters for much longer.

Egged on by the US Obama administration and by governments including Australia’s under Julia Gillard, China agreed at Cancun to slow its growth in emissions, and at the Paris talks in 2015 hardened this into a commitment to stabilise them by 2030.

Garnaut’s 2011 projections showed growth moderating as a result of China’s commitment, which was at the time a cause for optimism.

When he returned to the numbers in 2019 to prepare his book, he was stunned. Egged on by the example of countries including the US and Australia, China had done far, far better than either “business as usual” or its Cancun commitments. Instead of continuing to grow rapidly, or less rapidly as China had said they would, they had almost stopped growing.

The graph, produced on page 29 of Garnaut’s book, is the most striking I have seen.

Since 2011, China’s emissions have been close to spirit-level flat. They climbed again only from 2017 when, under Trump in the US and various Coalition prime ministers in Australia, the moral pressure eased.

From the start of this century until 2011, China’s consumption of coal for electricity climbed at double-digit rates each year. From 2013 to 2016 (more than) every single bit of China’s extra electricity production came from non-emitting sources such as hydro, nuclear, wind and sun.

There are many potential explanations for the abrupt change. Pressure from nations including the US and Australia is only one.

What happened once could happen again

And there are many potential explanations for China’s return to form after Trump backslid on the Paris Agreement and Australia started quibbling about definitions. An easing of overseas pressure is only one.

But, however brief, the extraordinary pause gives us cause for hope.

Australia can matter, in part because it is hugely respected in international forums for its technical expertise in accounting for carbon emissions, and in part because of its special role as one of the world’s leading energy exporters.

Garnaut’s book is about something else – an enormous and lucrative opportunity for Australia to produce and export embedded energy sourced from wind and the sun at a cost and scale other nations won’t be able to match.

Some of it can be used to convert water into hydrogen. That can be used to turn what would otherwise be an intermittent power supply into a continuous one. That enables around-the-clock production of the green steel, aluminium, and other zero-emission products Japan, Korea, the European Union and the United Kingdom are going to be demanding.

At least three consortia are drawing up plans.

There’s not much to lose

There’s much that needs to be done, including establishing the right electricity transmission links. But Garnaut believes it can all be done within the government’s present emissions policy, helping it achieve its emission reduction targets along the way.

What’s relevant here is that moving to ultra-low emissions would do more. It could give us the kind of outsized international influence we are capable of. It could help us make an difference.

– ref. In fact, there’s plenty we can do to make future fires less likely – http://theconversation.com/in-fact-theres-plenty-we-can-do-to-make-future-fires-less-likely-129341