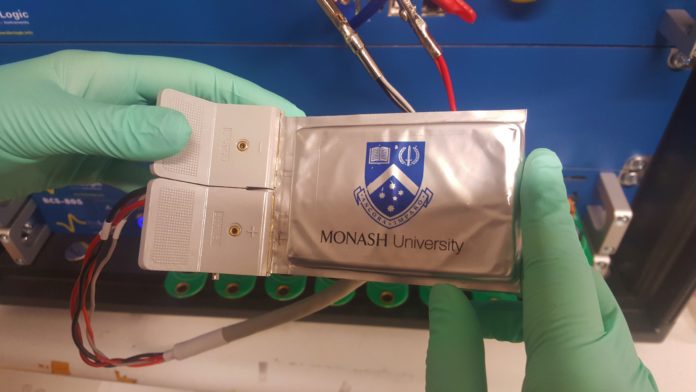 Lithium-ion batteries have changed the world. Without the ability to store meaningful amounts of energy in a rechargeable, portable format we would have no smartphones or other personal electronic devices. The pioneers of the technology were awarded the 2019 Nobel Prize for chemistry.

But as society moves away from fossil fuels, we will need more radical new technologies for storing energy to support renewable electricity generation, electric vehicles and other needs.

Read more: Charged up: the history and development of batteries

One such technology could be lithium-sulfur batteries: they store considerably more energy than their lithium-ion cousins – in theory as much as six times the energy for a given weight. What’s more, they can be made from cheap materials that are readily available around the world.

Until now, lithium-sulfur batteries have been impractical. Their chemistry allows them to store so much energy that the battery physically breaks apart under the stress.

However, my colleagues and I have engineered a new design for these batteries which allows them to be charged and discharged hundreds of times without breaking down. We hope to have a commercial product ready in the next 2–4 years.

What’s so good about sulfur?

Lithium-ion batteries require minerals such as rare earths, nickel and cobalt to produce their positive electrodes. Supply of these metals is limited, prices are rising, and their mining often has great social and environmental costs.

Industry insiders have even predicted serious shortages of these key materials in the near future, possibly as early as 2022.

In contrast, sulfur is relatively common and cheap. Sulfur is the 16th most abundant element on Earth, and miners produce around 70 million tonnes of it each year. This makes it an ideal ingredient for batteries if we want them to be widely used.

What’s more, lithium-sulfur batteries rely on a different kind of chemical reaction which means their ability to store energy (known as “specific capacity”) is much greater than that of lithium-ion batteries.

A person faced with a demanding job may feel stress if the demands exceed their ability to cope, resulting in a drop in productivity or performance. In much the same way, a battery electrode asked to store a lot of energy may be subjected to increased stress.

In a lithium-sulfur battery, energy is stored when positively charged lithium ions are absorbed by an electrode made of sulfur particles in a carbon matrix held together with a polymer binder. The high storage capacity means that the electrode swells up to almost double its size when fully charged.

The cycle of swelling and shrinking as the battery charges and discharges leads to a progressive loss of cohesion of particles and permanent distortion of the carbon matrix and the polymer binder.

The carbon matrix is a vital component of the battery that delivers electrons to the insulating sulfur, and the polymer glues the sulfur and carbon together. When they are distorted, the paths for electrons to move across the electrode (effectively the electrical wiring) are destroyed and the battery’s performance decays very quickly.

Giving particles some space to breathe

The conventional way of producing batteries creates a continuous dense network of binder across the bulk of the electrode, which doesn’t leave much free space for movement.

The conventional method works for lithium-ion batteries, but for sulfur we have had to develop a new technique.

To make sure our batteries would be easy and cheap to manufacture, we used the same material as a binder but processed it a little differently. The result is a web-like network of binder that holds particles together but also leaves plenty of space for material to expand.

These expansion-tolerant electrodes can efficiently accommodate cycling stresses, allowing the sulfur particles to live up to their full energy storage capacity.

Read more: A guide to deconstructing the battery hype cycle

When will we see working sulfur batteries?

My colleagues Mainak Majumder and Matthew Hill have long histories of translating lab-scale discoveries to practical industry applications, and our multidisciplinary team contains expertise from materials synthesis and functionalization, to design and prototyping, to device implementation in power grids and electric vehicles.

The other key ingredient in these batteries is of course lithium. Given that Australia is a leading global producer, we think it is a natural fit to make the batteries herea.

We hope to have a commercial product ready in the next 2–4 years. We are working with industry partners to scale up the breakthrough, and looking toward developing a manufacturing line for commercial-level production.

– ref. Batteries made with sulfur could be cheaper, greener and hold more energy – http://theconversation.com/batteries-made-with-sulfur-could-be-cheaper-greener-and-hold-more-energy-129135