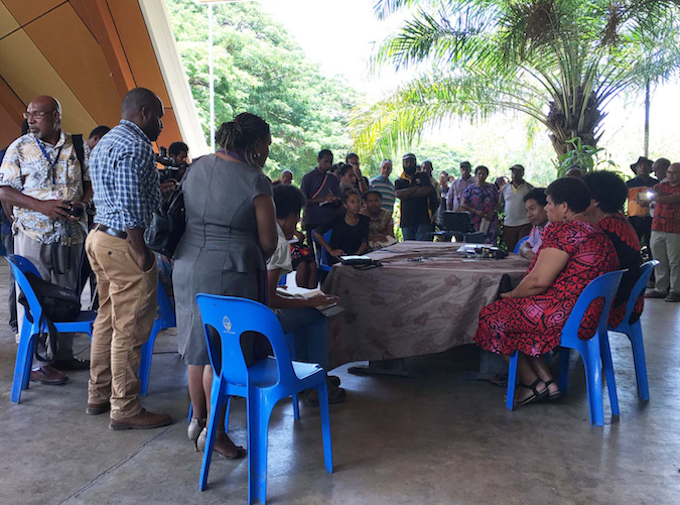 A new council at the university of Papua New Guinea could soon be appointed, says an academic who led last week’s staff boycott at the country’s main national university.

Dr Linus Digim’Rina, head of the Division of Anthropology, Sociology and Archaeology, is a key member of the National Academic Staff Association (NASA).

Dr Digim’Rina said almost all university staff boycotted their duties for three days last week, following the suspension of the council in January.

READ MORE: UPNG shutdown crisis – the facts behind the turmoil

Higher education minister Pila Niningi cited allegations of corruption and sexual misconduct against the council in his decision to install an interim body.

But the interim council’s composition angered staff which led to the boycott, Dr Digim’Rina said.

“We avoided describing it as a strike action because there was no resolution from NASA … So it was a voluntary call on individual members of staff, everybody who are concerned about governance issues.”

‘New team altogether’
“One, complete the process of the appointment of the vice chancellor. Two, conduct an independent investigation into the allegations… And three, appoint a new council with a new composition, a new team altogether,” he said.

“That’s why we committed ourselves to return to classes last Thursday.”

The staff presented a list of names for appointment to the council which is subject to approval by the National Executive Council (NEC), Dr Digim’Rina said.

“That will be presented to NEC on Thursday, deliberated and a decision reached,” he said.

But some of the interim councillors could remain.

“The minister indicated during the presentation that he would like to keep not all but a few of his own appointees including the chancellor and that didn’t go down well with university staff,” Dr Digim’Rina said.

Room for more
Kennedy said he expected his interim council to be in place until the end of the year but noted there was room for two more members to be appointed.

But the composition of the interim council does not adequately represent the university, Dr Digim’Rina said.

“A one-sided majority of the members have come from management, corporate administration and real estate backgrounds,” he said.

“There were also allegations rolling around… whereby the minister seemed to be bringing in friends and business partners into the council membership.

“Although it’s only an interim council it’s all to do with business. It’s not representative enough of the academic programmes within the university or civic organisations within society.”

“The previous council wasn’t necessarily performing at its best. We generally felt after so many years the council could have done a bit better,” he said.

Slow responses
But its performance may have been hindered by previous administrators, including the vice-chancellor and registrar, failing to implement council decisions in a timely fashion, Dr Digim’Rina said.

“I can say the previous council together with the previous administration, they were quite slow. The need for change was recognised by university staff,” he said.

“And in a strange way the minister’s intervention was quite necessary.”

As for completing the appointment of the vice chancellor, Frank Griffin had come through a robust selection process under the previous council that staff were “proud of”, Dr Digim’Rina said.

The minister, has appointed Kenneth Sumbuk as interim vice chancellor, who Dr Digim’Rina said was one of the candidates rejected during Professor’s Griffin’s selection.

But even though the minister had lost confidence in the previous council, he could not now claim to be sceptical of Professor Griffin, Dr Digim’Rina said.

“If that were the case the minister would have stepped in before the process was completed. Not after.”

No public outrage, no vigils: Australia’s silence at violence against Indigenous women