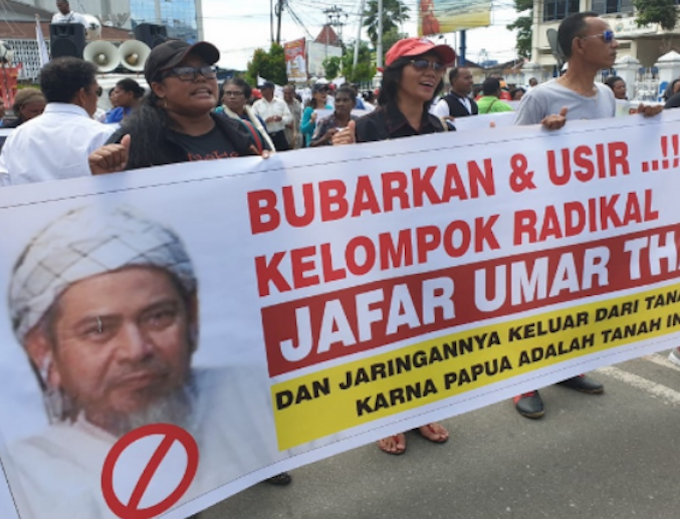 Protesters march to the Papua governor’s office in Jayapura on Monday carrying a banner that reads ‘Dissolve and expel Jafar Umar Thalib and his group from Papua, because it is the land of the Gospel.’ Image: Benny Mawel/ucanews.com

A radical Muslim cleric faces being kicked out of Papua after more than 2000 Christians in Indonesia’s Christian-majority eastern province demanded his expulsion.

Members of the minority Muslim community have also called for Ja’far Umar Thalib, a cleric who gained notoriety in a deadly conflict between Christians and Muslims in Ambon, in the Maluku Islands, almost 20 years ago to be kicked out.

The cleric recruited a “jihadist army” in the unrest that claimed the lives of about 5000 people between 2000 and 2003.

The demand to expel him from Papua was made during a protest outside the Papua governor’s office in the provincial capital Jayapura on Monday. Protesters said that if the governor did not expel Thalib they would do it themselves.

They accused the cleric of violence against Christians since he arrived in the area in 2015, with the latest case occurring on February 27 when he and some followers attacked a Christian man in his home for playing music next to a mosque.

The mob also attacked and injured the man’s 14-year-old son.

“We are all here to drive him away peacefully,” Barangsano said.

‘Harmony damaged’
“His presence has damaged interreligious harmony in Papua, and if no action is taken he will turn this place into a land of conflict,” said Rev Dorman Wandikbo, president of the Evangelical Church in Indonesia.

“He should not be here,” he said, adding that Thalib’s influence was spreading in Papua. “We don’t want him to create another conflict like the one that devastated Ambon.”

Theo van der Broek, a Dutch-born Catholic leader, said Thalib and his group pose a serious threat to the people of Papua.

“Papuans want peace, not fighting. So, before any conflict escalates, the government must seriously respond to this appeal,” he said.

Victor Tibul, chairman of the Papuan Christian Students Movement, said Thalib has the potential to transform Papua from a “land of the Gospel” into a headquarters for terrorist groups.

Taha Alhamid, a Papuan Muslim leader who was also present at the rally, said his community also believed that Talib should be returned to his home town.

“We want the police to immediately remove him from Papua,” he said.

Provincial secretary Herry Dosinaen agreed with the protesters that Thalib had outstayed his welcome.

“The government is ready to take action,” he said.