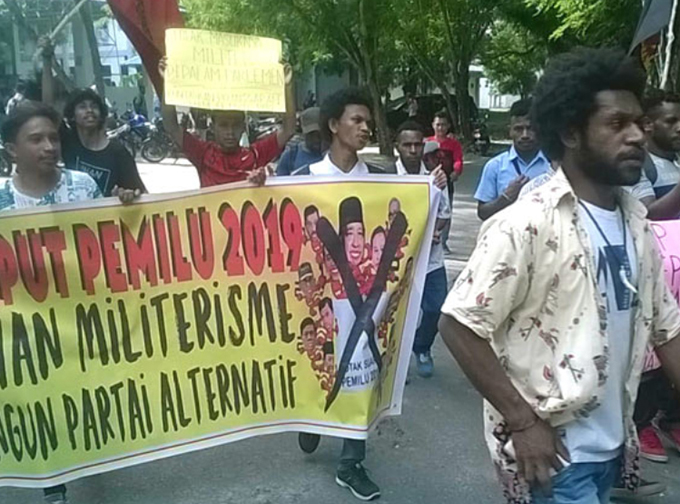 By Chen Toisuta in Ambon, Maluku

Scores of students from the Student Struggle Centre for National Liberation (Pembebasan) and the Papuan Student Alliance (AMP) have called on the public to boycott or spoil votes in the legislative and presidential elections next month.

The students, who said they were part of the 2019 Election Boycott Committee (Komite Boikot Pemilu, KBP), held the protest action at the Dr Johanes Leimena statue traffic circle in the city of Ambon, Maluku, last week.

“Golput [defacing ballot papers] is the most sensible choice. And this is our position in the 2019 pemilu”, said Abner Holago, one of the speakers at the action.

According to Holago, electoral participation levels have steadily declined between 1999 and 2014 by as much as 70.9 percent. Part of the reason for this decline is blamed on “administrative disorganisation”.

“This is a warning that progressively more people who are entitled to vote are not participating in the pemilu. From one year to the next more people don’t believe in [the elections], are disappointed with and sick of the country’s political system”, he said.

During the action the protesters made six demands including calling for people not to vote in the 2019 elections, to fight against militarism, to build an alternative political force, the withdrawal of the TNI (Indonesian military) and Polri (National Police) from the land of Papua, an end the theft of farmer’s land and for the ratification of the draft law on the elimination of sexual violence.

Background
Golput (Golongan Putih, White Group): The term first emerged as a campaign by students in the 1971 elections and derives its name from marking the white section of the ballot paper rather than a party symbol or candidate’s picture thereby making the vote invalid.

In recent years the term has broadened to include not just intentionally casting an invalid vote but also vote abstention.

Under new electoral laws introduced in 2003, golput, defacing a ballot paper or simply not voting is no longer an electoral offence.

Although it is widely believed that publicly advocating golput is illegal, unless money or other enticements are offered simply campaigning for or encouraging others not to vote is not in fact a crime.