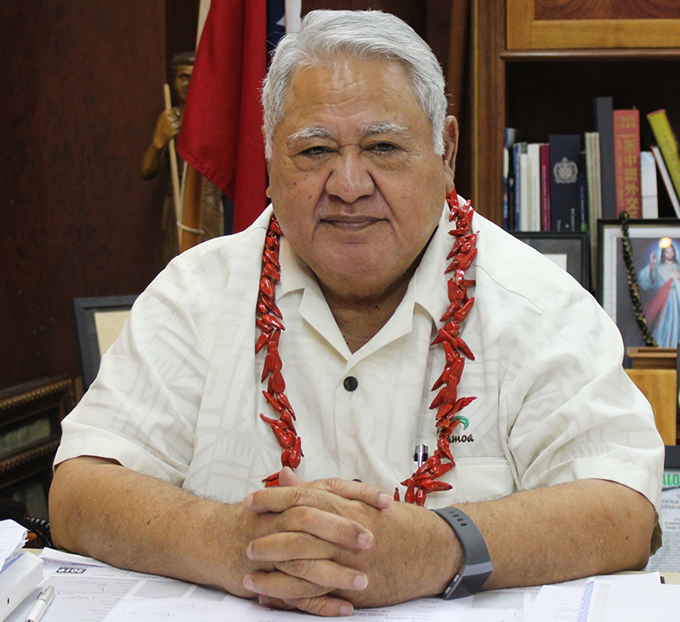 By Mata’afa Keni Lesa, editor of the Samoa Observer

It’s all happening in Samoa today.

For such a small country, there really is no dull moment.

With the latest political maneuvering within the ruling Human Rights Protection Party (HRPP), and the developments in the halls of law and justice during the past couple of days, things are certainly heating up.

The worry is that there is no “atomic bomb” nearby – otherwise all these controversial developments could collectively trigger and cause something – we might regret later on. There is certainly a feeling of uneasiness in the air; that cannot be denied.

We say this because if as Christians we claim that there are no accidents in life, then we must pause and do some soul searching, to discover the true meaning to all these developments. What are they trying to tell us? What are the lessons we can take from it? And why are they happening?

There must be a method to thy madness. Folks, these things don’t just happen out of nowhere. There have been events building up to what we are seeing today, so that we get the feeling something has got to give, somewhere. And it’s not a question of whether it will happen; it’s rather of question of when and how it’s going to unfold.

As powerful as people say he is, Prime Minister Tuilaepa Dr Sa’ilele Malielegaoi has given a rare glimpse into his fears this week, perhaps explaining a lot of the things he’s been doing and saying lately.

What fear?
What is that fear? Well he’s afraid of the possibility that the political machine called the H.R.P.P. could fall apart.

How do we know? Well he said it himself.

In justifying the party’s decision to forcefully remove long serving member, La’auilalemalietoa Leuatea Polata’iva, Prime Minister Tuilaepa indicated he wants to use the decision against La’auli as a warning to other potential rebellion party members.

“If we don’t do this now, this will be the beginning of the destruction of this party because others will say; well nothing has been done to him so I can try too,” Tuilaepa admitted this week.

The reality is that it’s hard to imagine such a well-oiled machine like the HRPP destructing. It’s even harder to see that happening with a lone member expressing different views, like La’auli has done.

But they say a journey of a thousand miles begins with a single step. La’auli might be alone for now, but who is to say that this is not the beginning of the end?

Which is perhaps why Prime Minister Tuilaepa is hell bent on ensuring party members get the message that no one should dare test his authority. He has thrown everything including the book to make his case here.

He continued: “When matters pertaining to the Constitution are raised where amendments are needed, no one is allowed to [vote against the party’s position]. This is where this agreement comes into play.”

“This (HRPP) law applies to when the Constitution is the subject of discussions and amendments. It is why if you decide to vote against, that is you officially informing the party you want to leave and you don’t want to be involved anymore. Which is exactly what was done.”

Interesting, very interesting indeed. Where this episode will head to next we can only wait and see.

The trouble for the government – and Prime Minister Tuilaepa – is that it’s not just being attacked from within, there is a growing number of people – especially Samoans residing overseas – who have become so bold they are starting to stand up and speak their minds.

One of them went the extra mile and threw a pig’s head and dog food at the Prime Minister when he was speaking during a Samoa Airways launch in Brisbane recently. In Samoa this week, Talalelei Pauga was offered an opportunity to explain his actions and what he said was quite telling.

“My approach was on the political level and the reason why I used the pig’s head was because he called the people of my country stinking pigs,” he said. “He also called our people dogs and all that. If you don’t have respect for my people why should I have respect for him?”

‘No fear’
Pauga went on to say that he has “no fear, and I will die for my people.” Well that’s a bit extreme, isn’t it? But it perhaps shows the depth of feeling that exists when it comes to some of the latest political developments in Samoa today.

Speaking of extremes, another one unfolded on Friday when the police charged the man known as “King Faipopo” for allegedly making defamatory statements online against Prime Minister Tuilaepa.

Malele Paulo (his real name) had come to Samoa for his mother’s funeral when he was picked up by the police and charged on Friday night. He spent the night in police custody before he was finally let go yesterday, after surrendering his passport.

Paulo becomes the first person to be charged under the Criminal Libel Act, re-introduced by Prime Minister Tuilaepa himself, last year. This is going to be very, very, very interesting.

This editorial was published in the Sunday Samoan, the weekend edition of Samoa’s only daily newspaper, Samoa Observer. It is republished with permission.