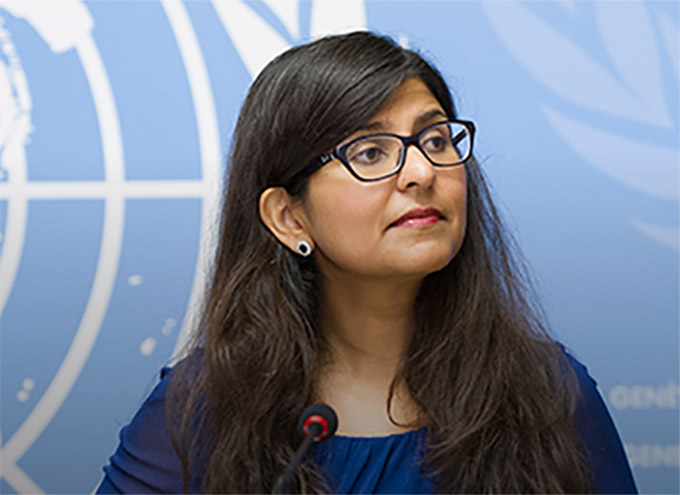 UN’s OHCHR spokesperson Ravina Shamdasani … “there are many West Papuan grievances, and we’ve seen this in many parts of the world where grievances are unaddressed, or there’s a suppression of dissent.” Image: UN interview screenshot

West Papuan rights to freedom of speech and peaceful assembly have been defended by the Office of the UN High Commissioner for Human Rights (OHCHR) in a response to the mass arrests of Papuan protesters during flag raising ceremonies earlier this month.

“These are indigenous people at the end of the day,” says spokesperson Ravina Shamdasani.

“So they are trying to defend their rights to be able to pray and to be able to retain their culture, their links to their land, but also the Papua region of Indonesia has not benefitted from all the economic development that the rest of the country has had.

“The rates of malnutrition are quite high.”

Shamdasani said in a radio interview with UN News that while President Joko “Jokowi” Widodo had been initiating development projects, “the problem here is that the people haven’t really been consulted.

“There haven’t been meaningful consultations [with] the people who are actually affected by this.”

In the interview, Shamdasani put into context the recent arrests of nearly 600 citizens who were detained for participating in West Papua’s national day, December 1, a global event for commemorating the first raising the Morning Star flag – banned by Indonesian authorities.

She also answered questions about development, armed conflict, and trying to gain access to the region.

Behind the West Papuan protests
The UN interview transcript:

[UN NEWS] The mass arrest of demonstrators in Indonesia who were attempting to mark a national day for indigenous people in the east of the archipelago, has been condemned by the UN human rights office, OHCHR.

More than 500 activists were detained at the start of the month – though they’ve since been released.

Ravina Shamdasani (RS): Last weekend there were peaceful protesters in the Papuan region of Indonesia who were celebrating what they call the “West Papua National Day,” and some 500 of them were arrested, detained. They were all subsequently released within 24 to 48 hours, but this does not take away from the fact that they should not have been arrested in the first place, and that this is not the first time this has happened.

It happens year after year and on several occasions during the year as well.

Daniel Johnson, UN News – Geneva (UN): What exactly are they protesting for apart from the fact that it’s their national day?

RS: Quite often these protests are protests for independence from Indonesia and of course we understand that the situation is complex. The Indonesian government is certainly not happy with these protests, but these people have their right to freedom of peaceful assembly and expression. So there was really no reason to arbitrarily detain them.

RS: Well, these are indigenous people at the end of the day. So they are trying to defend their rights to be able to pray and to be able to retain their culture, their links to their land, but also the Papua region of Indonesia has not benefited from all the economic development that the rest of the country has had. The rates of malnutrition are quite high. Now the current president of Indonesia has been initiating development projects. The problem here is that the people haven’t really been consulted. There haven’t been meaningful consultations of the people who are actually affected by this.

UN: Why is that? What structures are there in Papua, in Indonesia, to do this or not?

RS:The president has his analysis that the problem is one of economic development, um so he is trying to tackle that. But what we have emphasised, and what our previous High Commissioner during a visit to Jakarta in February of this year emphasised, was that development can of course bring with it access to many fundamental goods and services that can vastly improve people’s well beings, but if they cannot voice their concerns, and if they can’t participate in these decisions, the resulting development may not really increase their welfare, because it doesn’t really address the problems that they have.

UN: Ok, and what is your presence on the ground in this part of Indonesia given that it’s a huge country archipelago?

RS: We do not have a presence in Indonesia but we have a regional office in Bangkok that covers Southeast Asia – So we are, you know, in close contact with human rights defenders, civil society, government officials as well.

We have actually been seeking access to this region for quite awhile now. In February the High Commissioner was promised access, and we are still in discussions with the government of Indonesia to make that happen.

UN: This issue is not one that I’ve seen very often having been here what four years now. What’s your hope for the follow up and how many other similar cases are there that go really beneath the radar of international mainstream media?

RS: Too many international mainstream media tend to focus on the big conflicts. However there are many places like Papua, which are quite small, which have historic kind of long standing structural issues and unfortunately may not come up to the radar until there is an outbreak of conflict

What our office tries to do is try to ring the alarm bells early on, before the situation rises to the level of an armed conflict.

UN: You’re not suggesting it’s at that level now? Of course.

RS: No we’re not suggesting it’s at that level now, but there are many grievances, and we’ve seen this in many parts of the world where grievances are unaddressed, or there’s a suppression of dissent. And then people take the law into their own hands because they feel they are not being heard.

This is actually happening at a very low level in Papua at the moment. There are armed groups that are operating. In fact, just this week I believe a number of people were killed. These were government contractors who were there doing a development project.