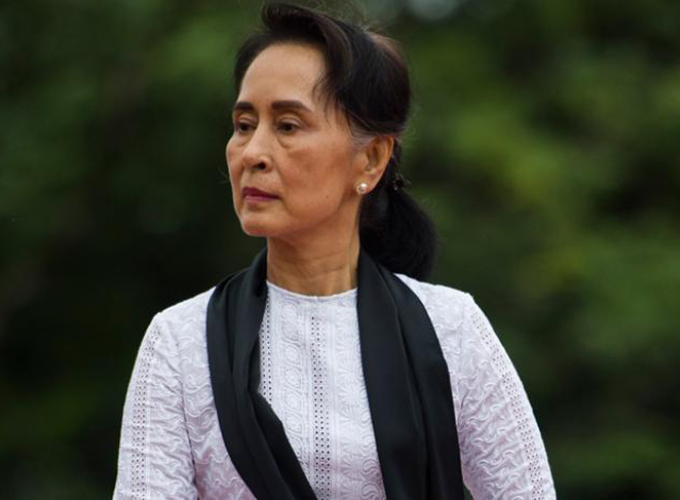 RSF open letter to Aung San Suu Kyi … “How are we to understand the sentence passed on these two journalists at the start of the week? What credibility can the rule of law and judicial independence have in Myanmar after this farce?” Image: Ye Aung Thu/AFP/RSF

Five days after Reuters reporters Wa Lone and Kyaw Soe Oo were sentenced to seven years in prison on a trumped-up charge, the Paris-based media freedom watchdog Reporters Without Borders (RSF) has written to the head of Myanmar’s government asking her to end her deafening silence and to intercede on behalf of the two journalists.

This is the open letter:

An iniquitous sentence of seven years in prison on a trumped-up charge of violating the Official Secrets Acts was passed at the start of this week on Wa Lone and Kyaw Soe Oo, two reporters with the Reuters news agency who have already spent nearly nine months in detention.

Their only crime was to investigate the September 2017 massacre of 10 Rohingya civilians by members of Myanmar’s army. In the course of shedding light on the terrible reality of the ethnic cleansing carried out by the army and its auxiliaries in the north of Rakhine State, the news agency’s reporters discovered summary executions, mass graves, the torching of villages and systematic efforts to eliminate of all trace of the atrocities.

As you know, the two reporters were crudely framed by the police, as a police captain, Moe Yan Naing, acknowledged in court on 20 April. The thoroughness of their investigative reporting nonetheless forced the Tatmadaw, Myanmar armed forces, to recognise the reality of the Inn Dinn massacre and to sentence seven soldiers to 10 years in prison for their role.

We are deeply saddened by your only statement about the two journalists. In an interview for NHK in June, you simply said that “they were nor arrested for covering the Rakhine issue” but “because they broke the Official Secrets Act” and that it “will be up to judiciary, it is for the judiciary to decide.” Their innocence was nonetheless glaringly obvious.

How are we to understand the sentence passed on these two journalists at the start of the week? What credibility can the rule of law and judicial independence have in Myanmar after this farce? To those who have tried to raise the issue in your presence, you have responded with “fury,” as in January with former US diplomat Bill Richardson, one of your oldest supporters, who felt obliged to resign from your international panel of advisers after you described Wa Lone and Kyaw Soe Oo as “traitors.”

Awarded the Sakharov Prize in 1990 and the Nobel Peace Prize in 1991, you have long been hailed as resolute advocate of democracy and you have defended what is one of its foundations with a great deal of vision. Speaking when you were released in 2010, you said, “the basis of democratic freedom is freedom of speech.” The following year, you assured RSF of your commitment to press freedom.

Since the end of your time under house arrest, you have on several occasions said that you reject the status of icon and that you see yourself as a politician seeking concrete results for her people. We are aware of the political circumstances in Myanmar that force you to seek compromises with the Tatmadaw’s representatives.

But nothing, absolutely nothing, forces you, as the Union of Myanmar’s head of government, to observe this deafening silence. Nothing forces you to refer to journalists’ coverage of Rakhine State as “a huge iceberg of misinformation.” Nothing forces you to go down in history as someone who betrayed the ideals on which she built her reputation.

This is why we urge you to intercede immediately to obtain the release of these two Reuters journalists. One of your closest allies, President Win Myint, has the power to grant them a pardon.

You have the ability to take action today in support of the values that you defended with courage for so long.

Nobel Peace prize winner, Aung San Suu Kyi under fire for not condemning the Rohingya’s prosecution in Myanmar. In April 2017, she said: “I don’t think there is ethnic cleansing going on.” She also refused to allow UN investigators access to the region. Video: Al Jazeera