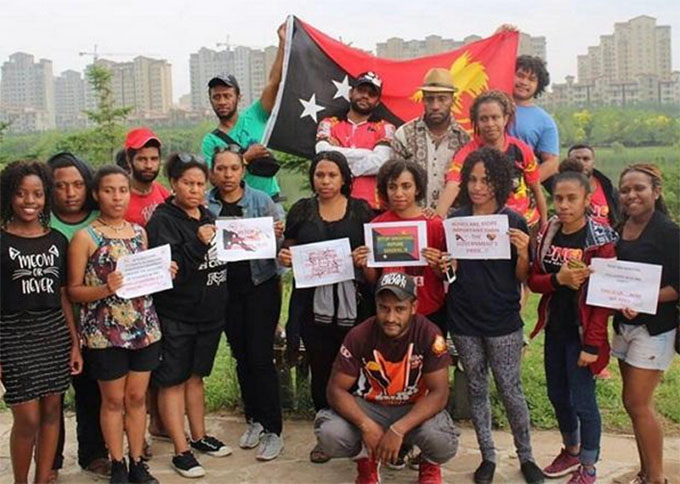 Papua New Guinean students in China protesting over a separate issue. A file picture of the Shenyang PNG Students Association members protesting over the shooting of students at the University of PNG in 2016. Image: Loop PNG

Students studying in Beijing, China, have described the move by Papua New Guinea’s Communications Minister Sam Basil to suspend Facebook for one month as “irrelevant” and damaging for education communications.

The students in a forum have expressed disappointment that there are more pressing issues that the government needs to address yet it is concerned about legislating freedom of speech for the people.

They said that being outside the country they were able to read information and connecting with family back home as many of the people do not have other social media platforms other than Facebook.

They also said through Facebook, leaders were made accountable to their actions and were condemned publicly for their wrongdoing.

“Some people abuse it but the majority use this to express themselves. Why is government so worried about it. They have better things to do than wasting time to fb issue,”  Beijing PNG students vice-president Samuel Ray said.

“The real issues are out there. We have police brutality on the rise, car theft, rural urban drift, poverty, deteriorating infrastructure both school, road and heath services. Drug shortage, TFF policy not working well etc.”

It was also raised that it is obvious that the people have already lost their trust in the government. As a result there would be no positive result coming from this temporary suspension.

‘Top shots on toes’
“Most politicians, top government officials and top shots are always on their toes for being exposed of under the table deals,” the students said.

“Our national media (with due respect to the hard working media team) can sometimes be compromised by the government. Thus leaves social media, with no restrictions on people on what they post. A national social network isn’t a solution. Data of citizens shouldn’t rest in the hands of privileged individuals to manipulate.”

An international relations student suggested that PNG’s Communications and Information Technology Department should focus more on things like how to improve network services around the country and work on helping PNG catch up to the digital era rather than trying to keep PNG away from it.

She said shutting down Facebook will not solve anything and trying to analyse its positive or negative impacts was a waste of time and resources.

“The government, instead of choosing to totally shut down Facebook, should innovate ideas on establishing appropriate alternatives especially on the imposition of penalties on those abusive users of this social media platform,” another student said.