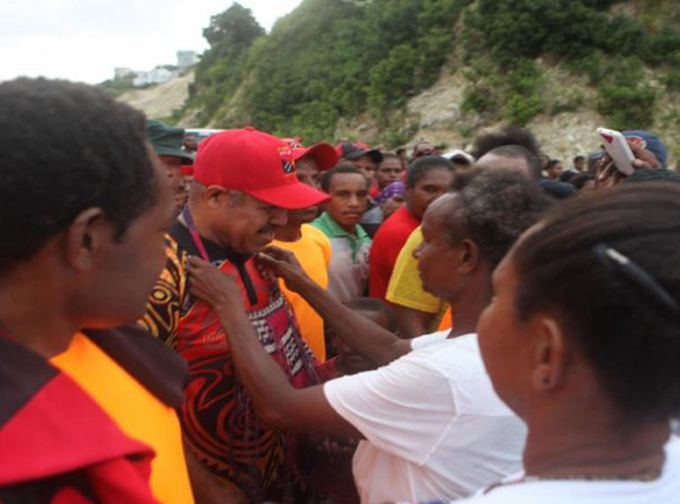 NCD Governor Powes Parkop talks to the Paga Hill mothers and receives a bilum with a “hardships” video documenting what they have had to endure since they were resettled to Six Mile and Gerehu. Image: EMTV News

They said it was an emotional day for them, to celebrate Mother’s Day in iconic Paga Hill  in Papua New Guinea’s capital of Port Moresby – a place they once called home.

Mothers who were unfortunate to have been part of the eviction of settlers from Paga Hill, capitalised on Mother’s Day to appeal for help.

It was also a symbolic gesture for them. On Mother’s Day six years ago they were evicted along with their families, and resettled to Six Mile and Gerehu. Since then, they say they have been living there under harsh conditions.

On Mother’s Day morning, they staged a peaceful march during the Walk for Life along Paga Hill road to make a statement.

Staging the march was about getting the recognition they deserved as citizens with equal rights as any other to basic services.

Weeks beforehand they had decided to reach out to the NCD Governor Powes Parkop for assistance.

Parkop had no idea that they had planned to meet him at the end of the Walk for Life event. There, they handed him a bilum containing a documentary that sums up what they have and continue to endure since they were resettled to Six Mile and Gerehu.

Gerehu group
Bessie Maiga and her family were part of the group who resettled in Gerehu. She says it has been hard on her and her family, especially when it came to finding water and employment. She said:

(Because its Mother’s Day today we celebrate. Every other day we carry large containers of water up and down the road like camels).

Bessie’s husband now lives in the city with relatives in order to keep a job that would sustain his family.

Her story is one many of them share. Some families are not as fortunate as others to have a steady income.

(Some of our husbands have jobs, other don’t. It wasn’t the same at Paga Hill when our husbands and sons would go diving for fish and we would sell it for money).

Going back to Paga Hill rekindled fonder memories of a time when life was simpler for them.

“It was home for us, and it is unforgettable” said Bessie’s daughter Serah

Their Mother’s Day march was a desperate cry for help from the government. They say they seek only to be given the decency of basic human rights and services they deserve as people of this nation.

Meleasie Goviro is an EMTV News reporter. This is article is republished by Asia Pacific Report with permission.