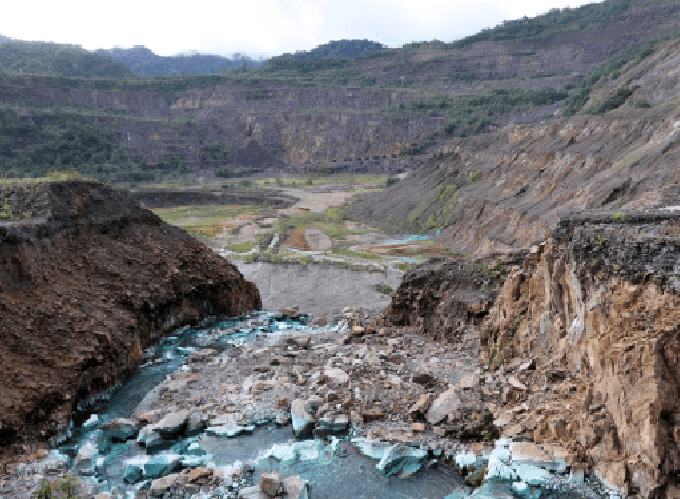 The abandoned Panguna mine site after Rio Tinto closed down the operation. Image: Business Advantage PNG/SMH

Two court hearings next week – one in Port Moresby and the other in Melbourne – will help determine the future of the exploration licence for the Panguna copper mine in Bougainville.

The decision to refuse an extension of Bougainville Copper Limited’s exploration licence and to impose an indefinite moratorium over the Panguna resource, followed a statutory Warden’s meeting in December 2017.

There was “a narrow divide between those supporting the mine to be opened by Bougainville Copper Ltd (BCL) and those that oppose it”, according to Bougainville President John Momis.

BCL has successfully sought leave to apply for a judicial review of the decision to refuse its licence extension, citing legal and procedural concerns.

“While the moratorium has been gazetted, it has no impact on existing exploration licences or applications for extension, lodged prior to the moratorium,” said BCL Company Secretary, Mark Hitchcock.

“BCL remains the holder of the exploration licence (EL1) until the matter is ultimately determined,” he said.

He has thrown his support behind a bid by Perth-based junior miner, RTG Mining, to gain the exploration licence, setting up a joint venture company, Central Exploration, of which RTG owns 24 percent.

One of RTG’s major shareholders holds another 32 percent, and the SMLOLA retains 44 percent.

Miriori’s chairmanship of the SMLOLA remains in dispute. The 367 authorised customary heads of the 510 blocks of land within the special mining lease area of Panguna say they do not recognise Miriori as the Chairman of the SMLOLA and support the extension of BCL’s exploration licence.

On the same day as the Port Moresby hearing, on May 17, BCL will be in court in Melbourne, seeking disclosure about the relationship between RTG Mining and the SMLOLA.

Miriori and other supporters admit they are being paid by RTG, but Miriori has told the ABC that the payments are legitimate salaries, not inducements.

“That is always a normal part of anything, nothing is free,” he said.

Seeking disclosure
The action seeks disclosure from RTG Mining and Central Exploration about any compensation or benefits paid to the SMLOLA.

One analyst close to the proceedings says any disclosure could determine the possibility of “unlawful interference” with BCL’s exploration licence.

For his part, Momis says his government believes it would be “untenable under current circumstances” for any developer to develop the mine.

“BCL has an extensive database of historical data and project information from the mine operations prior to closure.”

“We have some problems with RTG right now,” Momis told RNZI.

“In fact, they are causing a lot of confusion and division in the community and we are not prepared to go ahead while this situation prevails.”

Exploration data
Should RTG Mining or any other company win the exploration licence, the next battle will be over the data about the location and extent of resources.

“BCL has an extensive database of historical data and project information from the mine operations prior to closure in 1990,” said Hitchcock. “This data remains the intellectual property of the company.”

She said it might be expensive and time-consuming to obtain.

She said that under Australian copyright law, ownership of a database is not straightforward. Whether or not RTG Mining could access the data may depend on the terms of the exploration licence, any special legislation, and on the terms of any contracts or licence agreements that have been entered into.

“If [the data] was not available, having to reinvent the wheel would add significant costs,” said George.

“Perhaps the safest way of assessing value is what the market is prepared to pay.”

Hitchcock said: “We estimate it would take any other company or entity at least two-to-three years to replicate the BCL database through exploration activities and would cost in excess of A$200 million (K400 million).”