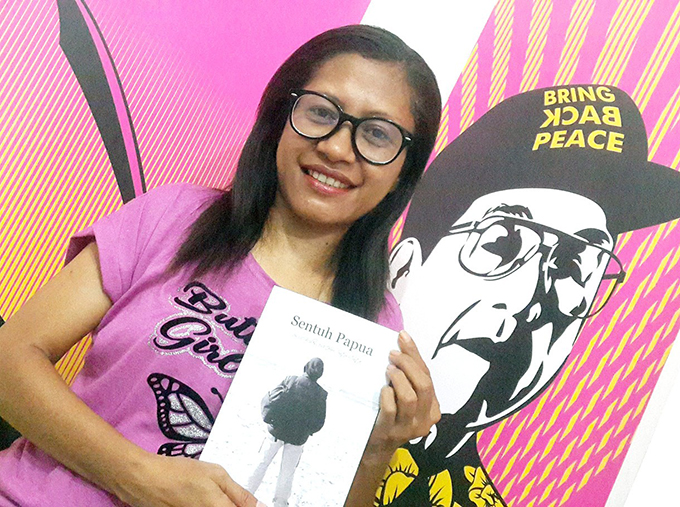 Stranger than fiction … Aprila Wayar poses with her latest novel Sentuh Papua which chronicles a Dutch journalist’s undercover reporting of Papua and is based on actual events. Image: Bambang Muryanto/Jakarta Post

A Dutch freelance journalist, Rohan (a pen name), had been interested in the political turmoil in Papua for years. In 2015, his application for a journalistic visa was denied. The 32-year-old then decided to embark on an undercover reporting assignment in the country’s easternmost province.

For 153 days, he observed the way local people lived, met with leaders of the pro-independence Free Papua Movement (OPM) in the jungle, enjoyed the beauty of Papua’s nature and met Aprila Russiana Amelia Wayar, or Emil, a local journalist who later became his girlfriend.

In the novel, Rohan’s character said foreign media agencies in Jakarta refused to publish his report on Papua, worrying that the government would revoke the visas of their Jakarta correspondents.

Emil has been in Yogyakarta since early this year to publish the book. She chose Yogyakarta because she had spent time there as a student at Duta Wacana Christian University (UKDW).

The 38-year-old author said she initially intended to write a journalistic piece that was rich in data and interviews. She used the character of Rohan to describe the lack of press freedom in Papua, human rights violations in the province and challenges to OPM’s quest for self-determination.

‘Easier to understand’
“I then chose [to write a] novel to make it easier for Papuans and Indonesians to understand the [province’s] issues,” she said.

Through the book, Emil, who used to work for independent media platform Tabloid Jubi, was determined to represent the other side of Papua’s story vis-a-vis mainstream reporting on the province, which she deemed mostly biased.

She said many journalists covering cases of human rights abuses in Papua only interviewed security personnel and neglected the victims.

“Journalists writing about Papua have to cover both sides,” she said.

However, she realised both the challenge and risks that come with reporting Papua as a journalist, as she herself often received threats and harassment while doing her job.

In her book, the characters Rohan and Amelia, who is based on herself, are chased by a group of people armed with machetes.

Open access promise
The Paris-based group highlighted the restriction of media access to Papua and West Papua as a factor that has kept Southeast Asia’s largest democracy at the bottom of the list.

Yogyakarta-based lawyer Emmanuel Gobay said Emil’s book, despite being published as fiction, was a good reference for those who want to understand Papua from both the local and professional perspective.

“This novel reflects the state of press freedom in Papua,” he said.

The novel, which Emil wrote in eight months, is her third after Mawar Hitam Tanpa Akar (Black Rose Without Its Stem) and Dua Perempuan (Two Women), both of which told stories about social issues in Papua.

Emil was the first indigenous Papuan novelist invited to the Ubud Writers and Readers Festival (UWRF) in Bali in 2012. She plans to write a fourth book in the Netherlands, where she is currently undergoing medical treatment for a heart condition.

Bambang Muryanto is a Jakarta Post journalist and an Alliance of Independent Journalists (AJI) advocate.