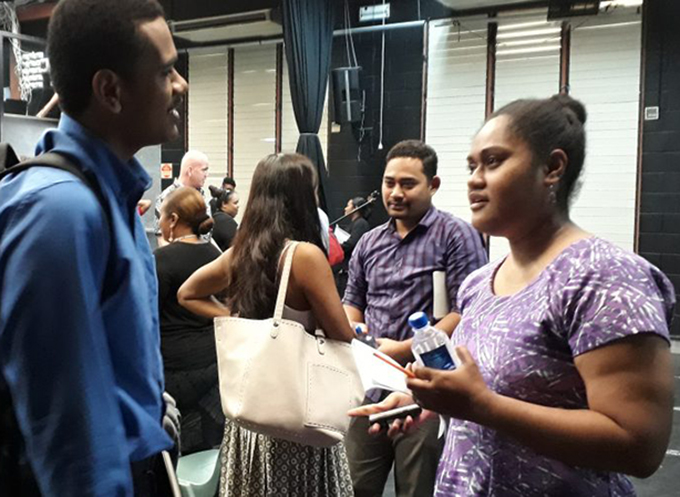 Final-year student journalists at the University of the South Pacific took centre stage at this year’s World Press Freedom Day celebrations in Fiji by participating in a panel discussion about media freedom and the challenges being faced.

USP’s journalism programme gave student journalists the platform to speak on these pressing issues yesterday rather than be spoken to.

Carolyn Kitione, a journalism and psychology double major, highlighted the risks and conflicts that journalists faced in their profession.

“When we are out in what people like to call the real world, you’re forced to realise that the things that you read about in the newspapers are a possibility of things that might happen to you as journalists,” she said.

“People talk about the glamour of having to travel but nobody wants to talk about the stones that are constantly thrown at us. People want to glamourise the interviews that we had with someone but not the substance of what is said or written.

“In the sort of environment that we live in, there is genuine concern of people getting hurt both physically and emotionally.

“There are chances that we could never work a day of our lives in the field that we choose because of one mistake.

Risks faced
“There are essentially risks that we face and conflicts that we are exposed to and when we talk about conflicts we are not necessarily talking about violence, we’re in the profession of watching our backs.”

There was also a discussion about media freedom in Vanuatu which was shared by Telstar Jimmy, who studies journalism, and literature and language.

Jimmy said although there was more press freedom in Vanuatu, there were also serious risks.

“In the 2013 Global World Press Freedom ranking, Vanuatu came seventh out of the 14 Asia Pacific countries and that was due to little regulation or censorship on the media,” she said.

“Even though this was so, the media workers were threatened and assaulted by people in power and that continued to rise from 2010 up to 2015.”

“Even though we have one of the most free press environments in the Pacific, there is also a threat in terms of upcoming challenges. One of these would be that through citizen journalism, online media would give rise to more fake news and therefore degrade professional journalism in mainstream media,” she said.

Online freedom
Another student journalist, Elizabeth Osifelo, talked about freedom of information online, the challenges and the way forward for the media in the Solomon Islands.

Contrary to the challenges faced by the media in Fiji, Osifelo said media was free in the Solomon Islands, although there were certain challenges that existed.

“Social media today in Solomon Islands has a really good flow of information but the challenge here is that it only serves a small fraction of our population. The mainstream media also heavily relies on these networks for information,” she said.

“When you do that, compensation is bound to happen and you will end up having truckloads of people arriving at your doorsteps [asking for] compensation.”

Fiji’s Media Industry Development Decree 2010 and its influence on press freedom were also discussed by student journalist Koroi Tadulala, who also majors in literature and language.

“In order for us to achieve press freedom, we must advocate for the removal of constraints that hinder the work of the media. We can talk about press freedom as much as we want, for however long we want, but as long as the constraints are in place, we will never be able to achieve true media freedom,” Tadulala said.

Tadulala also called for the removal of some provisions of the Media Decree.

People’s voices needed
USP’s deputy vice-chancellor (learning, teaching and support services), Professor Richard Coll, said it was important to recognise World Press Freedom Day because most citizens believed it was an important part of a democratic society where people’s voices needed to be heard.

Dr Coll said academics were also encouraged to make social commentary on areas within their expertise.

“I think that is an important part of the university as a media policy and since it deals with media issues, it’s better to speak about your area of expertise,” he said.

Journalism programme coordinator Dr Shailendra Singh said it was important for student journalists to participate in the World Press Freedom Day event because it was part of their studies and a platform to create awareness about issues facing the media.

“It also informs them about the situations in other countries and allows them to make comparisons with their own counties,” he said.

Laiseana Nasiga is a final-year student journalist at the University of the South Pacific.