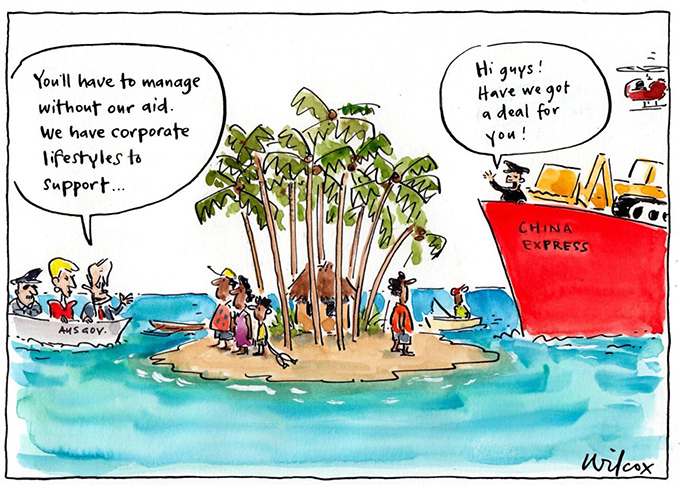 The average Australian’s conception of Pacific island nations is so limited it makes some of us wonder if they even want to understand. Our voices—and our reality—have been pointedly and repeatedly ignored in the media, and in the corridors of power.

An Australian news service breathlessly proclaims Chinese plans to build a military base only a short flight away from Brisbane, and the Canberra commentariat has kittens.

Vanuatu insiders say “it was never on the cards”.

“Yes, but it was discussed!” insist defence analysts.

“A base was never discussed and it would never happen,” says Vanuatu’s Foreign Minister.

“Yes, but a Chinese military presence is in the works!” insist the same analysts.

“Vanuatu would never agree to this and anyone who says otherwise is indulging in malicious speculation,” says Vanuatu’s Prime Minister.

“Cold warriors”
“Here’s the wharf where it’s going to happen!” announce Australian media, and a chorus of “cold warriors” claim that Australia is forsaking its God-given leadership role in the Pacific.

“We, uh, have our own leaders,” say Pacific islanders.

“Yes, but they’re drowning your countries in debt!” cry the politicos.

“Well, we’re not perfect, but there’s no crisis,” say our analysts. “Our debt to GDP ratio is less than half of Australia’s.”

“China is slyly using debt/equity swaps to take over your infrastructure!” Canberra cries.

“No, actually. Our loans don’t contain language that would allow that,” reply the islanders, who by this time are wondering why they even bother saying anything.

The Chinese Bases folderol is just the latest chorus in a litany of Australian indifference to Pacific voices. Every time some tendentious prat opens their mouth and starts telling the Pacific that what’s good for Australia is obviously good for us, the entire region sighs.

It may have escaped your attention, but there was an earthquake in Papua New Guinea recently.

It affected over half a million people, killing 150 outright and leaving 270,000 in need of humanitarian assistance. The situation remains desperate, and the breakdown of law and order in some areas has made it impossible for aid organisations to work.

You can be forgiven for not knowing this. There were no Chinese warships involved.

As you read this, massive ash falls from an active volcano are forcing 11,000 Ni-Vanuatu to relocate for the second time in six months. Thousands may never return home. No Chinese warships were involved, so again, you might not have heard.

Make no mistake: When the Pacific is in need, Australia helps. It helps more than any other nation. But the overwhelming majority of Australians don’t seem to know or care that it does.

This is the fault of the media. Specifically, it’s an editorial failure. Reporters are champing at the bit to share our stories, but producers and editors constantly baulk at the time and expense of reporting from and about the Pacific islands.

On the morning Vanuatu announced the evacuation of 11,000 people from the volcanic island of Ambae, the journos who broke the Chinese base story were still in Vanuatu. When told the news, they doubted that Fairfax would pay for them to go to Ambae to report on the exodus.

This is the same company that gladly paid a team to spend a week reporting on a defence analyst’s fever dreams, someone whom the team members themselves admitted might be paranoid.

The main difference between Beijing and Canberra is that Beijing listens. For better or for worse, Chinese diplomats listen to what Pacific leaders want. Often enough, they give it to them.

And more often than not, Australian pollies wait patiently for Pacific Islanders to finish speaking, then tell them what they need. There is a pervasive and deeply pernicious perception in the foreign policy establishment that Pacific voices don’t count.

An island with nothing but a grass shack and a few benighted dark people is deserted by its erstwhile benefactors, and left to the tender mercies of a shipload of Asian hucksters.

Without Julie Bishop and Malcolm Turnbull and the gang, we’re left helplessly clutching our cowrie shells.

The image is so absurdly parochial it borders on outright racism.

Who benefits from these Chinese wharves? We do! The people of Vanuatu. You might have heard of us. We live here.

Beginning this week, that wharf will be the landing point for thousands of people displaced by natural disaster. Australian relief ships will no doubt be welcomed, too.

Let’s see how many headlines our devastated lives derive.

My guess is zero—unless we invite the Chinese navy to help.

View from The Hill: Morrison’s net-zero plan is built more on politics than detailed policy