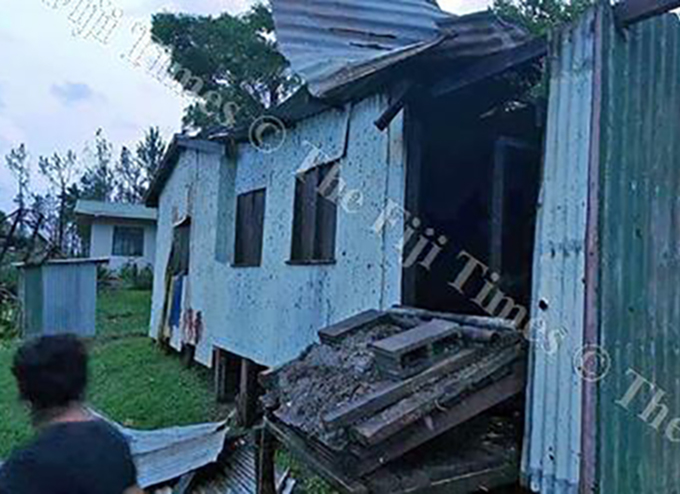 This house at Namara Village in Sanima on Kadavu had its roof blown off. Image: The Fiji Times

A resort owner on Kadavu has called on Fijians to urgently assist those on the island after the devastation caused by Severe Tropical Cyclone Keni this week.

Matava Eco Resort director Mark O’Brien said children and women were the most affected and the resort was housing several families who had lost everything in the category 3 cyclone.

“We’re looking after three families at the moment, but I know Vacalea Village lost up to seven houses and most of their houses were damaged as well,” O’Brien said.

He said most of their yaqona plantations were damaged and they were still trying to fix significant damage to their resort.

“Mainly just all kava, all the plantation of the farms are all ruined, literally all ruined,” O’Brien said.

“Even here in Matava, we have 300 banana trees, there’s a big garden so it’s all gone, finished. All the banana trees and all the mango trees and avocado trees are all gone.

“A man I talked to who’s about 80 years old said it’s the worst storm he had ever seen to hit this part of Fiji.”

‘Be prepared’ plea by editor
In today’s Fiji Times editorial, editor-in-chief Fred Wesley, said the revelation that 8147 people on the island of Kadavu were in urgent need of food and water in the wake of severe TC Keni was a concern.

But he also appealed to Fiji islanders to be better prepared for the “harsh reality” of life with cyclones.

Keni swept through the [Kadavu] island, leaving in its wake a trail of destruction. It affected all 75 villages on Tuesday.

“The scenarios that have unfolded on Kadavu are not new. This is the harsh reality of life in our nation,” said Wesley.

“Cyclones are part of our lives. They have not just come out of the woodworks so to speak.

“It pays to be prepared. People of Kadavu said they prepared for the cyclone.

“The system, in the end though, was strong. Our cyclone season extends from November through to April annually.

“It is the way things are in Fiji.

“As we go about our chores today, let us remember those who are less fortunate than us.”