Meet Mal Menaringmanu, known to many as HRH Charles, Prince of Wales.

During his brief visit to Vanuatu on Saturday, Prince Charles was greeted by one of the most lavish displays of kastom seen on these shores, arguably since his mother Queen Elizabeth visited on the royal yacht in 1974.

Hundreds turned out to see the Prince as he arrived at the Chiefs’ Nakamal in Port Vila.

Accompanied by Malvatumauri president Chief Seni Mau Tirsupe and welcomed by dozens of high ranking chiefs, the Prince walked on red mats laid the length of the roadway from the gate to the entrance of the nakamal itself.

On arriving outside the nakamal, Prince Charles presented the president of the Malvatumaturi with gifts.

The gifts given in return by the chiefs of Vanuatu were quite literally priceless. Chiefly titles are not bestowed lightly, and carry obligation as well as honour. To bestow a title on even a royal prince is something to be done with care and consideration.

The prince was dressed in chiefly regalia before the ceremony could begin.

Kastom clothes
Pentecost Chief Viraleo, leader of the Turaga kastom movement, bedecked the Prince with ornately woven kastom clothes. Although these clothes are normally worn over bare skin, the Prince was allowed to retain his suit and tie.

A leaf of the local namele palm was placed in the back of the Prince’s attire. The namele leaf is accompanied by extremely strong tabu. It is a sign of chiefly authority, and is present on Vanuatu’s coat of arms and in various other official insignia.

The mere presence of a namele leaf in a doorway or gate, for example, is enough to bar anyone from passing unless they have chiefly authorisation.

The Prince was then led to the side of the nakamal, where he was presented with a nalnal, a customary club and sign of authority.

Under normal circumstances, a newly designated chief would be expected to use the club to kill at least one pig. Although pigs were present at the ceremony, their sacrifice was omitted in recognition of the Prince’s stance against animal cruelty.

Chief Tirsupe and the Prince then shared a coconut shell filled with kava, an intoxicating beverage made from a plant thought to have derived in Vanuatu. It is a popular drink throughout the Pacific islands, and is a necessary part of many kastom ceremonies.

Prince Charles then received the name of Mal Menaringmanu. The name was chosen to reflect his high rank in the world. The name is derived from three words:

“Manareng” or “Menareng” means a very high chief residing in the mountain of a king. 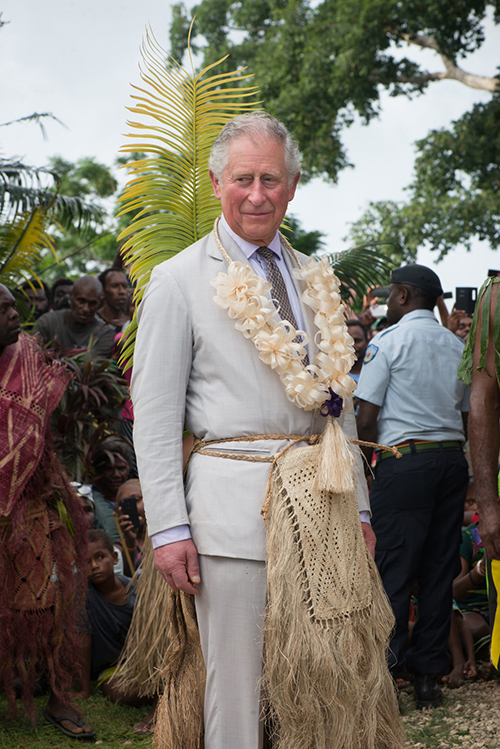 Taken together, the title, according to the Malvatumauri council of chiefs, is “more than just a high chief. It is a name that reflects authority that is wise and unwavering and whose roots are as old as the mountains, and whose mandate… stems from a higher existence….”

A nearly unprecedented gathering of high chiefs from across the country was present for the event, an honour extended only to few.

Once the ceremony was complete, the entire delegation accompanied the Prince in an exuberant, uproarious procession led by kastom dancers from Tanna and other islands.

The procession led the Prince down to nearby Saralana Park, where a crowd of thousands stood by to welcome the Prince.

His first words of greeting, spoken in Bislama, or Vanuatu pidgin, were met with a resounding roar from the crowd.

At the end of the dance, Prince Charles was presented with a gift from a chief from one of the Tanna communities that claims Philip, the Duke of Edinburgh, as one of their own.

An honour guard of youth in kastom attire lined the front of the stage.

The Prince of Wales’ stay in Vanuatu was brief, but it was an occasion that will be remembered for some time to come.

The Prince Phillip followers achieved another coup before the day was done. In his final minutes before his departure, the Prince had a one-on-one encounter with JJ, who hails from Yakel village, at the heart of the Prince Philip community.

He passed on a message from the community to Charles’ father, and asked Charles to pass on a walking stick, to aid his return to Vanuatu some day. 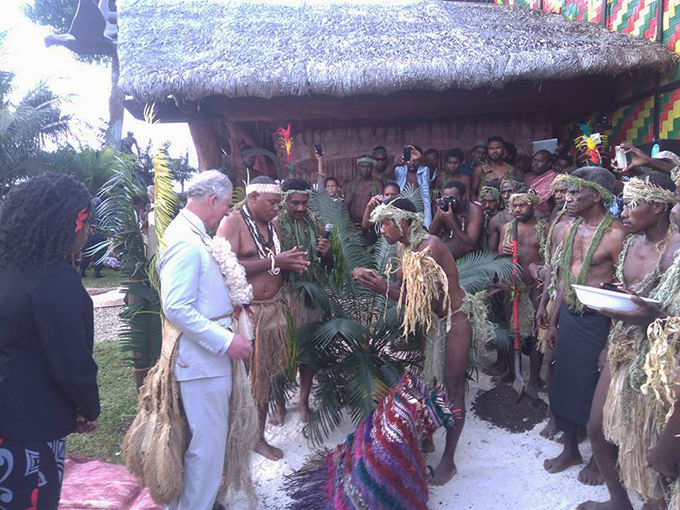